Blog  >  Aviation Business  >  Widerøe: the little airline that could

Widerøe: the little airline that could

One day back in March, at a time when the coronavirus crisis was picking up steam and cutting down airline operations across the world, something unusual happened. Widerøe, the little Norwegian airline running mostly domestic flights on Dash 8 turboprops, became the busiest passenger airline in Europe.

On March 23, according to Flightradar24 data, Widerøe had 178 departures, putting them ahead of other European passenger airlines including the likes of Lufthansa (with 143 departures that day) and SAS (with 170). The difference became even more pronounced over time. On April 29, for example, Widerøe had 194 departures, Lufthansa had 125 and SAS had 91. 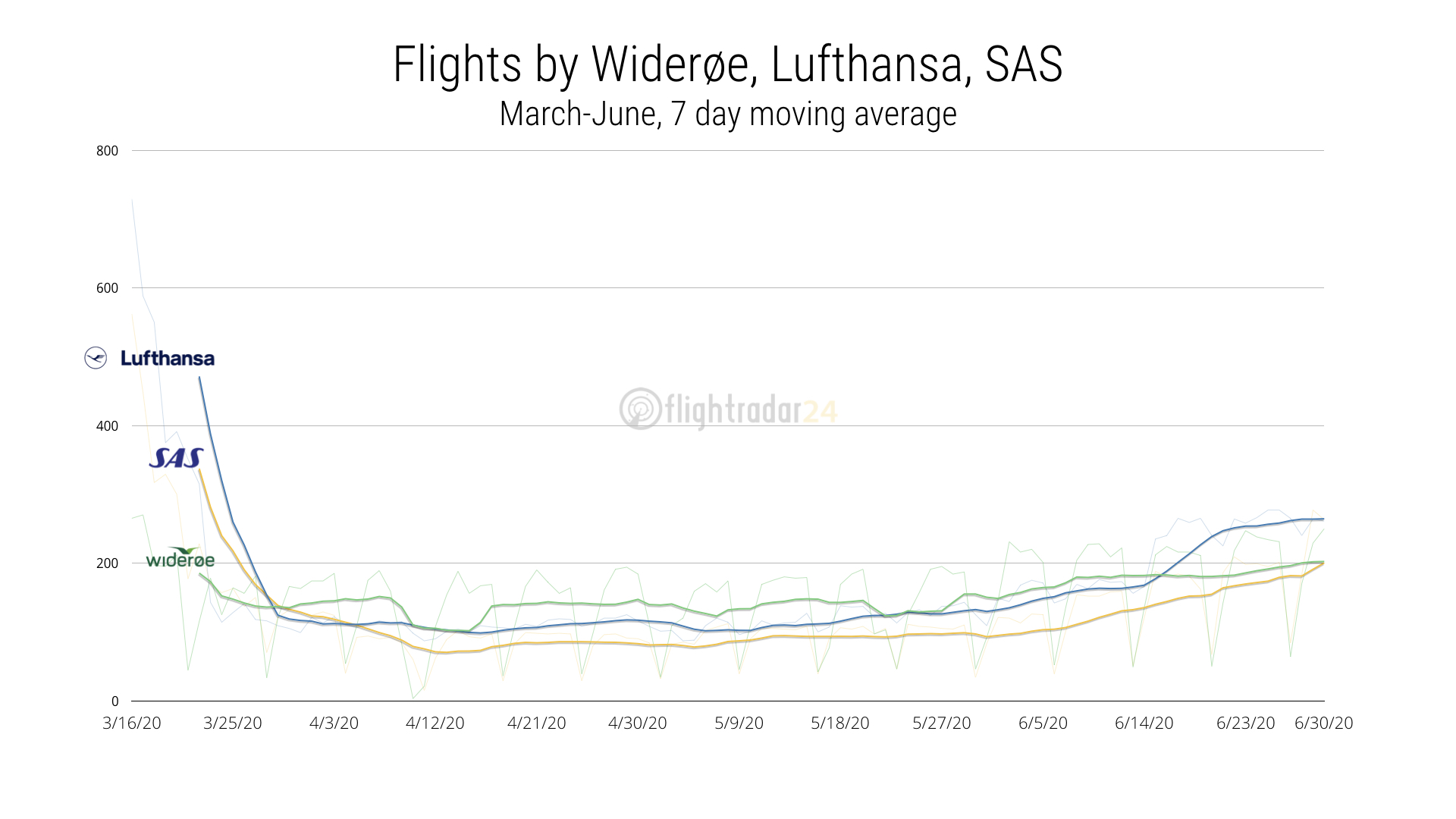 In June the larger flag carriers began adding flights back in earnest, and by now many have overtaken Widerøe. June 12 was the last date on which Widerøe had more departures than Lufthansa. While it may have been an intriguing novelty to be the biggest carrier in Europe for a time, the people at Widerøe say it’s not something they hope to see repeated.

“That was something we never experienced before,” said Catharina Solli, Widerøe’s Head of Communications. “And it’s something we hope we never do again. The coronavirus is the only reason we ended up on top, and really it was sad, because it showed how all our colleagues in the industry are suffering.”

During the worst of the crisis, it was especially necessary for an airline like Widerøe to continue flying, and to do so to every small airport that was still open (some were temporarily closed where alternates within a reasonable distance were available). That’s because they provide the Norwegian equivalent of Essential Air Service in the US, routes which in Europe are referred to as Public Service Obligation (PSO). On PSO routes the government pays subsidies to ensure airlines continue to operate these flights even if they would otherwise have to operate at a loss. Remote communities rely on them to bring in critical supplies, fly people to get medical care and more. Norway has dozens of PSO routes—the most in Europe.

Travel through Norway’s west, with its majestic fjords, and in its remote Arctic north, with its rough weather and tricky terrain—and it’s apparent right away why air service is essential to this part of the world. Stunning landscapes often translate to difficult transport. Covering a distance of 50 miles in the western fjords might involve several hours of driving. And if an accident or a snowstorm closes a tunnel or a mountain pass, it might not be possible to reach a neighboring community for days. Widerøe’s network provides a necessary alternative to road and sea for those living far out in the Norwegian countryside.

“The fact that we kept up so much of our network has a lot to do with our government. They were the ones to say we needed to continue flying,” explained Catharina Solli. “We fly people in and out of hospitals. We fly oil and energy workers. Through this whole period Bergen-Aberdeen [an important oil route] has been fully booked. A month or two into this we added an extra daily roundtrip. We also put Stavanger-Aberdeen back in.”

“People need to go to work,” Solli continued. “A lot of companies have opted for charters too, where they buy the whole aircraft to only carry their own employees. For instance today we have two aircraft doing 15 charters. It’s like a bus. Picking up, stopping, all over the place. So that these companies can keep their employees safe.”

Flying in the fjords

Last week I took my first flights since early March, and as it happens I needed to reach some of these more remote Norwegian communities. Naturally I ended up on a handful of Widerøe flights, and it was a great way to return to flying. Widerøe might just be one of the world’s more likable airlines. Partly that’s down to the fact that it’s small and capable, with friendly crew who seem genuinely happy to do what they do. You can tell the people at Widerøe know this part of the world like no one else, and that the airline attracts pilots who really enjoy flying.

Before my first flight, WF153 from Oslo to Sandane, I had a chat with Captain Knut Skogvold. He’s been flying with Widerøe for 20 years, and he beamed as he described what it’s like to fly the classic Dash 8, a staple of the Widerøe fleet.

“I love flying the Dash 8, and I love flying to these small airports around Norway. For me it’s a lifestyle,” Skogvold explained with a big smile, pointing out that although Widerøe has the larger and more modern Embraer E2, he has no desire to upgrade. “I’ve had the opportunity to go fly the bigger ones, but I like flying these. I like to do the hand-work. It’s more manual, it’s really flying.”

About the day’s destination airport, Sandane (SDN), he seemed especially excited, a remarkable thing when considering how many times he must have landed there in 20 years. “Sandane is one of the best ones, and one of the more challenging,” he said. “The field is curved, it’s short, you’ve got water on both sides. It’s quite special!”

A good deal of Widerøe’s charm comes from that fleet of classic Dash 8-100, -200 and -300 turboprops – hardy machines that are adept at handling seriously short runways and capable of putting up with whatever conditions nature might throw at them. For an aviation enthusiast, the airline offers an incredible chance to fly these increasingly rare props, and to do so in some of the most stunning landscapes on earth. Widerøe flies 26 of the smaller -100 and -200 variants, and 6 of the lightly stretched -300. It also counts 11 of the newer, 78-seater Dash 8-Q400, and 4 Embraer E190-E2 jets among its fleet. The fact that all its planes are painted in a shade of green that perfectly matches the glacier-tinted water below is just a bonus.

The approach into Sandane lived up to the hype, as our Dash 8 -100 LN-WIF dove down between the massive fjords, bouncing around in the wind. Luckily the typically unpredictable weather in this part of the world was kind to us, with clear and sunny conditions and beautiful views.

The free seating, small, classic cabin and easygoing atmosphere on board added to the experience, recalling something from another era. Some of the flights in the western fjords aren’t more than 20 or 30 minutes long (Oslo to Sandane is relatively long at roughly 50 minutes), and routes can often involve several takeoffs and landings. On my second day of flying I took three segments, none over half an hour, routing Sandane-Sogndal-Bergen-Stavanger. The weather was a little less friendly but the flying was equally unique.

Aside from the fact that everyone had to wear masks (only the pilots are exempt from this), it was almost easy to forget that we were flying in the time of COVID-19, and that airlines around the world are still hurting, running greatly diminished operations even as many begin to add flights back slowly and cautiously. There were enough people around to make the tiny airports of western Norway look and feel active, unlike the experience of walking through Oslo or Stavanger airports, where the closed-down shops and lack of foot traffic was a constant reminder that aviation is not yet out of the woods.

Another fun fact: it turns out that Widerøe didn’t park a single aircraft during the worst of the downturn this spring. It’s one of very few airlines globally that can claim that distinction. To be sure, its aircraft have had more downtime, as some frequencies have been reduced. And combined with the fact that only half the seats are being sold, passenger numbers have dropped compared to normal operations. But the airline has been able to keep things going to a greater extent than just about every other airline in the world.

The next decade should be interesting for Widerøe. By 2030 the airline plans to replace its aging Dash 8’s, but so far it’s not clear what the replacement will be. They’re actively looking at options and have been working alongside engine manufacturers like Rolls Royce to help steer development. The hope is that an electric engine with enough power and reliability for these conditions can be incorporated onto a brand new aircraft that will be the new backbone of the fleet in the years ahead.

“It’s going to be a challenge soon,” said Catharina Solli. “You’ll see Widerøe is mentioned quite a lot in regards to the development of electric aviation technology. I had a conference call with Rolls Royce yesterday about this, in fact. By 2030 we need to replace 25-plus of our aircraft and we need to be able to serve these rural areas, so we’re working hard on that.”

For the moment, Widerøe is a bright spot in what has been an otherwise dim landscape for commercial aviation. Even if we all hope it never again becomes the busiest airline in Europe, we can all look forward to seeing what it does next.