Blog  >  Aviation Business  >  The 747 steps up: how the Queen’s cargo role has increased

The 747 steps up: how the Queen’s cargo role has increased

The first three years of this decade were supposed to see a gradual and dignified retirement of major airlines’ passenger 747 fleets. With COVID-19 upending fleet planning the world over, airlines are quickly retiring the Queen of the Skies in favor of more fuel-efficient twin-engine aircraft or to just downsize their fleets. Qantas, KLM, and British Airways have already completely removed the 747 from passenger service and Lufthansa’s 747-400s last flew passengers at the beginning of June. 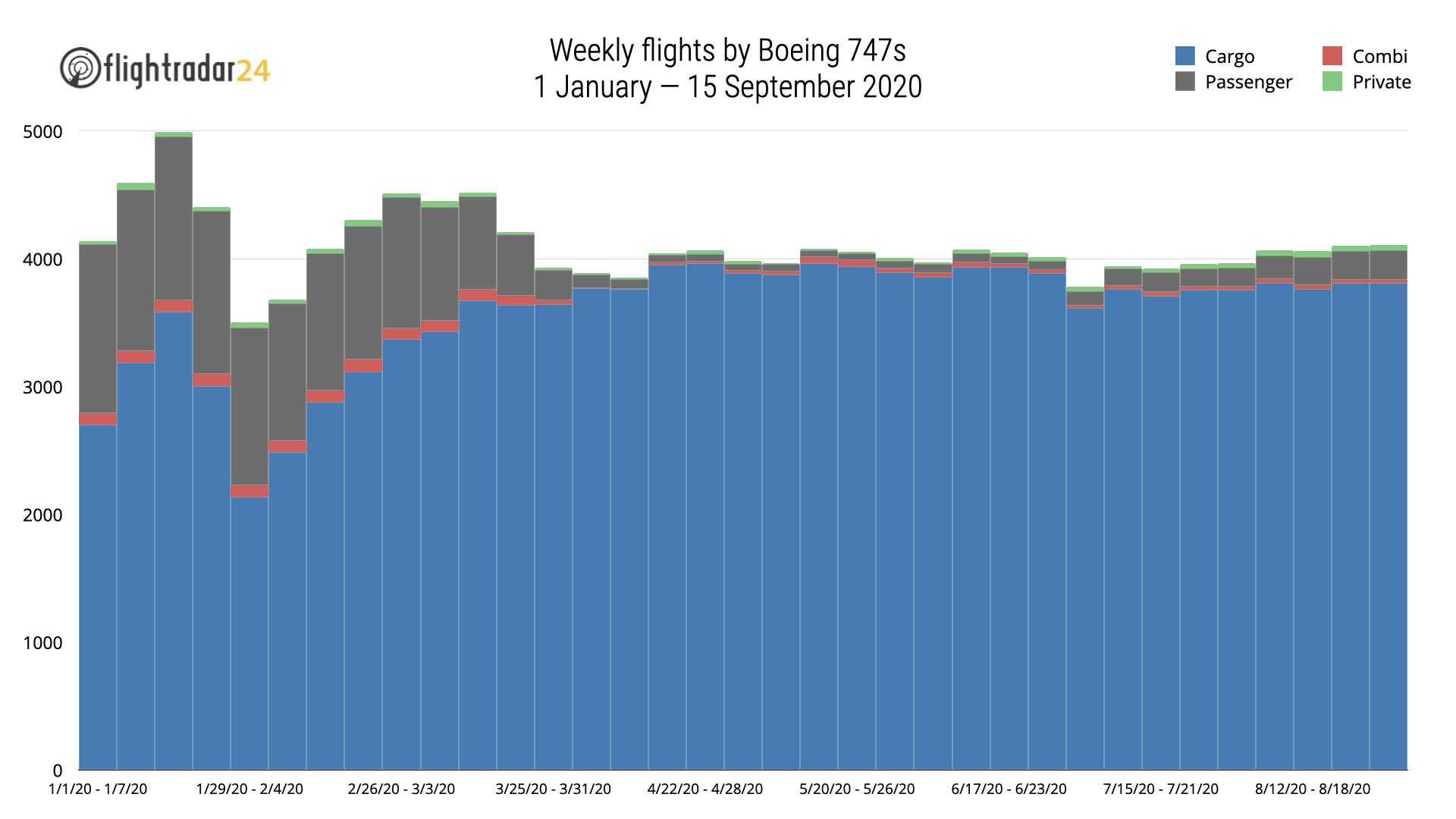 Meanwhile, cargo 747s are busier than ever, accounting for over 90% of all 747 flights at the end of August. At the low point for air travel in April, cargo 747s operated 98% of all 747 flights. Atlas Air and Cargolux increased their flying steadily to over 400 flights per week by mid-April. After a brief dip in early May, Atlas Air has continued to operate over 400 flights per week in nearly every week since mid-May. The cargo market shifted enough by April that UK-based CargoLogicAir, which had stopped operations in February, restarted flights to initially help ferry medical supplies from China.

As travel restrictions were implemented, the effects were most visible in the schedules of British Airways and Lufthansa where 747 flights dropped from over 300 flights per week at the beginning of the year to zero for British Airways and near zero for Lufthansa. Lufthansa idled its 747-400 fleet, keeping only its 747-8Is active. British Airways decided to permanently retire its entire fleet. Then in late June Russian carrier Rossiya launched an aggressive schedule making it the current busiest passenger 747 operator. 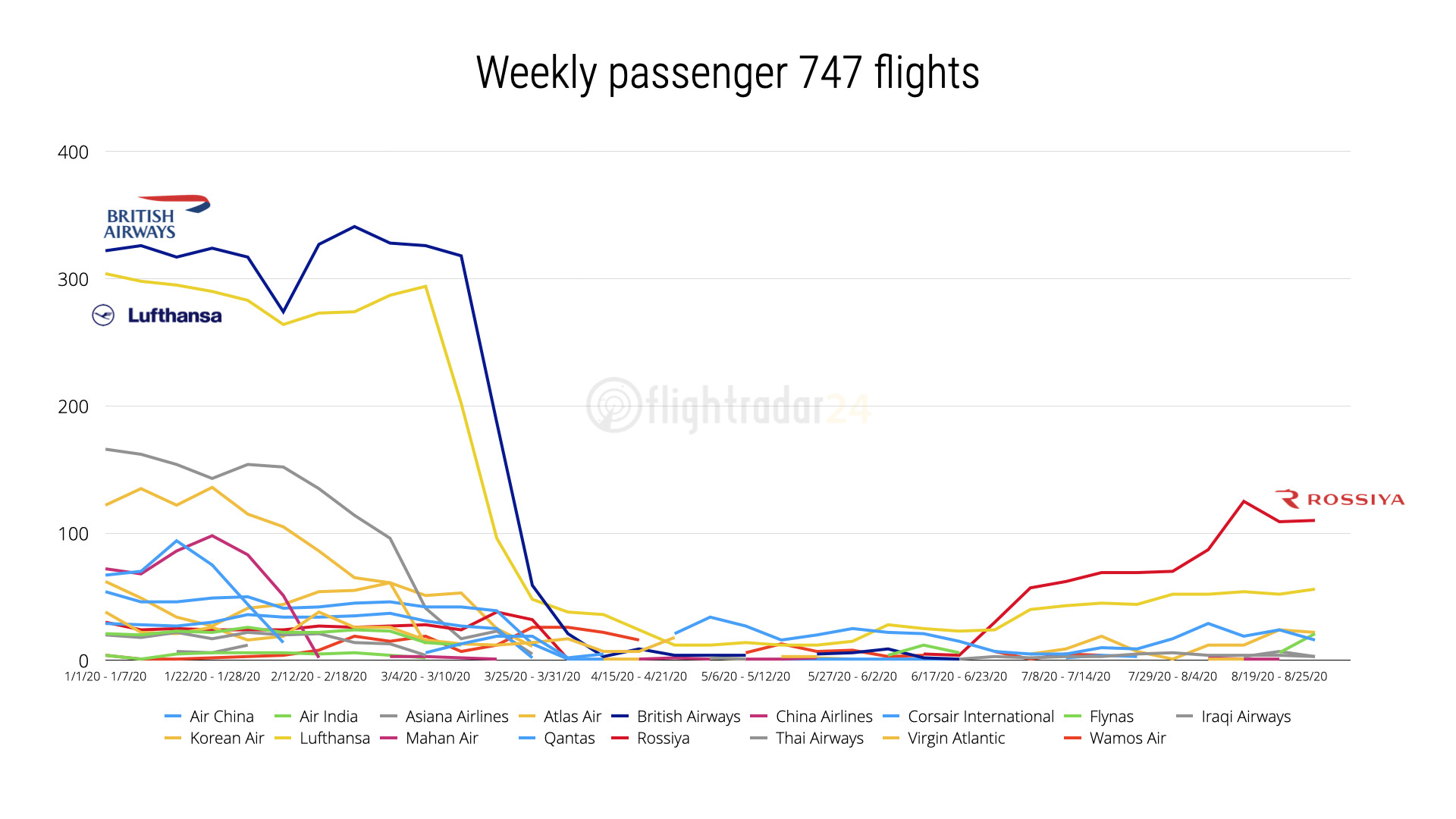 As passenger flights plummeted, major cargo airlines increased their flying to fill the hole left by the absence of belly cargo, which normally accounts for 50% of the air cargo market. Even with the advent of modified wide-body passenger aircraft used to carry freight in early May, the 747 remained busier than normal overall. 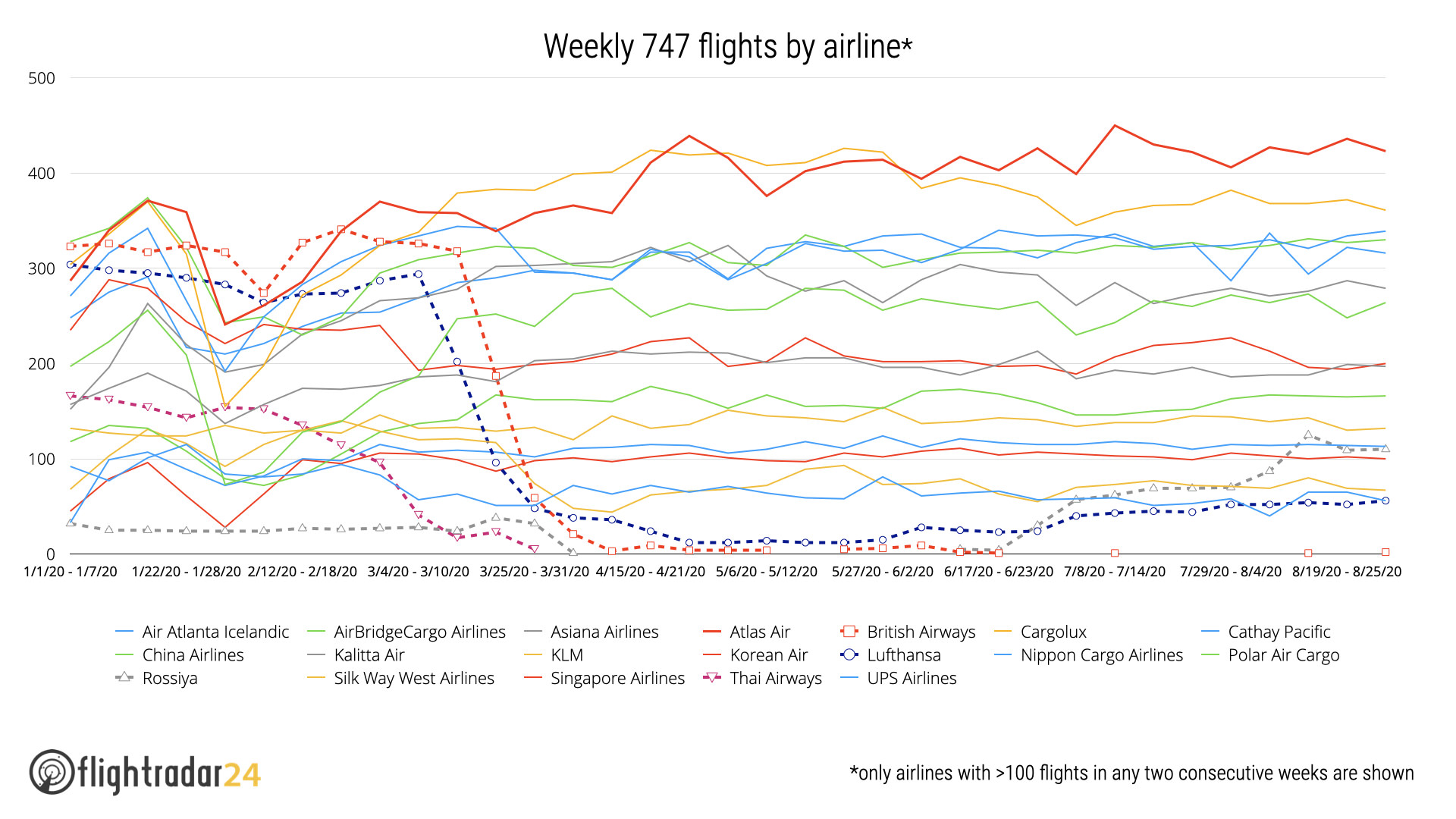 The total number of 747 flights remained remarkably stable this year, a marked contrast to all other aircraft types, and reflecting the demand for dedicated freighter capacity. 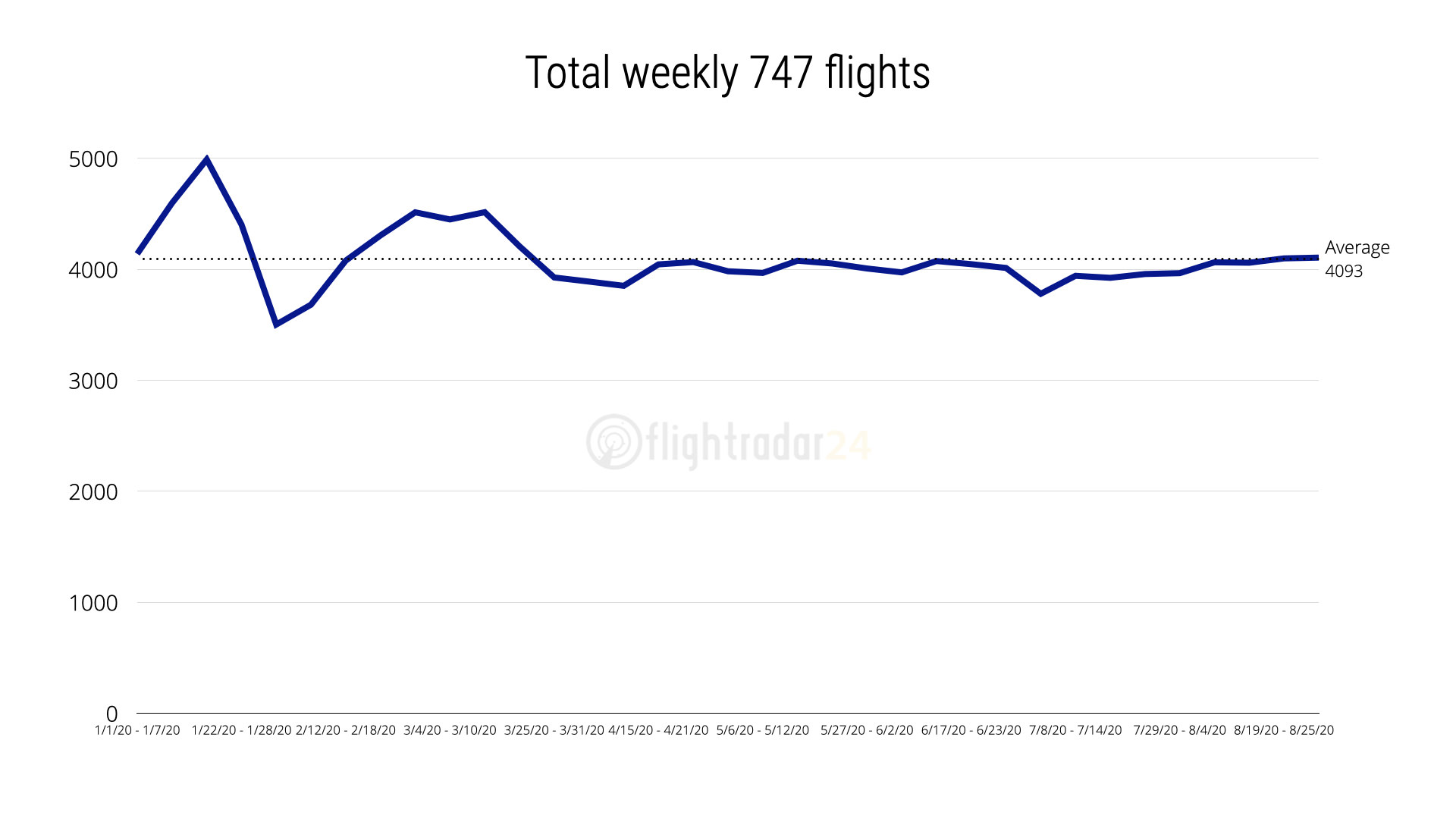 A side effect of the increase in cargo 747 operations—and cargo operations generally—has been a rise in flights in Anchorage. Perfectly situated along the great circle route between Asia and North America, Anchorage has long been a cargo hub. In 2020, Anchorage’s share of 747 flying has grown to over 20% of total flights, while traditional homes to large numbers of 747s like London and Frankfurt have fallen away. 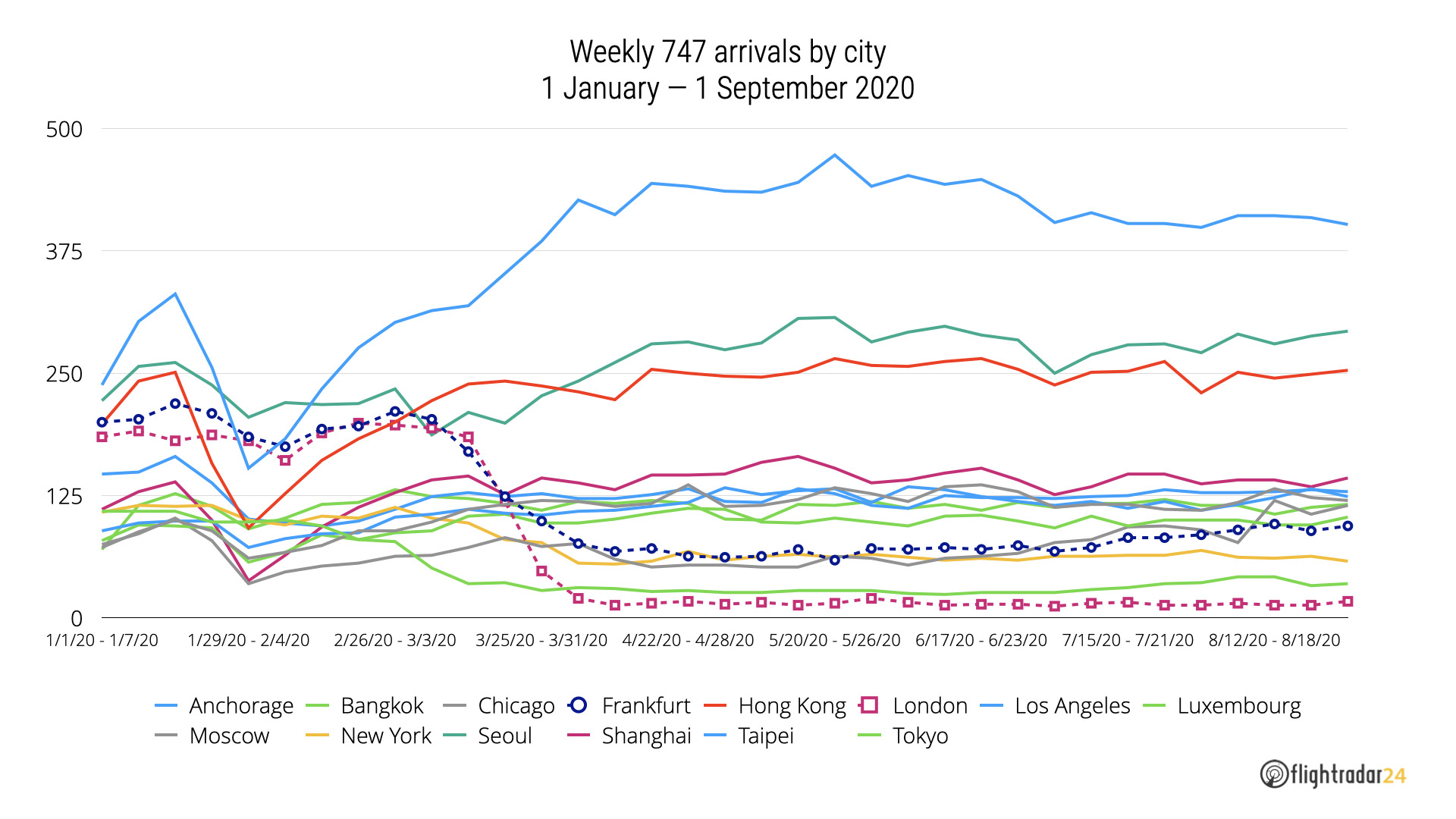 How long will passenger 747s remain?

Big questions remain, however: how close and how quickly will cargo approach 100% of all 747 flights? Earlier this summer, we looked at where you can still book a ticket on a passenger 747 flight. 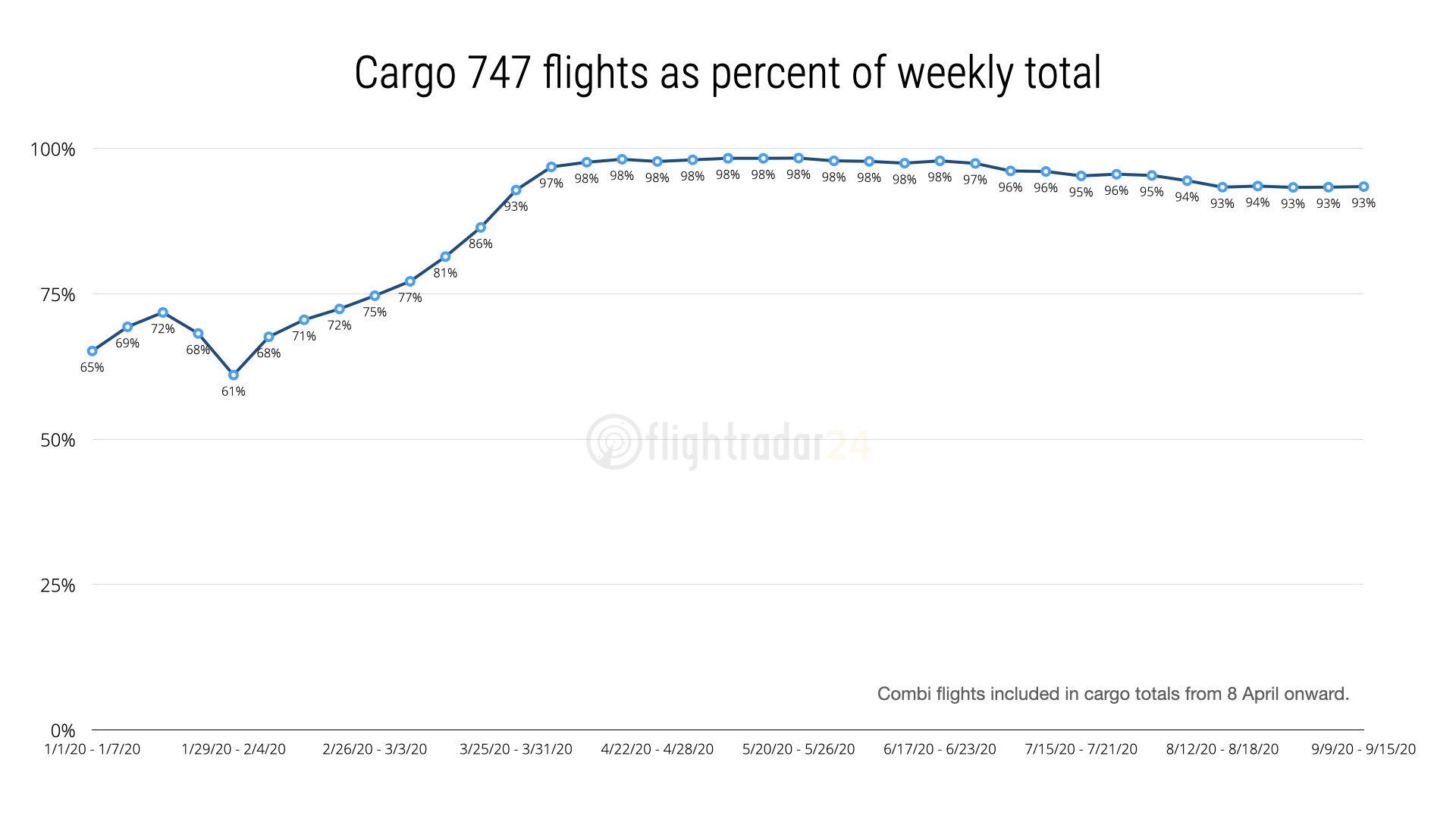