Pakistan International Airlines flight PK8303 crashed while attempting to landing in Karachi on 22 May. Flight 8303 was en route from Lahore when it crashed near the airport after conducting a go around and during its second landing attempt. The flight was operated by A320 AP-BLD.

Update 24 June: Pakistan’s Air Accident Investigation Board released a preliminary report on 24 June detailing the initial findings of the investigation, including Flight Data Recorder data showing the final minutes of the flight (Fig 21 below) and footage from a CCTV camera at the airport that captured the moment the aircraft’s engines scraped along the runway (Fig 22 below). Read the full report.

Update 2 June: The BEA reports that data from the recorders has been downloaded successfully and analysis is proceeding.


Update 28 May: The French Bureau d’Enquêtes et d’Analyses pour la Sécurité de l’Aviation civile (BEA) announced that the Cockpit Voice Recorder (CVR) has been recovered. It, and the previously recovered Flight Data Recorder (FDR), will be analyzed in France by the BEA at the request of Pakistani authorities.

Update 27 May: Raw receiver data from the final 12 minutes of flight containing Calibrated altitude, barometric and inertial vertical rates and indicated and true airspeed is now available for download below.

This aircraft is tracked via MLAT, which means it did not broadcast position information via ADS-B. Flightradar24’s position data for MLAT tracked flights is calculated by the time difference of signal arrival to four receivers. If fewer than four receivers see the aircraft, position data cannot be calculated, thus limiting the positional data available for this flight. Altitude data is broadcast and altitude data was received from PK8303. 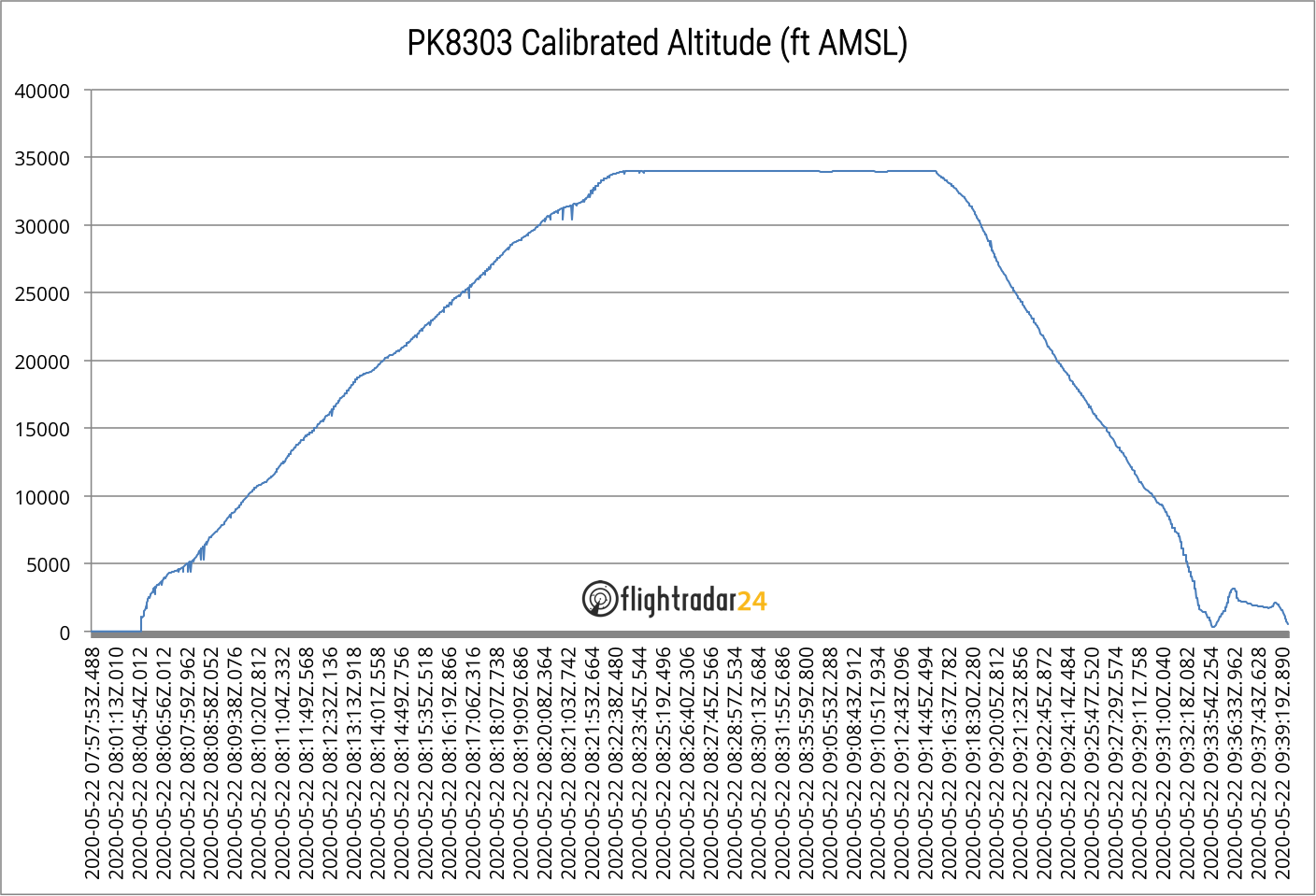 Altitude data show climb, cruise, and descent, followed by a go around and at least one additional landing attempt. 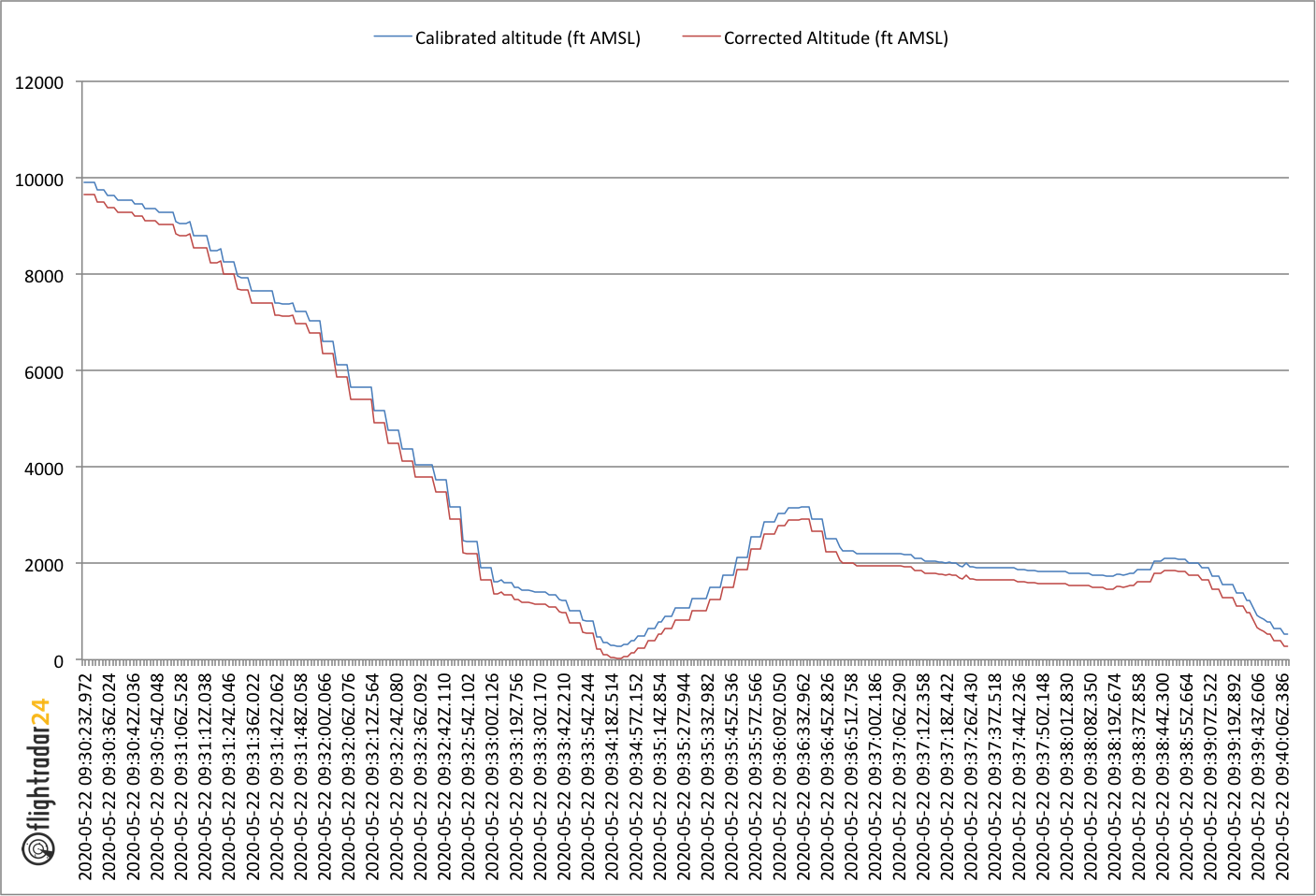 Flightradar24 has now retrieved and processed extended Mode S data from individual receivers in the area. Unlike ADS-B data, which always contains the same known data points, Extended Mode S may contain data from a variety of fields like aircraft identification, meteorological data, heading, speed, and others. The data sent varies based on the fields requested by the Secondary Surveillance Radar ground stations used by air traffic control.

The data sent via Extended Mode S does not include the Binary Data Selector (BDS) identifying the type of data. Flightradar24 interprets this data using advanced scripts and historical comparative data, but there may be errors in individual frames due to misinterpreted data fields. Overall trends in the data are correct as reported. We have included the raw data, downloadable below.

Included in much of the Extended Mode S data sent by PK8303 were data on Indicated airspeed. The below graph shows the aircraft’s calibrated altitude and Indicated airspeed from 10,000 feet to the final data received. 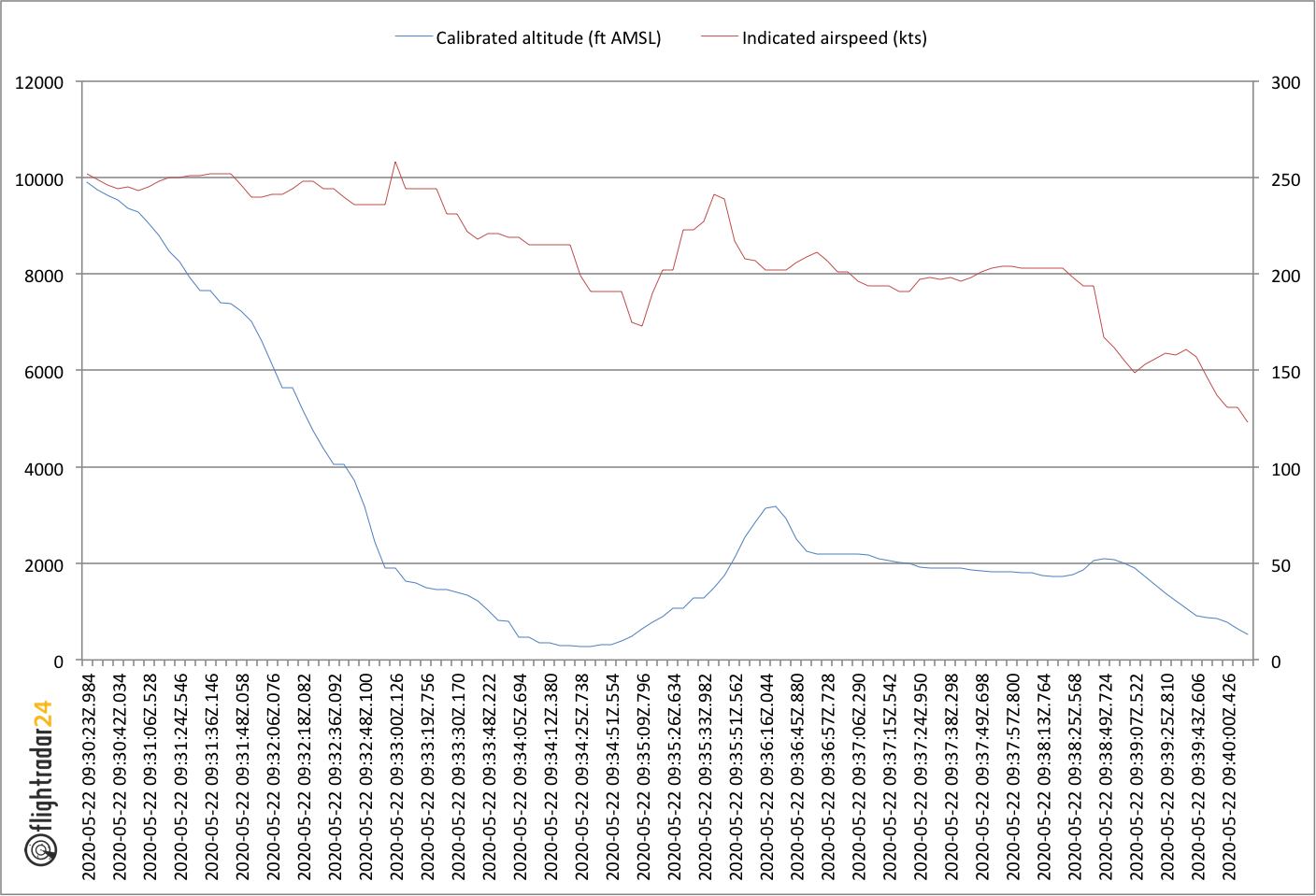 We have now also decoded additional raw receiver data encompassing approximately the final 12 minutes of flight. The data displayed below and available for download has not been processed by Flightradar24 systems, just decoded. 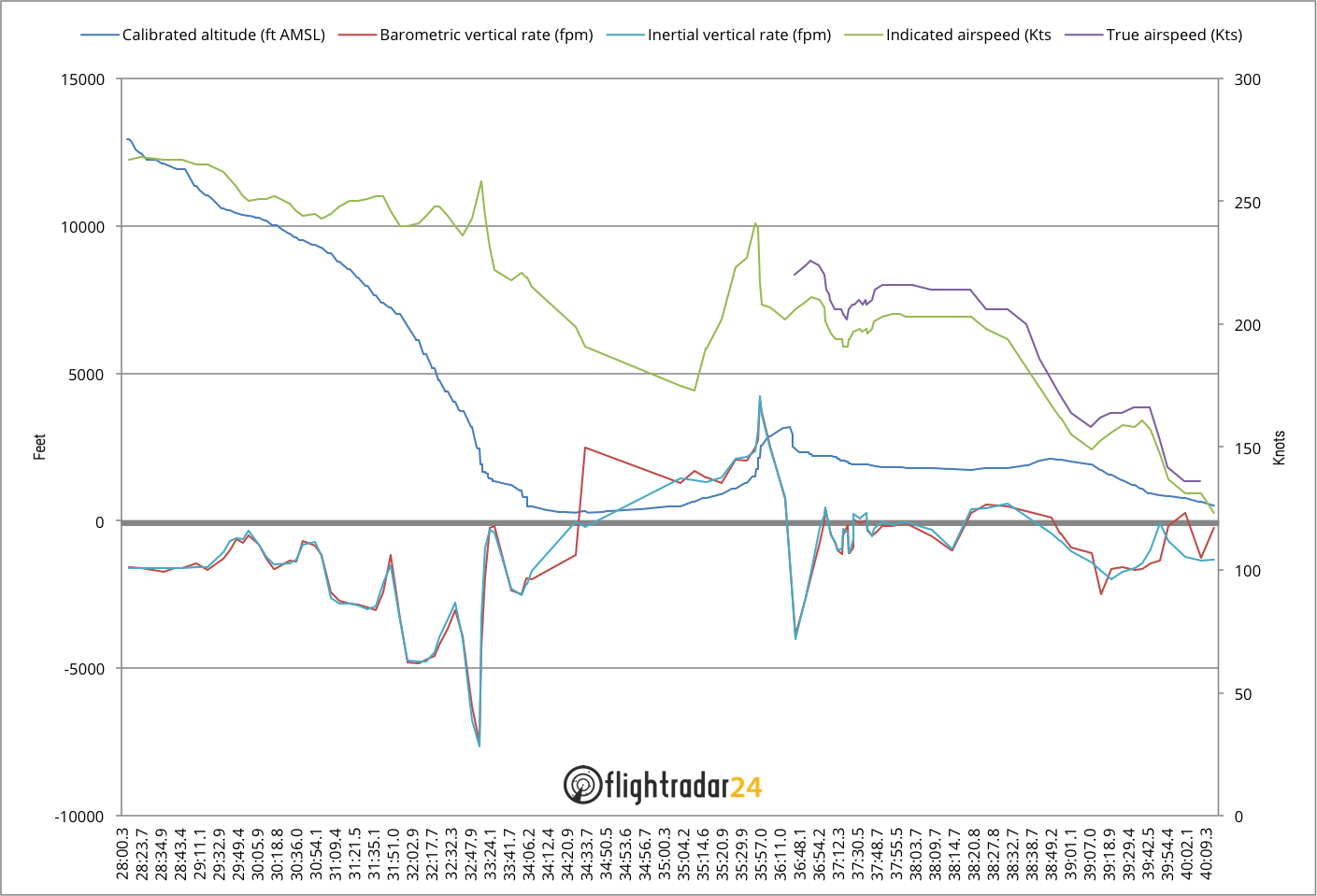 Near Lahore, data was received by at least four receivers allowing us to calculate positions for the flight for a short period of time. 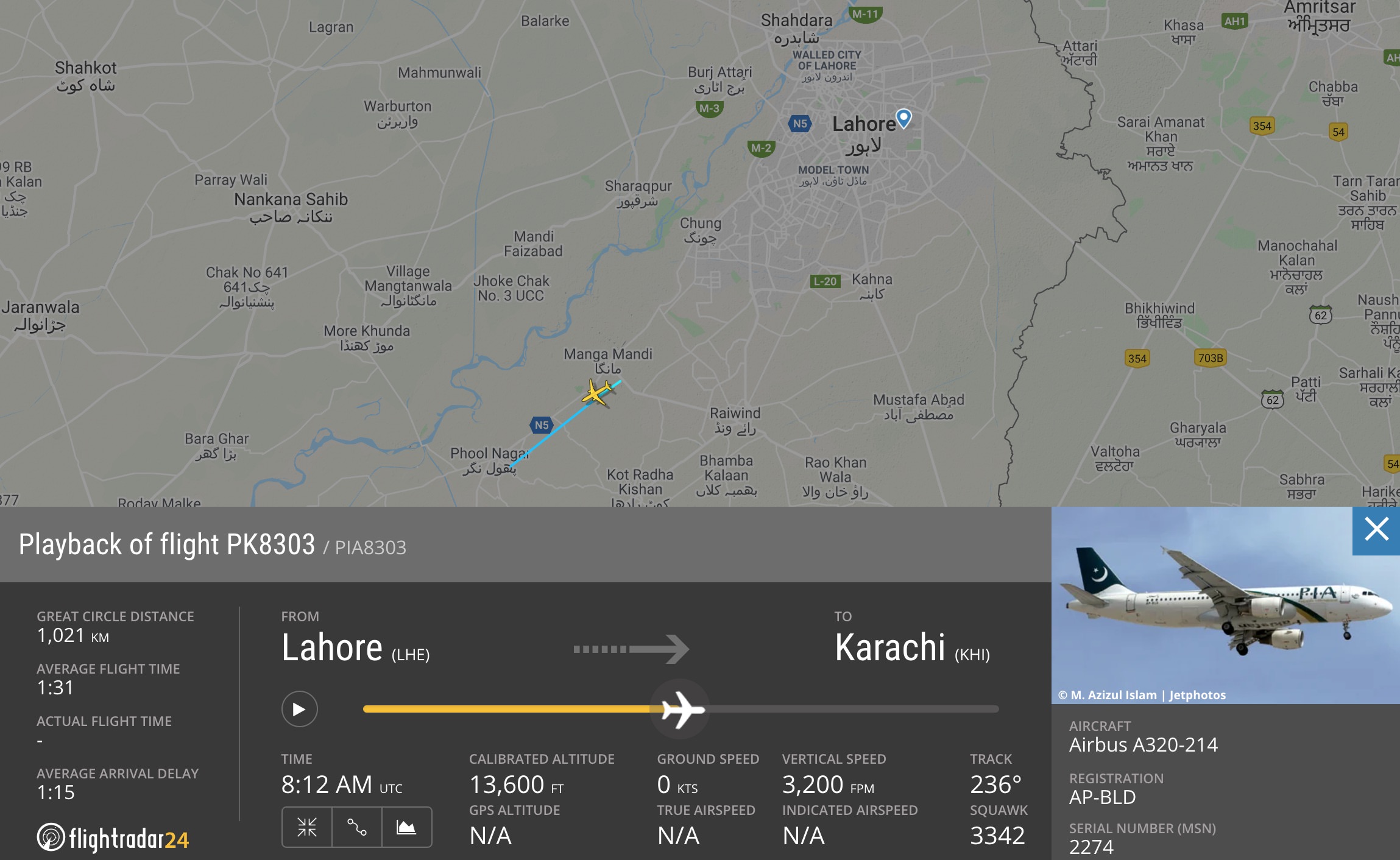 PK8303 was operated by A320 AP-BLD (MSN 2274). The aircraft is powered by two CFM-56 engines. Pakistan International Airlines acquired the A320 in October 2014. It was originally delivered to China Eastern Airlines in September 2004. 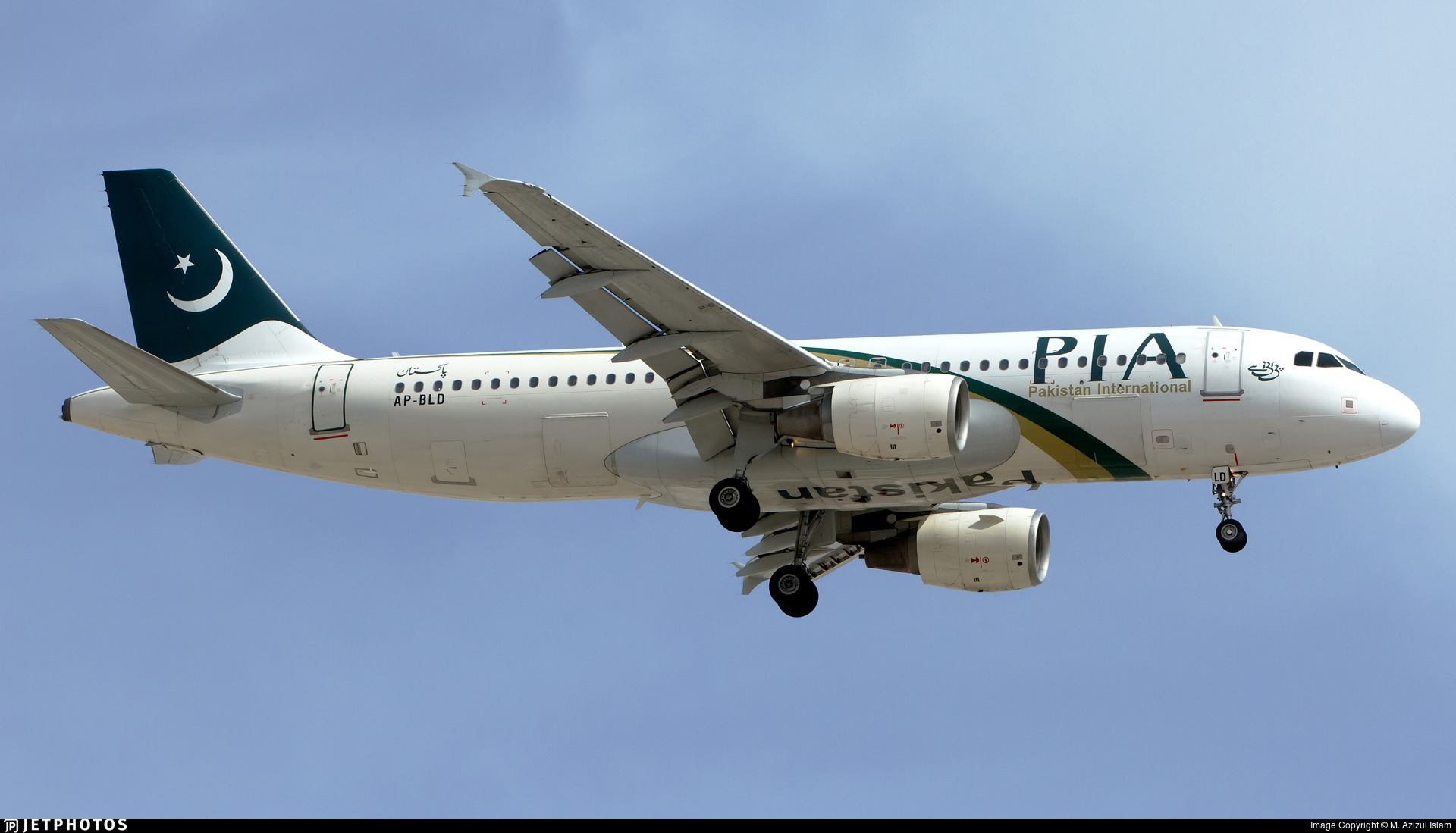