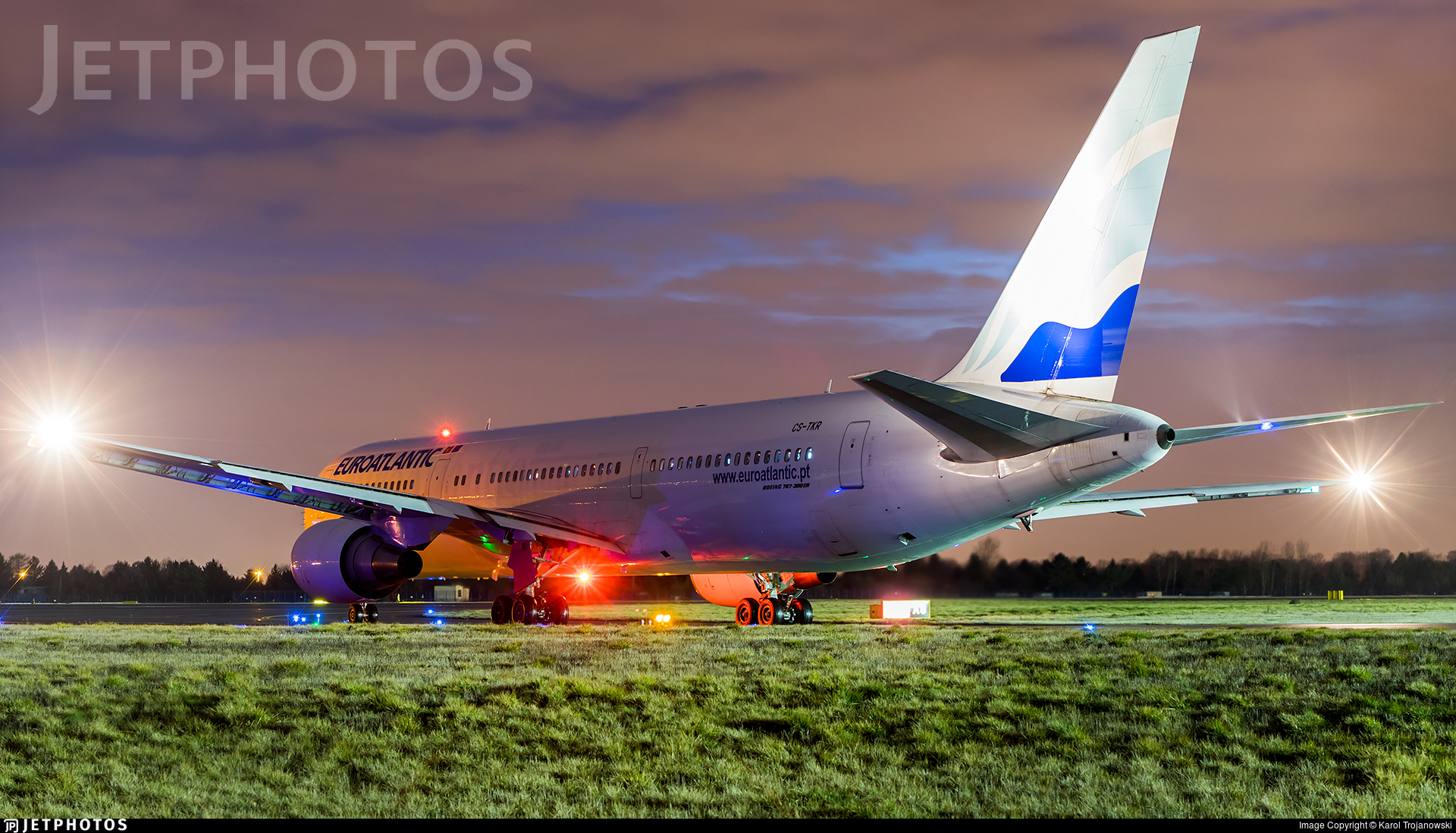 Many of the world’s flights are routine, daily operations between major cities. A handful of others, though, are much more mysterious. My favorite finds on Flightradar24 are those flights that pop up and require a little more research to understand. A little-known airline flying overhead, or a carrier flying well beyond its regular route map spotted while browsing the map. There’s usually a story behind it.

Yesterday my friend and colleague Alex Robertson Textor, editor of Fields & Stations and part-time Lisbon resident, tipped me off to one such flight. He had heard the takeoff from Lisbon (LIS) late at night and pulled up the Flightradar24 app to investigate. It turned out to be EuroAtlantic Airways, a lesser-known Portuguese charter airline – and the plane one of its 767-300s (CS-TKR). EuroAtlantic has six 767s in total, though this is the only one currently flying. This particular aircraft has been getting around to some fascinating places lately. It’s a regular visitor to Bissau (OXB), for example. And it occasionally pops over to Sao Tome (TMS) too.

What on earth is EuroAtlantic?

Those who’ve done some flying in Europe may have occasionally come across EuroAtlantic when a major carrier had to farm out flying due to a shortage of planes or an employee strike. Up until February it was operating TAP Portugal’s flights from Caracas to Lisbon. In fact I had the pleasure of flying on an ancient-looking EuroAtlantic 757 about a dozen years ago when British Airways had a strike and they brought in the airline, among others, to fill in some capacity. The flight was London to Lisbon. The experience wasn’t what anyone would call luxurious but for someone who likes airplanes it was fun. The 757 (CS-TFK) had no winglets (rare even in those days) and the seating was of a much older style with surprisingly low seat-backs which meant you could see the backs of people’s heads. That plane, first delivered in 1988 to LTU Sud, has since been scrapped.

Lisbon to Dili via Dubai

But anyway, back to our mystery flight. This EuroAtlantic flight was flying as flight YU671. And though it didn’t make its destination clear at the time, its eventual goal was Dili (DIL), capital of Timor-Leste. The flight would operate via Dubai (DWC), presumably just as a tech stop to refuel. That’s just over a 9,000-mile journey (close to 15,000 kilometers), and the city pair is obscure to say the least. The question then was: why?

Not the first time

As it turns out this flight has happened once before, although in that case the plane stopped off at Kuala Lumpur (KUL) between Dubai and Dili as well. That was back in September, and the flight got a bit of press in Timor-Leste. The plane arrived with 195 passengers according to the article. EuroAtlantic says this 767 has 262 seats, so considering how obscure the flight would seem to be, that’s not a bad passenger count.

And it sounds as if most were traveling because of study or work obligations. A handful of Timorese students were returning from several countries (after having been delayed by the pandemic), and a number of Portuguese teachers headed to work in Timor-Leste were aboard as well. So it seems that while the market for leisure travelers from Portugal to Timor-Leste is likely small (especially now) there are enough people needing to travel between the two that an occasional flight makes sense.

Of course this flight likely never would have happened if it weren’t for the colonial past between Portugal and Timor-Leste. That’s a long and complicated story, a summary of which can be found here.

This article from September indicates that EuroAtlantic has applied for permission to operate the Dili service monthly. That either didn’t pan out or is still under review, because for now these flights appear to be one-offs when the airline can fill some seats. If you go to the website you can actually book seats for two flights that they are running weekly in most cases – the aforementioned services from Lisbon to Sao Tome and Bissau (both formerly colonized by Portugal as well.) These aren’t exactly cheap, but for markets with little competition, they aren’t so bad either. It’s around 850 euros roundtrip in economy to Sao Tome later this month, for example. If you go in February, it’s closer to 500. But keep in mind that if you do go you have no choice but to stay at least a week – unless you want to turn right back around on the same plane.

An enigmatic and intriguing carrier

Looking into EuroAtlantic and its odd network yields all sorts of interesting bits of information and some unusual travel possibilities too. This sort of discovery is one of the best things about paying attention to airlines and what they do.

For more EuroAtlantic Airways fun, have a look at the below video. It includes some fun shots of a low-pass by one of the 767s, as well as a look inside the modernized cabin. It doesn’t look too bad, except that the 767 has eight seats across, which is very tight. And then at the end the music and editing gets downright suspenseful. Not the mood I would have chosen for an airline promotional video! Let us know what you think.