Over 4 million people visited Flightradar24.com on 16 April 2010. The site that day, much like these days, was remarkable for what you didn’t see. Nearly all flights in Europe and across the Atlantic Ocean were suspended for almost a week as ash from the eruption of the Eyjafjallajökull volcano on Iceland made safe flight in the area impossible.

The Flightradar24 network was much smaller then (as were the images being stored by twitter), but you can see the empty skies over northern Europe. 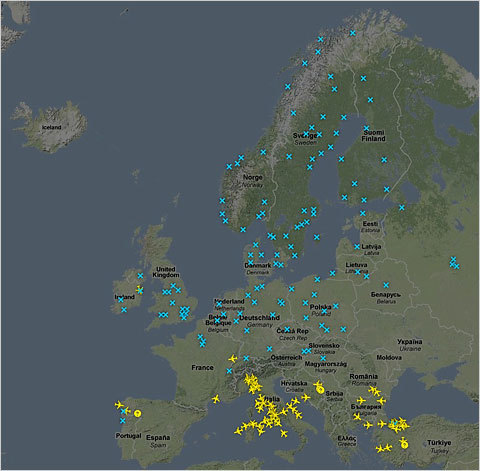 On 17 April 2010, KLM completed a low altitude test flight to ensure the air quality was sufficient for safe flight. This image was captured on 17 April and sent as part of our third tweet ever.

And by 18 April, flights began to operate again. Our friends at itoWorld built this visualization in 2010 where it’s possible to see the sudden increase in flights on 18 April and the real resurgence of traffic on 20 April.