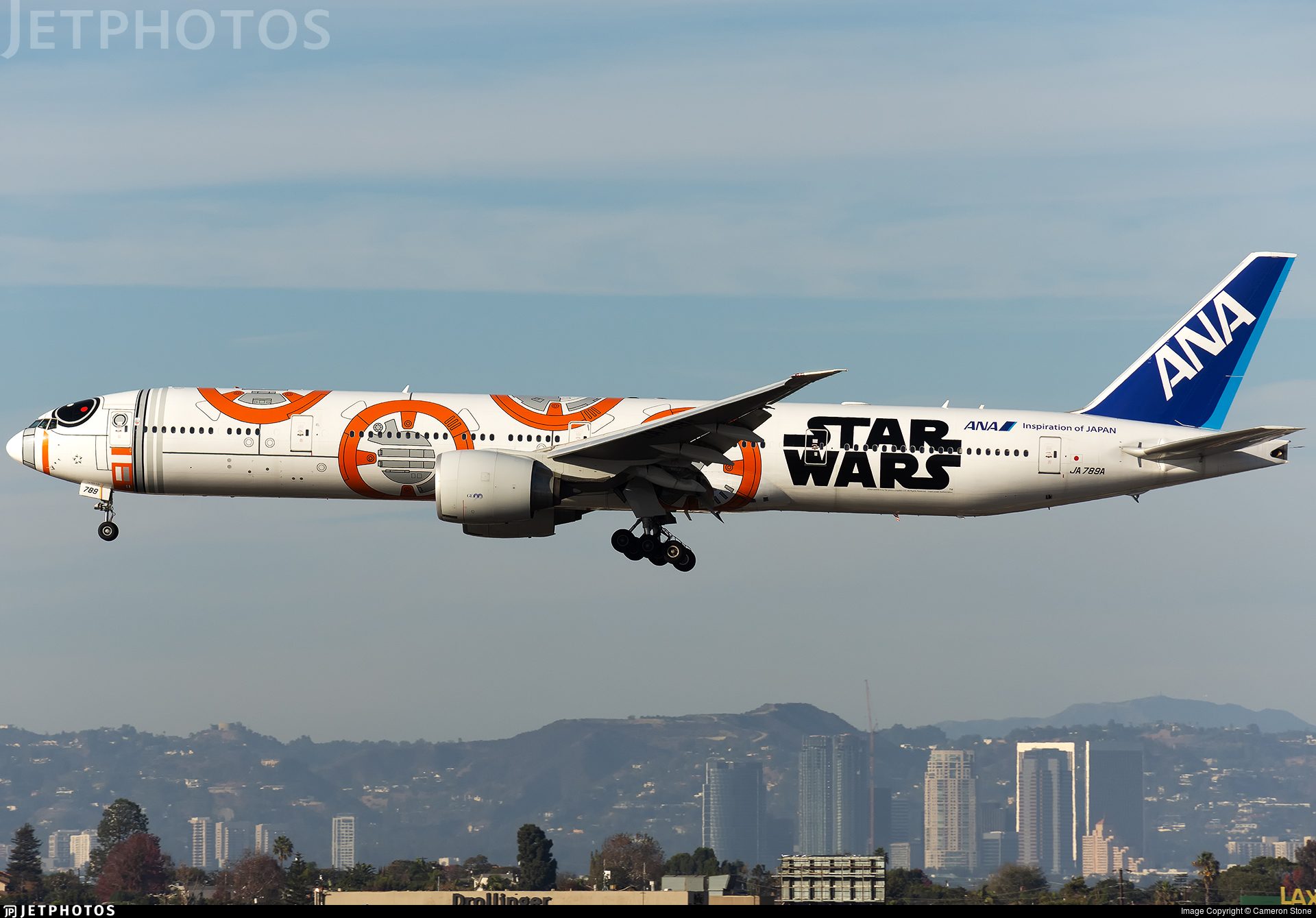 Like many countries in Asia, Japan has kept the coronavirus from spreading rampant within its borders. Good news for the Japanese, though one downside for the rest of us is that the country has been largely closed to outsiders. There has been talk of a potential, very careful reopening from April next year, but this remains talk for now. Aside from returning citizens and residents, the only people flying in and out have been a very small number of business travelers from approved countries.

With that in mind, it’s surprising to see just how much the two major Japanese airlines, All Nippon Airways (NH) and Japan Airlines (JL) have been flying this autumn. Considering Japan’s previously booming tourism sector was more or less shut down overnight, they’re managing to operate quite a few flights. Looking at Flightradar24’s tracking data, here are some of the trends we’ve noticed.

Japan Airlines is closing the gap

JAL (along with its domestic subsidiary J-Air) has noticeably closed the gap with ANA during the pandemic. Whereas in 2019 a typical autumn week at ANA would see roughly 5,500 flight departures in total, this year we’ve seen averages closer to 3,000 flights. During November of 2019 JAL and J-Air together had around 4,000 flights a week, whereas in recent weeks that total has been closer to 3,000. These numbers have fluctuated since September, but the total drop in flights has been much bigger at ANA. 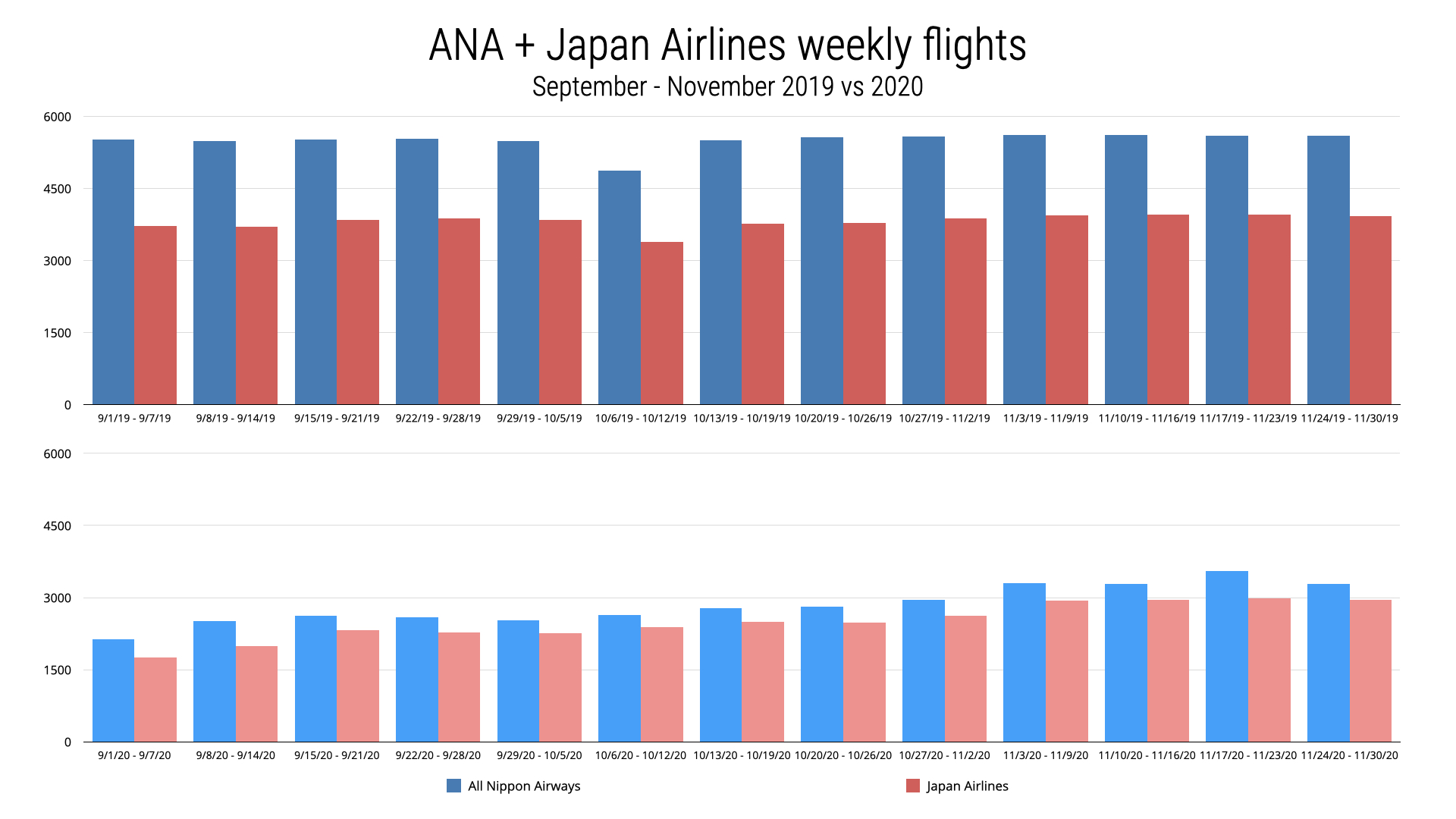 Both have been flying more recently

The total flight numbers from September compared to now show a marked increase in flying, even as Japan has barely opened its borders. From under 4,000 total flights across both carriers in the first week of September, departures topped 6,000 every week in November. The number of added flights are quite even comparing JAL and ANA – it appears that both have added roughly the same number of flights during this time. 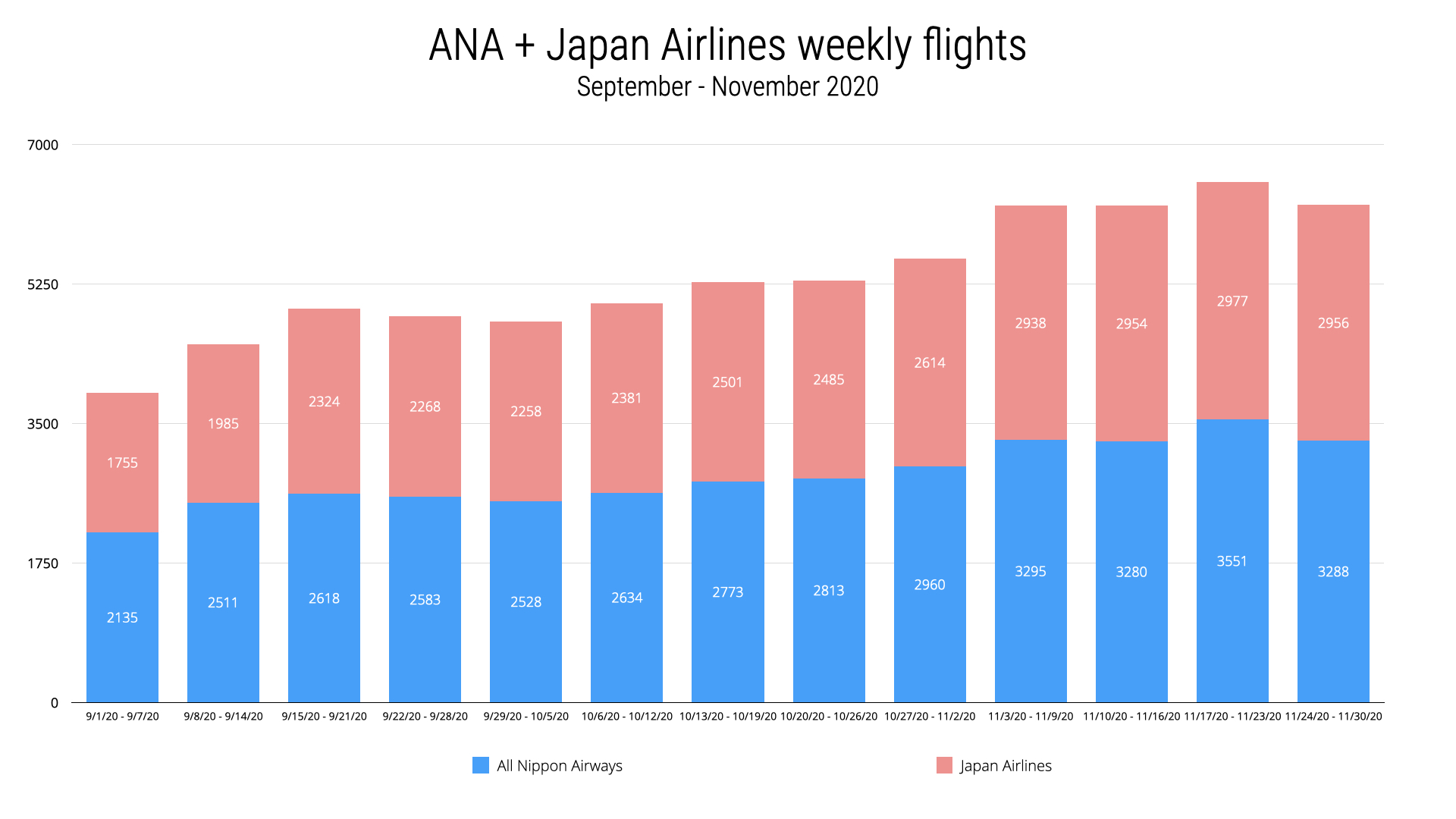 Japan Airlines, along with its mostly domestic J-Air subsidiary, has been moving towards flying a greater share of domestic flights than ever, especially in November of this year. Even when removing J-Air flights from the count, JAL’s share of domestic flights as a percentage of total flights jumped to 76% in November. A year ago that number of 67%. In fact while in 2019 ANA led JAL and its subsidiaries by quite a wide margin for number of domestic flights, JAL carriers have beaten ANA for total domestic flights in each of the last three months. All of which tells us that some of the boost to total flying figures of late is likely down to domestic schedule additions, and that JAL has been a lot more active on this front than ANA this year. 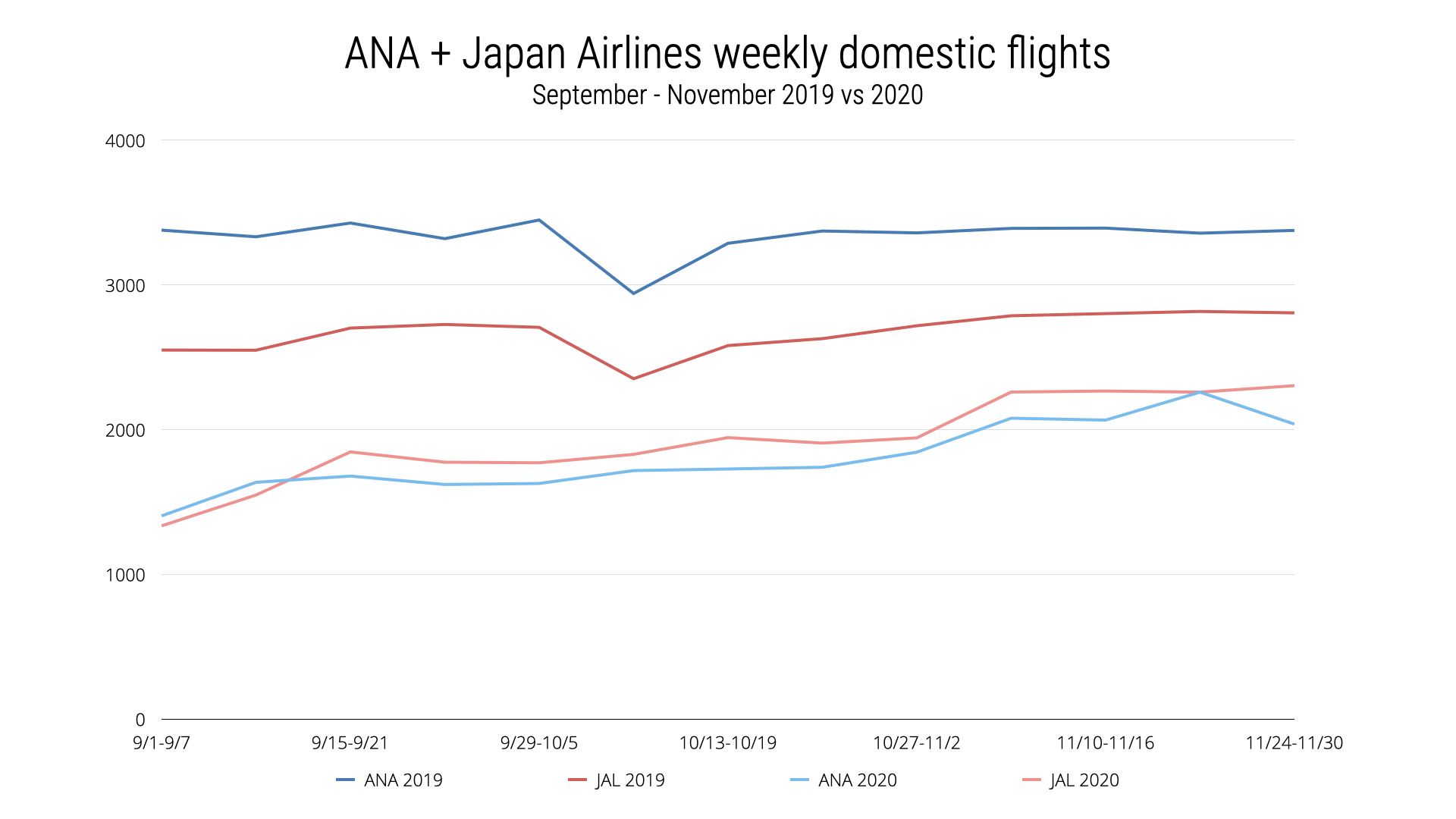 Some cities have more service than ever

That’s not true everywhere, though. While both ANA and JAL served Seoul (ICN and GMP) roughly three times a day in autumn 2019, during the same period this year ANA has had no flights from Korea and JAL has averaged one per week.

ANA’s domestic drawdown and JAL’s milder version of same is well illustrated by flight numbers out of Sapporo (CTS), on the northern island of Hokkaido. While ANA’s flights there have been nearly cut in half compared to 2019 (with nearly 300 in a normal week last year and closer to 160 or so this year), JAL’s have seen a more modest drop of about a quarter.

Rumors of a merger between the two

There are suggestions that the Japanese government is considering merging JAL and ANA in order to help stem losses suffered amid the coronavirus downturn. Many observers have noted that this would be a shame, and I would tend to agree. ANA and JAL are some of the best airlines in the world, and each has their own way of doing things. It would mean a great loss of choice for passengers and the reduced competition in Japan would probably leave everyone worse off (except perhaps the shareholders). At this point, though, I don’t expect this to actually happen. With any luck things will start to rebound soon and both airlines can return to profitability.

It should be an interesting few months ahead as we see how vaccine distribution shapes up and countries like Japan (that have played things very carefully thus far) begin to allow visitors back in. Especially with the rescheduled Tokyo Olympics supposedly on their way for next summer. Will it be a mostly virtual event? Or will it herald a return to freedom of movement and a heady summer full of flights and travel? Either way, I’ll be on one of the first planes in to Tokyo when they do. I know many others have similar plans.