Blog  >  Aviation Business  >  Is this the end of Norwegian Air?

Is this the end of Norwegian Air?

Norwegian Air has been on something of a meteoric rise during the past decade. Relatively unheard of not long ago, the airline quickly grew to the point that it seemed to be flying everywhere, from Krabi to Buenos Aires, not to mention blanketing Europe. Now, after months of pandemic pressure and with no bailout forthcoming from Norway, it appears the airline may be nearing the end of the road.

The number of flights it has operated over recent weeks was already a much diminished figure compared to the same period in 2019. That’s no surprise with ongoing transatlantic and Asian travel bans, and new lockdowns across Europe. 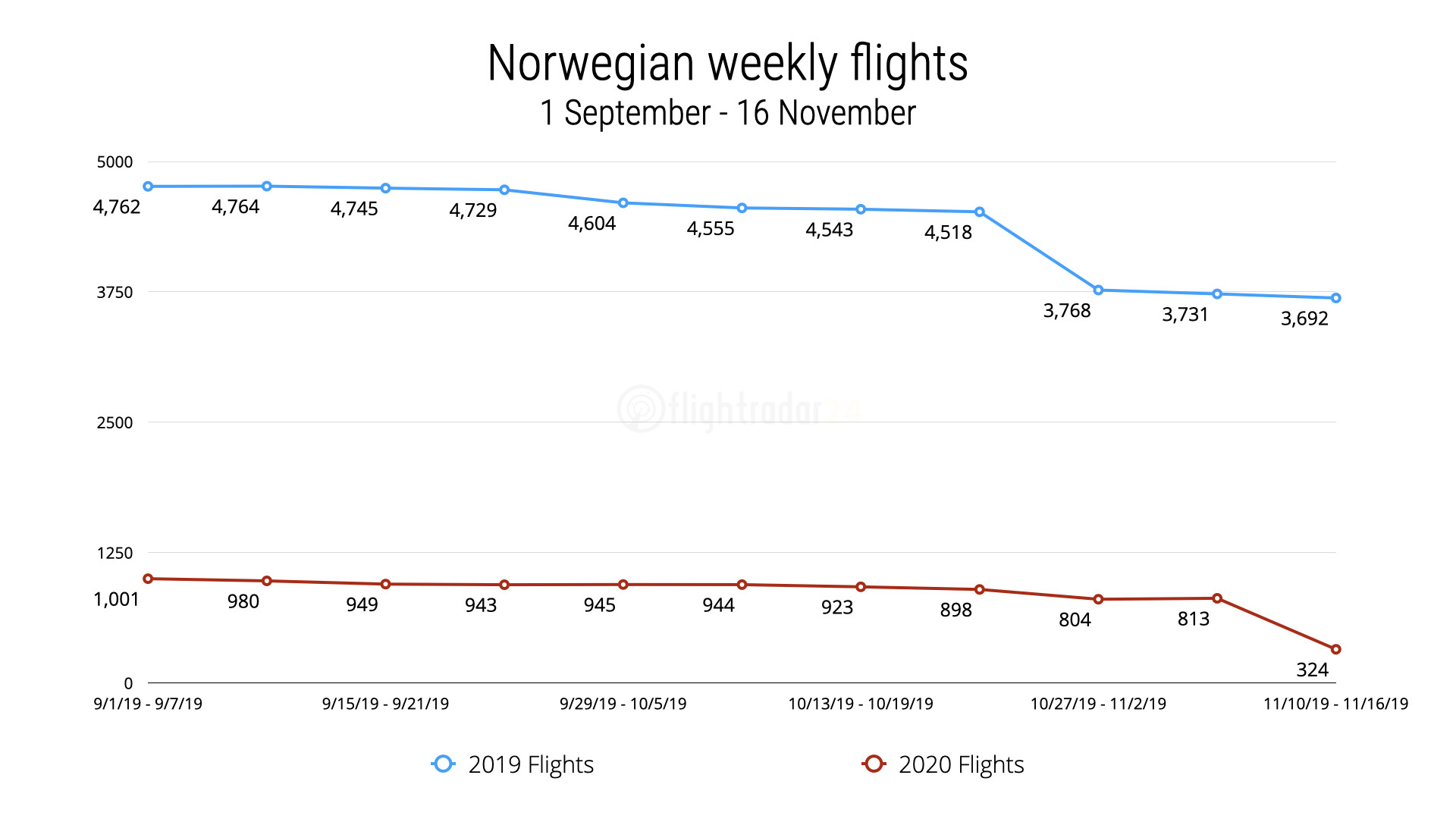 Over the past ten days though things have started to look much worse, with Norwegian cancelling many of its remaining intra-European flights and reduced mostly to operating only a small number of domestic sectors within Norway. The week from November 10 to November 16 saw just 324 total flights, compared to 3692 in the same week in 2019.

A network shrinking by the day

Those 324 flights in the week ending Monday were entirely in and out of Norwegian and Danish airports, plus just one flight each from the Swedish cities of Luleå, Umeå and Stockholm. And as of right now the airline is offering no service in Sweden whatsoever. It’s sobering to compare the full list of departure cities Norwegian was flying out of at this time last year to the much shorter one from this year. Norwegian planes flew in or out of just 19 cities in the week from November 10 to November 16. Exactly one year ago it served 100 different cities that week.

And then there’s the list of aircraft types. Because of Norwegian’s propensity to bring in wet-leased capacity fairly regularly, the lineup from 2019 looks like a who’s-who from Airbus and Boeing both (with a couple of Mad Dogs thrown in for good measure). That despite the fact that Norwegian’s own fleet is just three types: the 737-800, 787-8 and 787-9. This year, though? It’s nothing but the 737. The thought of all those Dreamliners just sitting around wrapped up for storage instead of flying is a little depressing.

Things haven’t been good for a while

Norwegian was in financial trouble well before the coronavirus came along. Many have argued it got ahead of itself and grew too fast, spawned too many sub-carriers. Indeed it can be difficult to keep track of all the separate airlines that actually make up Norwegian. In the early days it was Norwegian Air Shuttle. Then there was Norwegian Air International, Norwegian UK, Norwegan Sweden and so on. They even briefly tried to get an Argentina subsidiary going. In the end this turned out to be a problem for them, and not only because of the pace of growth.

Despite being Norwegian by name, much of the business has been moved offshore over the years, including a large chunk of it to Ireland (where they filed for bankruptcy this week) so that they could take advantage of less restrictive labor laws and a lower-cost workforce. It was not uncommon on long-haul Norwegian flights to be served by flight attendants from Bangkok or the US, with pilots from Spain.

A shift away from Scandinavia

On top of that the airline had recently started moving away from nonstop routes out of Oslo and other Scandinavian capitals in order to focus on more heavily-trafficked routes like London and Barcelona to New York. So when Norwegian came begging to the Norwegian government for cash to survive, it’s not terribly surprising that they said no. Not to mention that the ever-pragmatic folks in government in Oslo seem to know a shaky business model when they see one.

Is this the end of Norwegian Air?

Things aren’t officially over yet. Officially the airline is still in operation and looking to correct its course and find a way forward. Norwegian’s CEO Jacob Schram said as much when news of the bankruptcy in Ireland came out. “Our intent is clear. We will emerge from this process as a more financially secure and competitive airline, with a new financial structure, a rightsized fleet and improved customer offering.” That could well be true. But the rapid drawdown of flights in recent days alongside the latest bankruptcy filing doesn’t bode well. At some point soon Norwegian is going to run out of cash, with investors unlikely to want to inject more.

That would be a shame if so. If nothing else Norwegian dreamed big and made serious attempts to exploit gaps in the market. They started service on routes no one else would fly, especially out of Scandinavia. Their Stockholm (ARN) to Oakland (OAK) flight was incredibly useful for me to go visit family. Nowadays, I have no choice but to connect. And they lowered fares across the board. Those sub-$400 roundtrip fares that had become common across the Atlantic in recent years? In large part we have Norwegian to thank.

Perhaps the Norwegian experiment will turn out to have been a failed one. Or perhaps the airline will manage to regroup and reset, and emerge a more streamlined carrier, with a clearer focus. I would hope it might go back to its roots if so, focusing more attention on its natural home market of Scandinavia instead of getting into price wars with legacy airlines in London. Maybe if that happens there’ll be more sympathetic ears the next time a crisis comes around and a bailout is needed.