Indonesian investigators released their final Lion Air flight 610 crash report this morning, finding that Boeing’s design of the Maneuvering Characteristics Augmentation System (MCAS), the FAA’s certification of the system, the airline’s maintenance of the aircraft, and the pilots’ actions during the flight all contributed to the crash.

Flightradar24 data, including granular data from the flight may be found here.

The report is divided into 5 sections—Factual information, Analysis, Conclusions, Safety action, and Safety recommendations. You can read the full report at the link above or by clicking on the image below. The Lion Air 610 crash report opens in PDF. 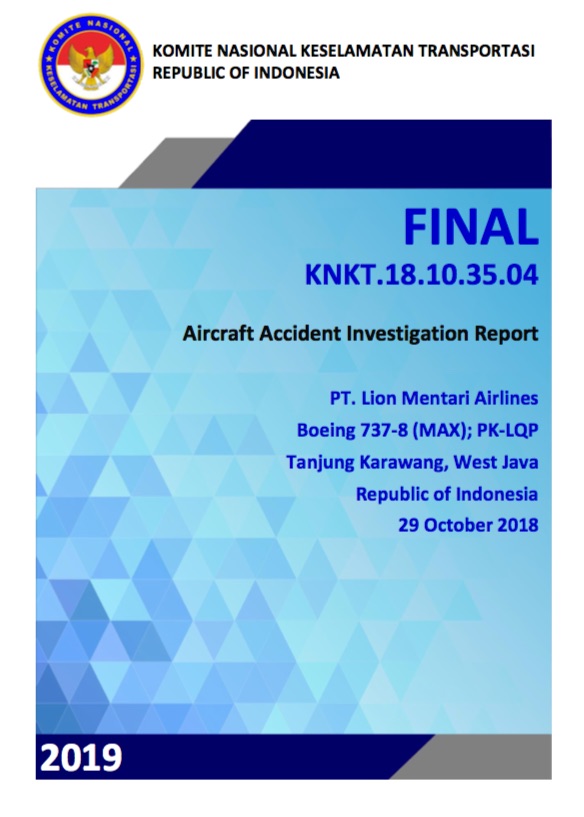 Boeing issued a statement on the final report saying, in part, ‘We are addressing the KNKT’s safety recommendations, and taking actions to enhance the safety of the 737 MAX to prevent the flight control conditions that occurred in this accident from ever happening again. Safety is an enduring value for everyone at Boeing and the safety of the flying public, our customers, and the crews aboard our airplanes is always our top priority. We value our long-standing partnership with Lion Air and we look forward to continuing to work together in the future.’

Over the past several months Boeing has been making changes to the 737 MAX. Most significantly, Boeing has redesigned the way Angle of Attack (AoA) sensors work with a feature of the flight control software known as Maneuvering Characteristics Augmentation System (MCAS). Going forward, MCAS will compare information from both AoA sensors before activating, adding a new layer of protection.

In addition, MCAS will now only turn on if both AoA sensors agree, will only activate once in response to erroneous AOA, and will always be subject to a maximum limit that can be overridden with the control column.