Not done yet: how to track the 87 remaining passenger 747s

Last week we covered British Airways’ 747 retirement announcement, as did many media outlets around the world. The fact that it made for such a big news event seems as good an indication as any that the 747 holds a special place in people’s hearts, whether “avgeek” or not. It feels like something of an understatement to say it is an iconic piece of aviation history. The 747 shaped global air travel as we know it today. And its unusual and graceful shape, immediately recognizable to many travelers, will be missed.

The British Airways retirement is a big deal because they had the largest passenger 747 fleet in the world, a handful of which they had recently repainted in commemorative retro liveries. The idea was that these would continue to fly around for some years yet. And then COVID-19 happened and all of a sudden the entire fleet is slated to be withdrawn from service.

With that in mind, here’s a look at how many 747s remain in active service and how long they are likely to stick around. This is an unusual time where a number of 747s that are still active are nevertheless parked, in some form of storage while airlines ride out the current crisis. Very few have continued to fly their 747s regularly since March. And yet, some have. And the silver lining in all of this is that there are a few airlines with the newer 747-8 in their fleets and those are less likely to be sent to the scrap heap, as many are just five or six years old. Still, the 747 has become a very rare bird indeed.

The remaining 747 passenger fleet, by the numbers

With the retirement of the British Airways fleet, the global number of active 747 passenger aircraft dropped below 100. Here’s the breakdown of the remaining fleet. 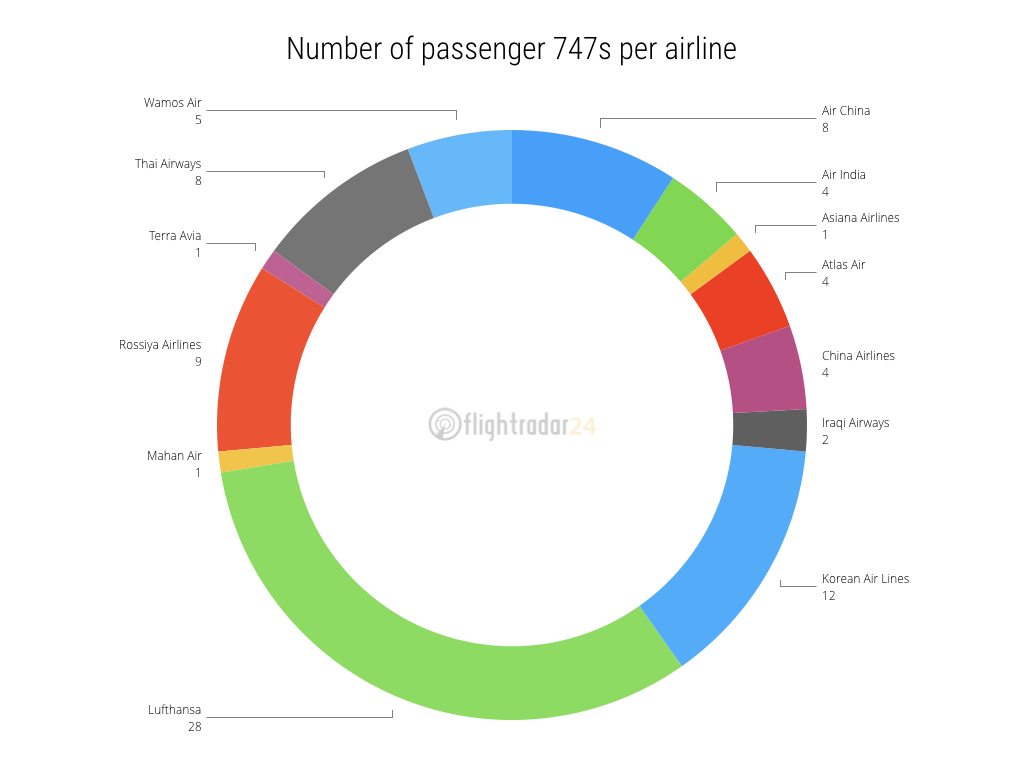 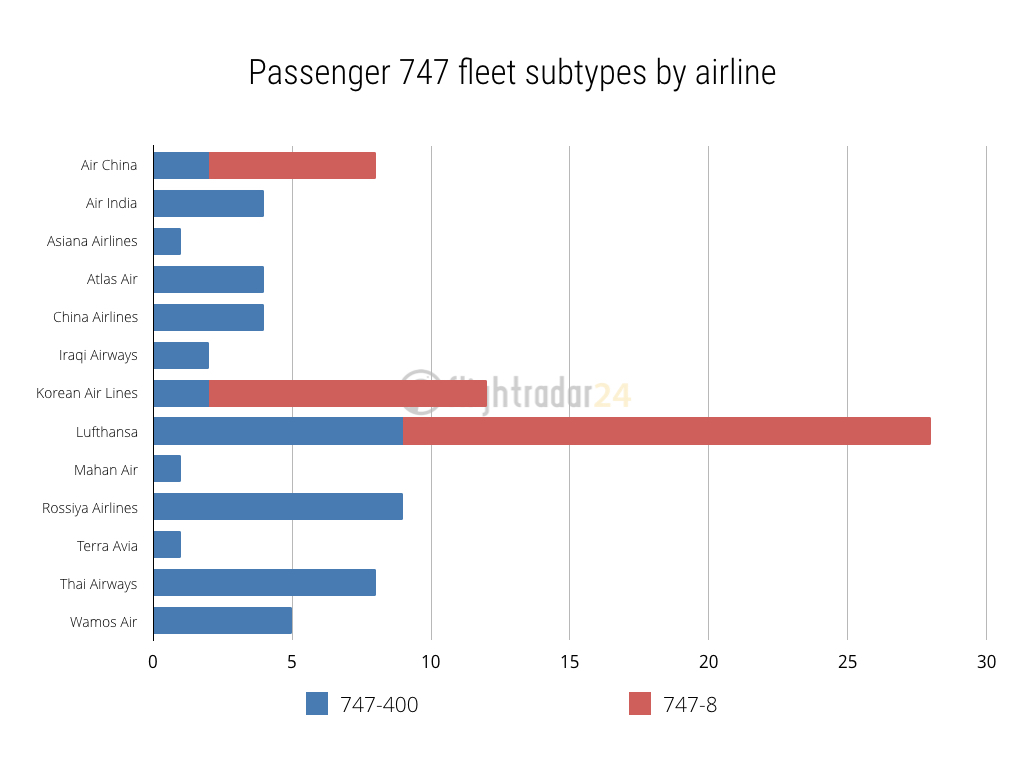 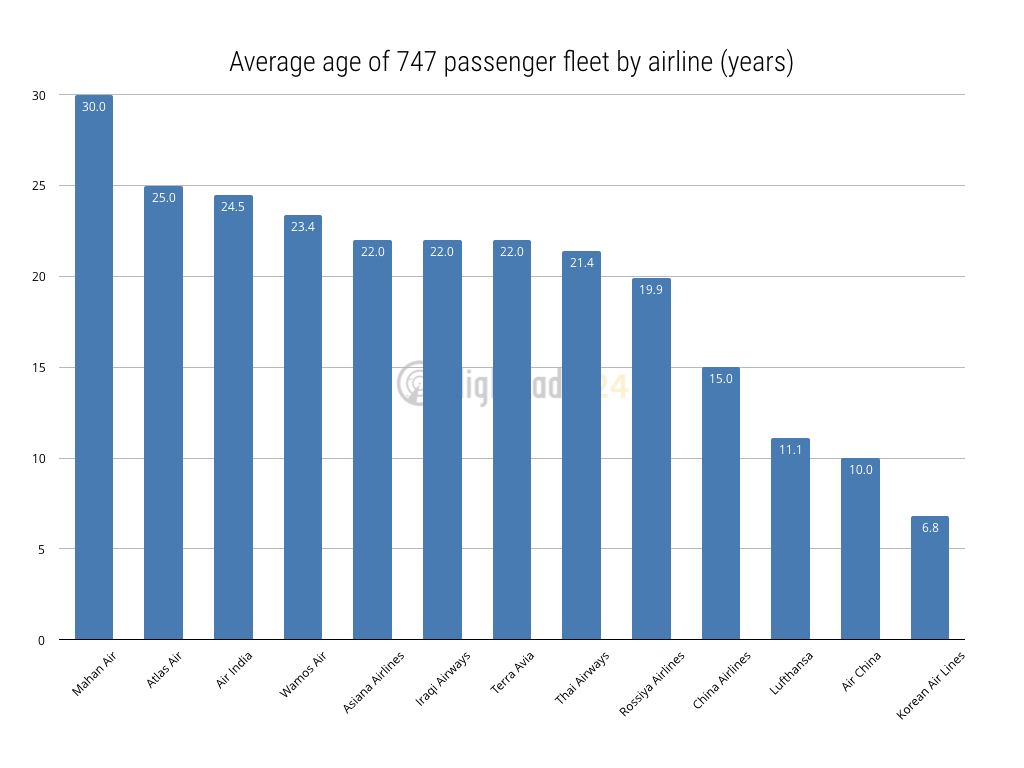 After the BA retirement, the majority of 747s – 28 airframes or 32% of all remaining passenger 747s to be precise – are flying for Lufthansa. 19 of those are the 747-8. Some of the latter remain fairly active. D-ABYU has been doing regular runs between Frankfurt and cities like Shanghai and Sao Paulo. D-ABYT on the other hand hasn’t flown since a Manila–Frankfurt mission on 28 March. Lufthansa’s entire fleet of -400s remain parked for now. Their fate will likely depend quite a lot on how long the aviation downturn lasts and how severe it is. However we can likely say with some confidence that Lufthansa will still be flying 747s in the years to come. 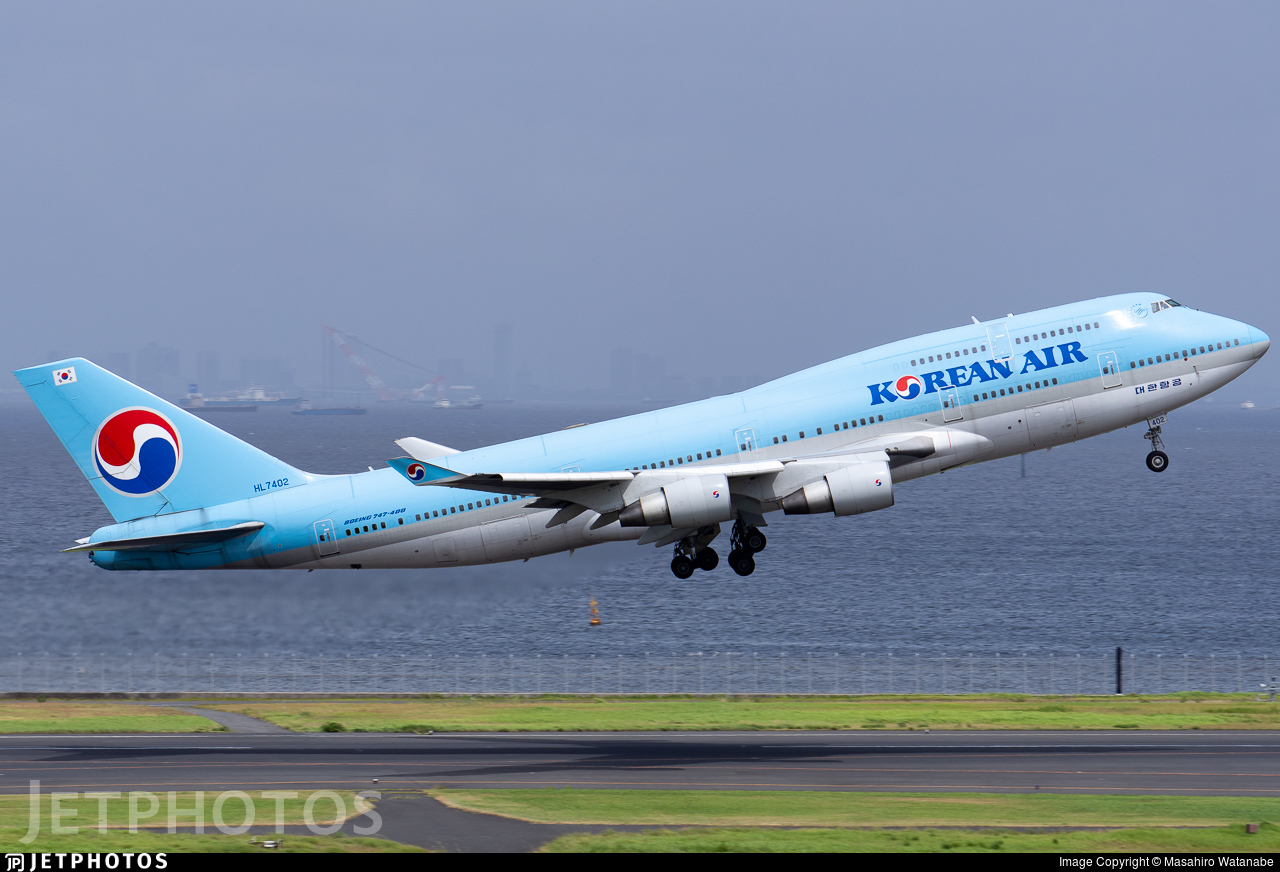 Korean Air is the next largest operator with 12

Korean Air is also a 747-8 operator. Less known is the fact that they still have two -400s in their fleet. Those have been parked since late February/early March at Gimpo airport. Even their 747-8 fleet has been all but completely dormant for the past four months. HL7632 did one roundtrip run to Budapest in May but otherwise hasn’t flown since 2 March. HL7643 flew a roundtrip each to Milan and Prague in April. And that’s about it. It’s not clear what Korean’s plans for their 747s are, but again with ten relatively new 747-8s, it’s likely they’ll be back. 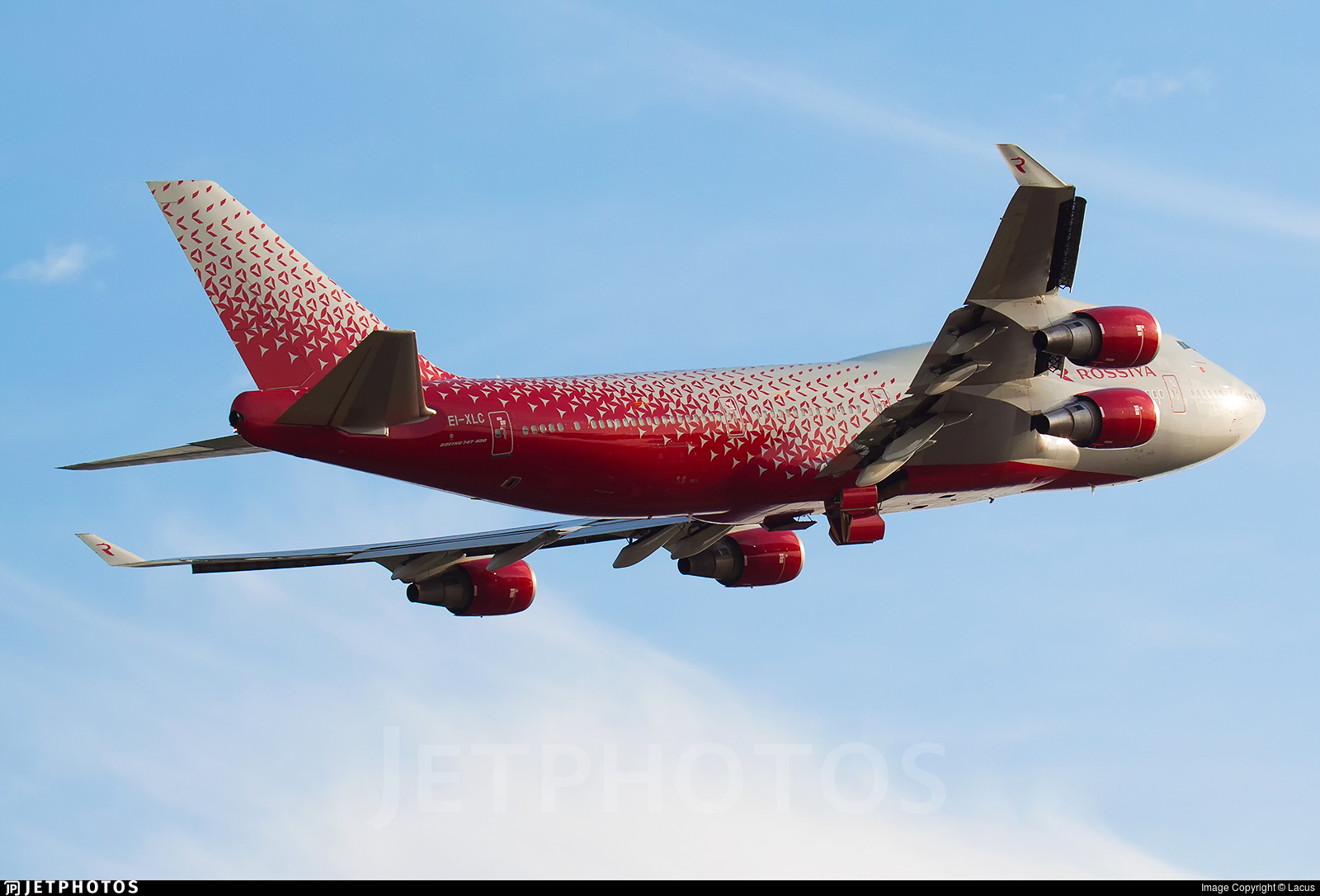 Rossiya is a surprise third place with nine -400s

Rossiya, a part of the Aeroflot Group with its headquarters in St. Petersburg, Russia, has a relatively large fleet of 747-400s, most of which have been busy flying domestic runs around Russia since late June. The lucky folks in Sochi, Khabarovsk, and Vladivostok are seeing quite a few of them. In June EI-XLF even did a roundtrip to and from Denpasar, Bali (DPS). If nothing else, the airline, which also has a number of 777, 737-800, A319 and A320 aircraft in its fleet, seems to be committed to its 747s for the time being. 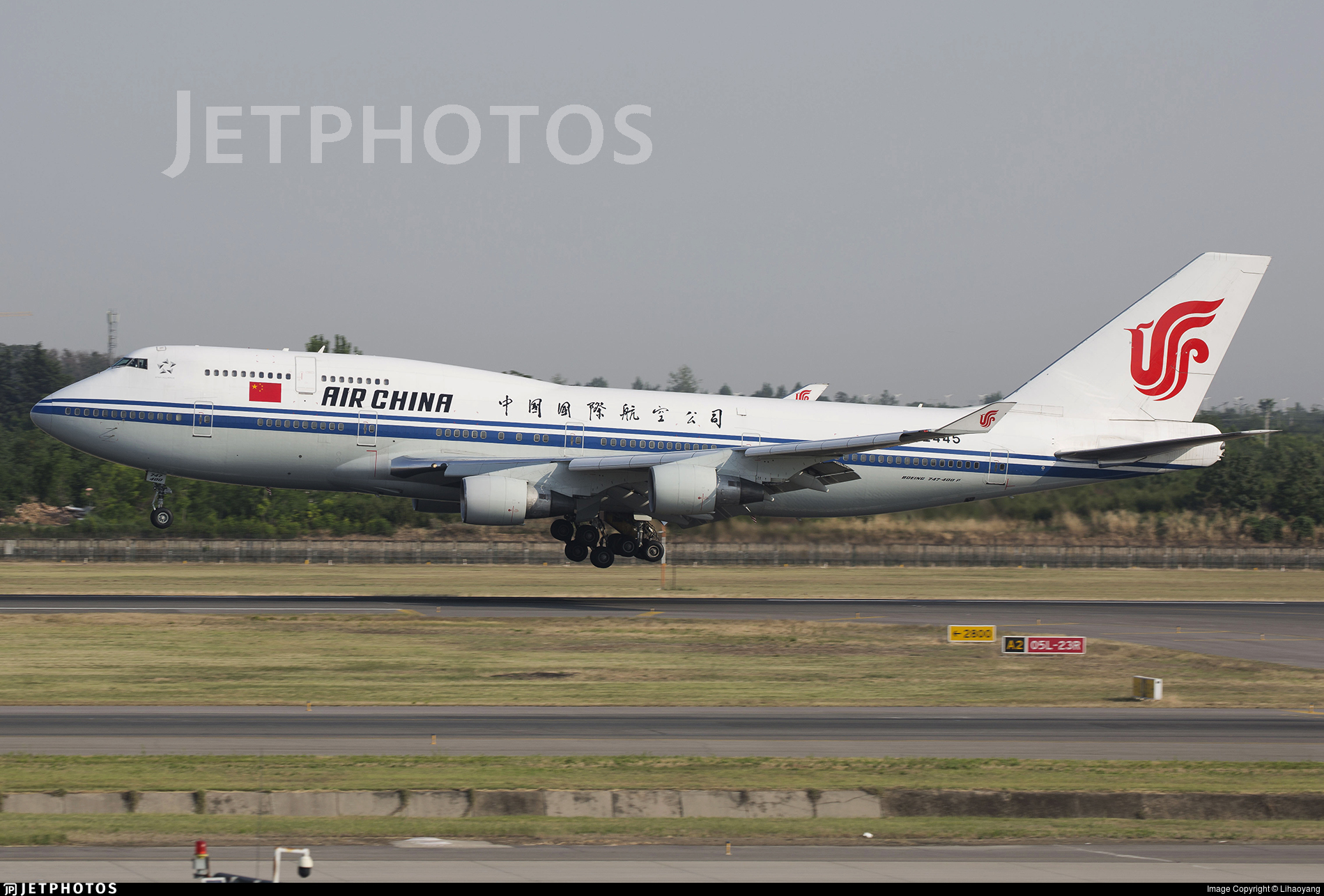 Air China is likely to keep theirs flying

Air China is the third and final airline to count the 747-8 as part of its passenger fleet, with six of the variety. With two -400s added to the mix it comes in tied for fourth overall with eight 747s in total. In fact those two 747-400s, B-2445 and B-2447 (26 and 25 years old respectively) have been pretty busy in recent months. They’ve done domestic runs and international flights to European cities like Madrid and London. The 747-8 fleet on the other hand has been parked more often, with sporadic duty to places like New York (JFK), and somewhat more regular, but still patchy service to Los Angeles (LAX).

There are 10 other airlines with active passenger 747s, and the future for many of these is less certain: