Flying with Air France during the pandemic 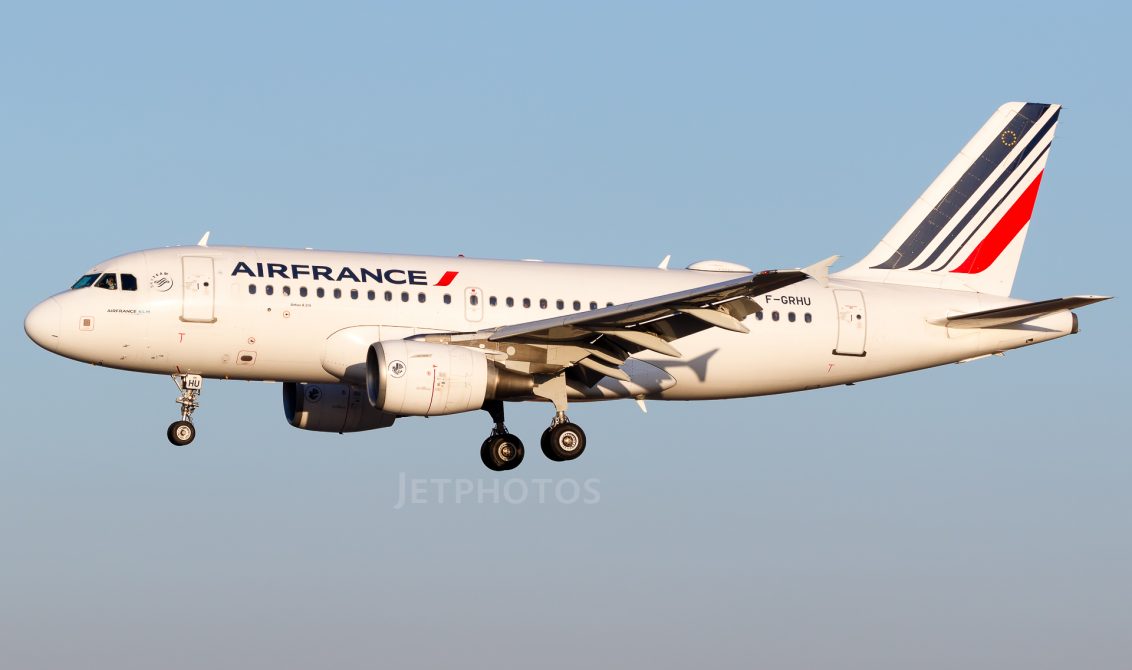 Note: the following is a review of a trip and includes the personal opinions of the author.

Despite gloomy news just about everywhere for commercial aviation, Europe has been something of a bright spot over the past couple of months. Traffic is still way down from its usual summer peaks, of course, but many airlines in Europe have nevertheless managed to add back a significant number of flights, and the demand seems to have been there to fill them – especially to summer holiday destinations and on low cost airlines.

No doubt it has helped that many places in Europe were hard-hit by COVID-19 early on and then managed to get things more or less under control before summer and keep it that way. There’s also the important factor that a number of destinations in Europe rely to a significant extent on summer tourism revenue to bolster their economies, so there was plenty of commercial pressure, and hence political will, to get planes flying again.

That resumption of flying has held up until now, with no apparent dip even as some places in Europe have seen new spikes in infection and others have reintroduced quarantines or lockdown orders of some sort. OAG data for the week ending August 3 has Western Europe as the world’s leader in percentage growth of seats offered, up 14.6% on the week prior.

Air France has been busy lately

Air France (AF), whose home city of Paris is reportedly the second most-visited tourist destination in the world, has been able to ramp up flying considerably since the very low lows of April. A lot of that has been intra-European flying. In fact flights on Air France A320 family aircraft, which mostly fly within Europe and to destinations in North Africa and some cities in the Middle East (plus a handful of legs in the Caribbean), are now almost back up to February’s pre-pandemic levels. Normally the summer flying schedule would be quite a bit busier than February, but it’s striking nevertheless. 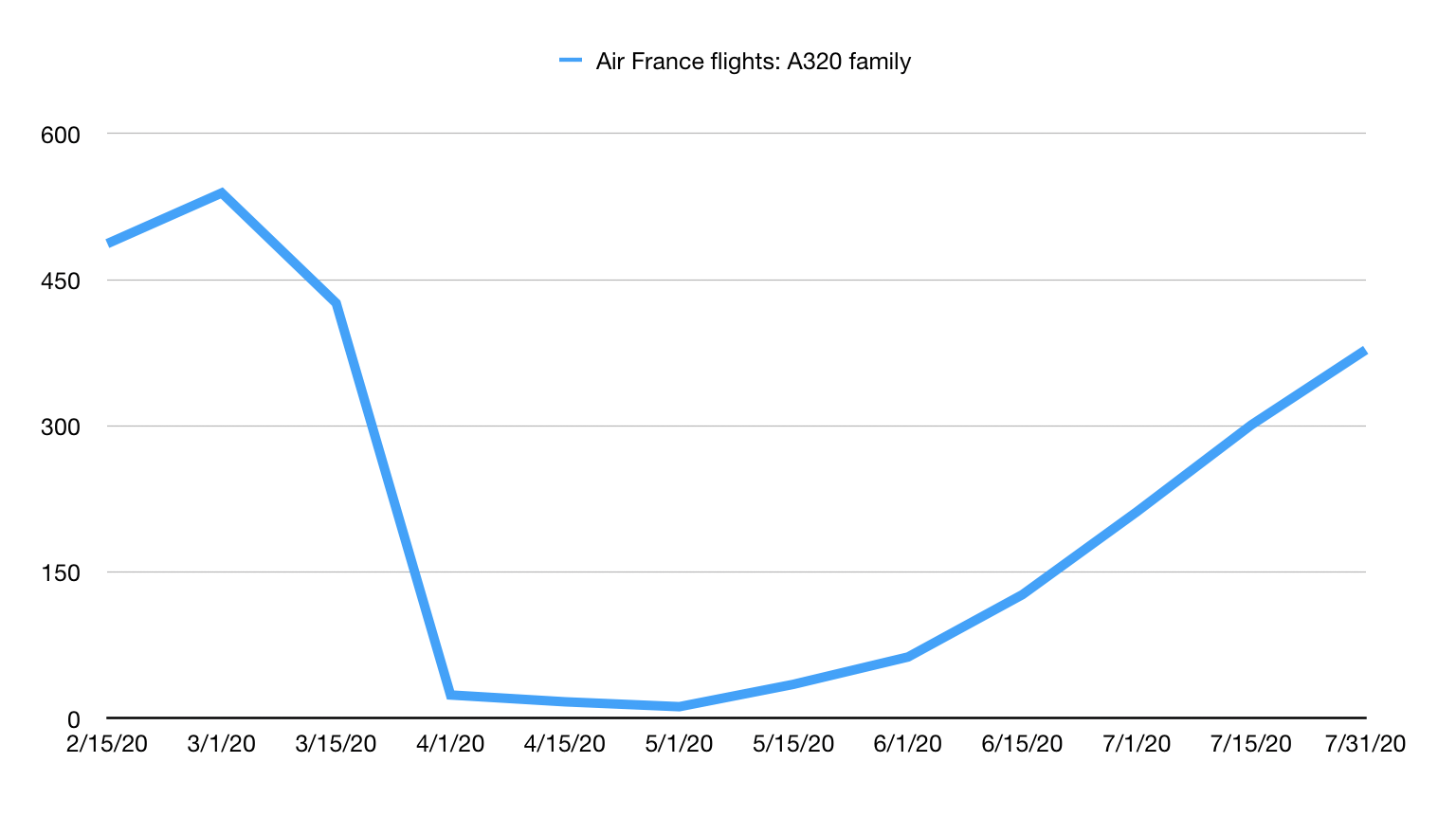 Looking at the data, it’s also interesting to see just how close to a complete shutdown Air France got in April, with just a handful of domestic flights operating. It’s also intriguing to see that while they kept one A318 flying during most of this time, they completely grounded the A319 fleet for around a month, despite its smaller size which normally would seem a good choice given relatively empty planes – no sense in flying more airplane than you have to. But the larger A320 picked up a bulk of the flying throughout the past five or six months, and the even larger A321 was also used on some flights almost the entire time. 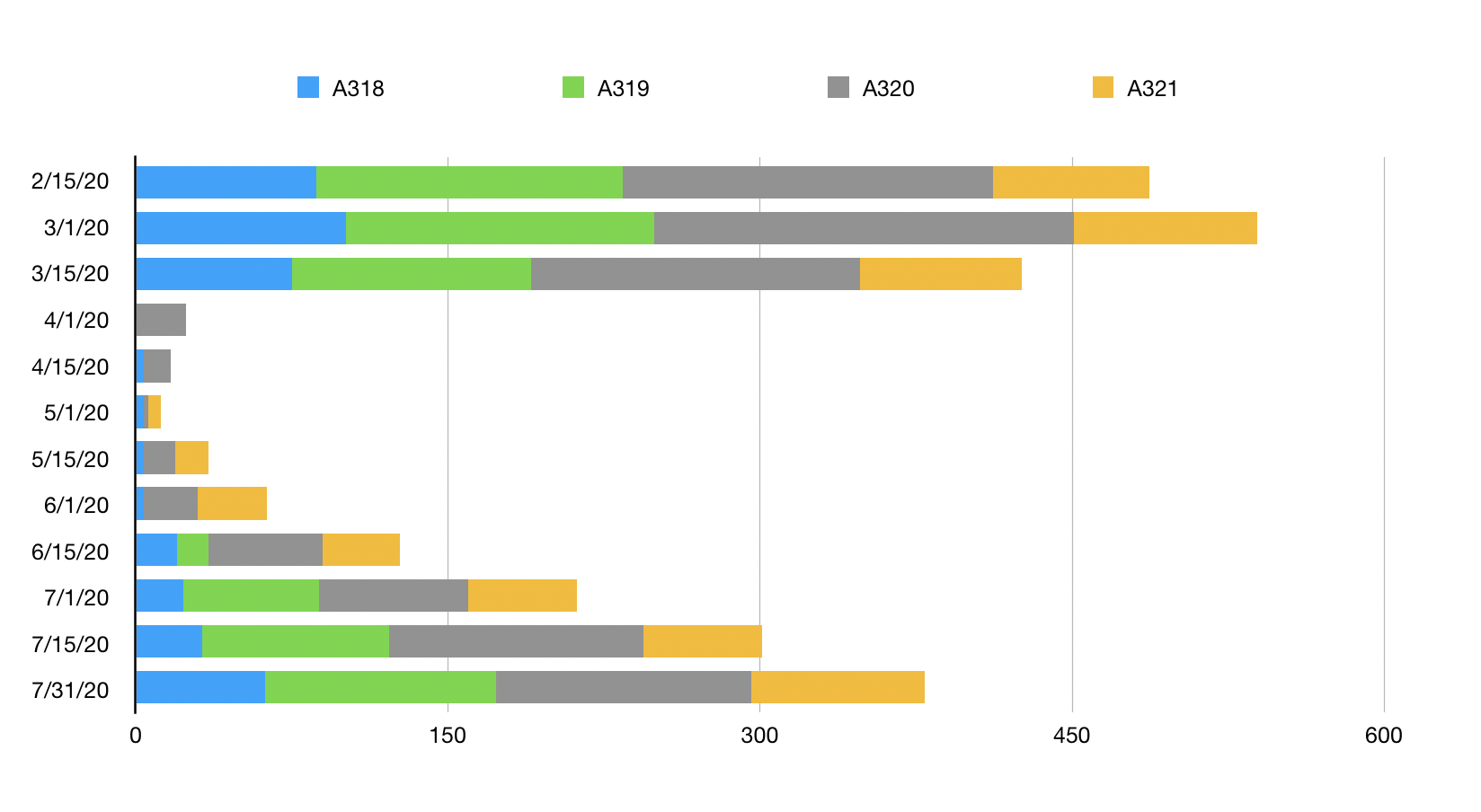 From Stockholm, where I’m based, Air France is currently the only option for getting to Paris nonstop. SAS, which normally runs a few daily flights, hasn’t yet restarted many of it’s routes between Arlanda (ARN) and continental Europe. So I thought it might be interesting to take a look at what it’s like to fly within Europe, in summer, in the time of COVID-19 – and to see what Air France’s particular take on pandemic service is like.

Normally I almost never fly Air France, so I can’t really compare the service to pre-COVID times. But I will say that I was pleasantly surprised. While SAS is offering no service whatsoever on European flights during this time (if the flight is long enough you get a bottle of water), Air France came around with plenty of French treats like multi-colored madeleines and, in a moment of excess, an apple cake as well. The drink service was the standard economy class offering and on the evening flight back even included alcohol. On top of this, and maybe most importantly, flight attendants were all smiles. Without exception they were friendly and welcoming. That makes a big difference in a time when many air travelers are even more anxious and stressed than usual.

I was a little bit surprised to see that both flights, to Paris and back in late July, were packed. AF1463, the outbound flight, was at almost 100% capacity. And the return flight, AF1462 a few days later, was probably 85 or 90% full. To be fair, Air France makes no claims that they will block seats. It was, however, surprising, having heard for so long about planes running near-empty and social distancing being fairly easy to accomplish on many of them. It seems that research shows airplanes are not a particularly dangerous place when it comes to catching the virus, but it nevertheless feels a lot more relaxed when there’s some space throughout the cabin. That’s in no small part thanks to the fact that everyone on board is less tense – whereas when packed together in row after row, everyone seems just a little quicker to irritation.

The other somewhat disappointing aspect was out of Air France’s control, and that was all the people pulling their masks part way down their faces whenever they thought they could get away with it. This just strikes me as completely idiotic. There is plenty of research to suggest that in a crowded setting, having everyone in a mask does significantly reduce transmission risk. Like everyone else I of course don’t enjoy wearing a mask for two hours, but is it really so difficult? No, it is not. And I much prefer being on a plane knowing everyone has one. In fact there was a flight attendant on the return flight dutifully attempting to police mask-wearing, but that was a futile effort.

One of the worst things about flying to Paris is having to use its airports, and Charles de Gaulle (CDG) is the worst of them. It is a bitterly frustrating thing that the Skyteam portions of Terminal 2 are such beautiful structures to look at, and yet serve their purpose as air terminals so poorly. When one of the Terminal 2F concourses gets even remotely full, it a) becomes unbearably hot, because it’s built as a greenhouse and has almost no air conditioning, and b) completely disallows any kind of physical distancing.

What’s more, the arrival procedure seemed to have caused confusion in both passengers and staff alike. We were told to fill out contact forms on the plane, but these were never collected. To get into France, we had to go through a passport check (normally unnecessary within the Schengen zone) and there were several transit passengers getting into heated arguments with airport staff because they’d been told to go to one queue only to be turned back after 20 minutes of waiting. During a pandemic these frustrating aspects become all the more intensely felt.

The biggest issue with the flights, though was that on the return leg it was very clear that no cleaning in particular had been done to our seats. Air France advertises “Air France Protect” as part of its service right now, and part of that involves promising thorough cleaning of the cabin between each flight. The captain even made an announcement outlining the “meticulous” cleaning that was being done onboard. And yet the window was covered in grease from someone’s head or hands, and the tray table still had a recent spill on it. As failure to deliver on a service promise goes, this one is pretty serious.

Can the recovery continue?

For a full recovery to happen in air travel, at least as long as the virus is around in some form, there is clearly much more that needs to be done so that the majority of passengers can feel confident and safe. Promised cleaning needs to happen every time, of course. But processes also need to become standardized, across Europe at least, and clearly explained to passengers and staff – whether its immigration checks on arrival or forms that need filling out. And passengers can’t feel as if the rules and procedures may change unexpectedly at any time, which they currently are with regularity.

And yet, it’s good to see air traffic in Europe rebounding relatively well despite all the uncertainty that still surrounds the coronavirus. And in spite of the negatives, it was pleasant and also reassuring to see that Air France is back to flying passengers, and managing to offer quite a good service while doing so.