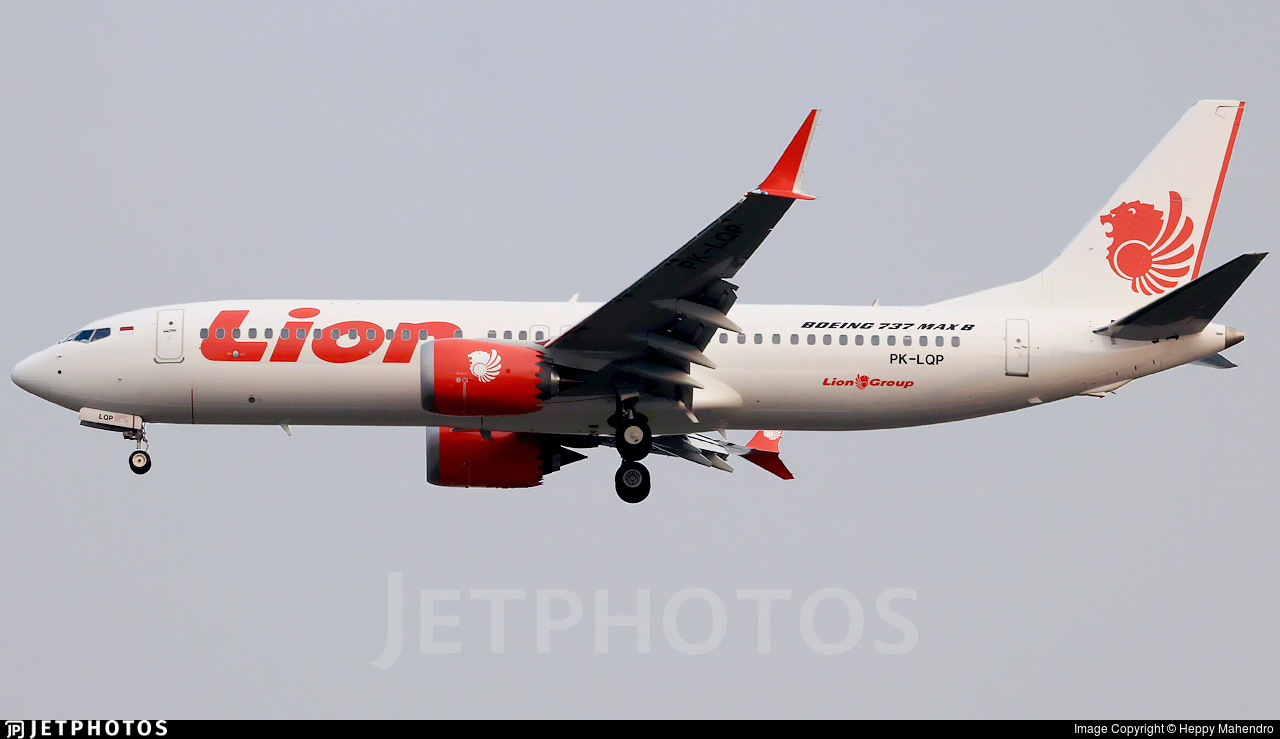 Lion Air flight JT610 departed Jakarta for Pangkal Pinang at 06:20 local time (23:20 UTC) on 29 October and lost contact shortly after departure. Flightradar24 received the last ADS-B message from the aircraft at 23:31:56 UTC at an altitude of 425 feet AMSL. The flight was operated by Boeing 737 MAX 8 registration PK-LQP. The aircraft was delivered to Lion Air on 13 August 2018, just over two months ago and entered service with the airline on 18 August. It is powered by two CFM LEAP-1B engines.

Indonesian officials recovered the Cockpit Voice recorder from Lion Air 610 on 14 January. This week they stated no details from the CVR would be made public until the final investigative report is released later this year, likely August or September.

Boeing has released a response to the preliminary report produced by the Indonesian investigators.

The Indonesian National Transportation Safety Committee has released its preliminary report regarding the crash of JT610. The report presents preliminary factual information regarding the JT610 as well as JT43, the flight that immediately preceded JT610. The report includes data from the Flight Data Recorder, but not the Cockpit Voice Recorder, which has yet to be recovered. As it is a preliminary report, it does not determine the cause of the crash.

For analysis of the report, you may wish to read articles here and here.

This emergency AD was prompted by analysis performed by the manufacturer showing that if an erroneously high single angle of attack (AOA) sensor input is received by the flight control system, there is a potential for repeated nose-down trim commands of the horizontal stabilizer. This condition, if not addressed, could cause the flight crew to have difficulty controlling the airplane, and lead to excessive nose-down attitude, significant altitude loss, and possible impact with terrain.

The aircraft departed Jakarta at 23:20 UTC. Last data was received from the aircraft 11 minutes later at 23:31 UTC.

Normal ADS-B data is processed at a 5 second interval for display on Flightradar24’s website and mobile apps. Granular data is stored as received in intervals much smaller than 5 seconds. We have downloaded the granular ADS-B data from receivers in the area and processed it. The full granular CSV file for the flight is included below for download. The first chart below shows the Calibrated altitude (feet, above mean sea level), Ground speed (knots), and derived Vertical speed (feet per minute) received as part of the ADS-B data from the aircraft for the entire flight. The second chart below shows the same graph, but only displays the data for the last minute of received data. Below are the basic CSV file for JT610 with standard update frequency, the KML file, and the granular data with increased signal frequency.

Commenting for Bloomberg, Lion Air spokesman Danang Mandala Prihantoro notes that pilots of JT43, the flight operated by PK-LQP immediately prior to JT610, reported an issues with sensors on the aircraft used to calculate airspeed. We have now downloaded and processed granular ADS-B data from JT43. Of specific interest are the data from the first approximately 11 minutes of flight.

The first graph below is based on granular data from the entire JT43 flight.

Below are the basic CSV file for JT43 with standard update frequency, the KML file, and the granular data with increased signal frequency.