On 11 November, Air Astana KC1388 an Embraer E190 (registration P4-KCJ), departed Alverca Airport following a heavy maintenance C-check at Oficinas Gerais de Material Aeronáutico. Shortly after departure the flight crew declared a Mayday stating they were dealing with a loss of control. After struggling with the aircraft for over 1 hour the crew was able to regain control and land at Beja Air Base on their third attempt.

Portuguese authorities published their preliminary report on the incident on 31 May, finding a reversal in the aileron cable assembly. You may read the full report here (PDF).

Portuguese authorities have released a preliminary serious incident notice detailing what is known so far. In the notice, authorities note that ‘the performed trajectories caused the aircraft and the persons on board to sustain intense G-forces, and causing the aircraft complete loss of control for some moments at multiple instances’. Also detailed are the pilots’ actions to eventually regain control of the aircraft and safely land.

Unfortunately, this aircraft is not equipped with ADS-B and was tracked using a different technology called Multilateration (MLAT). Flights tracked with MLAT do not broadcast their position like flights equipped with ADS-B, it must be calculated. MLAT tracking uses 4 or more Flightradar24 receivers to calculate an aircraft’s position, track, and speed. Using the time difference of arrival of the radio signals from the aircraft to different receivers, we are able to calculate the position of the aircraft. The change over time of that position allows us to further calculate the track and speed of the aircraft. Positional accuracy is near that of ADS-B, but speed calculations may suffer, especially when an aircraft is turning or circling.

What data is received from the aircraft?

Why can’t I see the whole flight?

Why are the lines not smooth?

The lines on Flightradar24 represent a direct connection between two consecutive received (ADS-B) or calculated (MLAT) positions and may not indicated the actual path flown by the aircraft. Because it takes 4 receivers to calculate a position for a flight, there may be gaps in the position coverage, which when connected by flight path lines makes the path appear ‘jagged’.

Why does it say the flight departed Lisbon (LIS)?

Route information information is not broadcast by the aircraft. For scheduled commercial flights, we match the call sign broadcast by the aircraft to a flight number and route. For non-scheduled flights or for flights that do not broadcast a calls sign, our systems makes a best guess for the departure airport, including location, heading, and previous history. Our system also prioritizes commercial airports as origins and destinations when making determinations. For aircraft that we are not able to track on the ground, this can result in errors where there are multiple nearby airports, such as with Air Astana departing from Alverca Airport.

Even if it isn’t possible to calculate a position, is data still received?

The aircraft is always sending data via its transponder, so even when it is not possible to calculate a position via MLAT, we record the data we do receive. In the case of KC1388, we received altitude reports from the flight through about 700 feet on approach to Beja Air Base, capturing altitude data for the 3 approaches made by the aircraft. This data is available for download above. 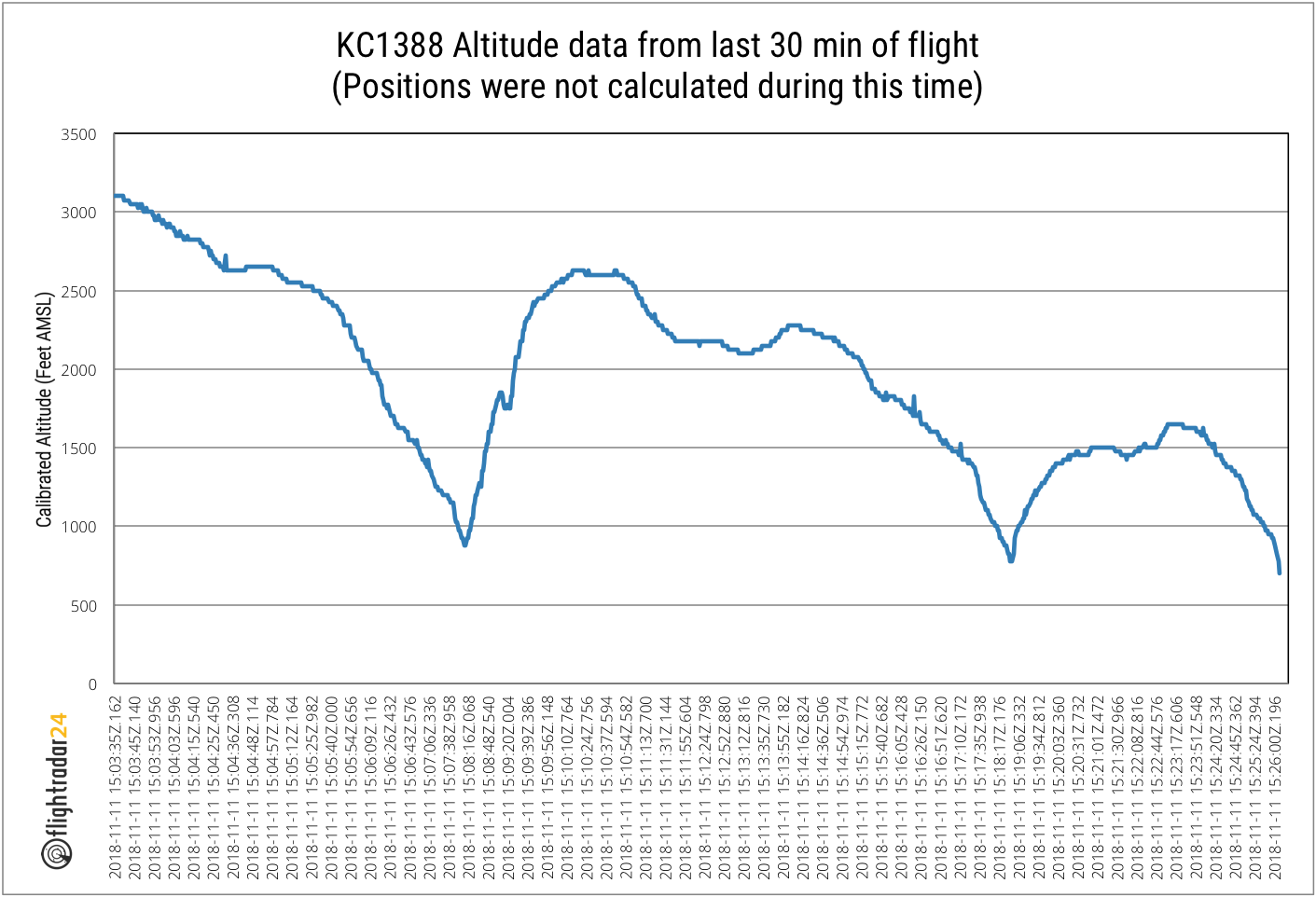 Video of KC1388 landing at Beja