While we continue to expand our receiver network and explore new ways to achieve our goal of global ADS-B coverage, there are still some areas where we lack ADS-B or MLAT coverage. When an aircraft exits our coverage area we continue displaying that aircraft using estimated positions. 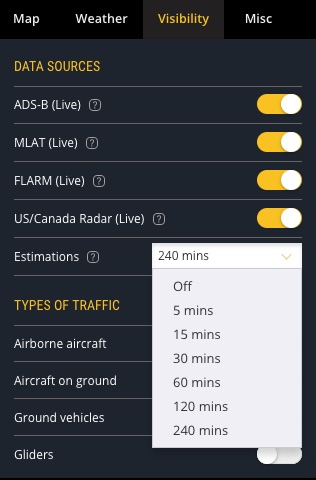 For flights without a known destination, we will display estimated positions for up to 10 minutes after a flight exits our coverage area. For flights where the route is known, we can estimate positions for up to 240 minutes. Estimated coverage may be turned on or off and the duration of estimations may be adjusted by users on the web. In our apps, estimations may turned on or off, but will always estimate up to 120 minutes. On the web, when estimations are enabled, users may select 5, 15, 30, 60, 120, 240 minutes of estimated positions.

Position estimates are based on the heading and speed of the aircraft when it exits our coverage area as well as the Great Circle route between the origin and destination airport and how close the flight is to its listed destination. Estimated positions generally pertain to aircraft traveling over large bodies of water on a constant track, so they can be quite accurate. When flights deviate around en route weather or otherwise adjust their track, our estimated positions can be incorrect. When a flight re-enters our coverage area ADS-B or MLAT positions are displayed.

When a flight exits and then re-enters coverage, such as the Japan Airlines flight pictured above, the area of estimated coverage will be displayed by dashed black lines. While a flight’s position is estimated it will remain visible as it had before coverage is lost. It is for this reason that MS804 appeared to continue towards Cairo when viewed with our /Global Playback function as we continued to estimate a position when the ADS-B signal was lost. We stop estimating coverage as a flight gets within 15 minutes of its destination so as to prevent flights from overflying their arrival airport.

We estimate positions for an average 100 to 500 aircraft depending on the time of day. That number, however, is falling as we increase our coverage areas over the oceans. Many flights, such as the 13,000 kilometer, 15 and a half hour, Emirates flight from Dubai to Houston below are fully covered as they cross the Atlantic Ocean. Flights traveling further south or over portions of the Pacific and Indian Oceans still have some estimated coverage.

If you’d like to help us increase our coverage area, you can apply to host a Flightradar24 ADS-B receiver or build your own receiver using a Raspberry Pi. Our receiver hosts and anyone sharing data with our network receive a free FR24 Business subscription.