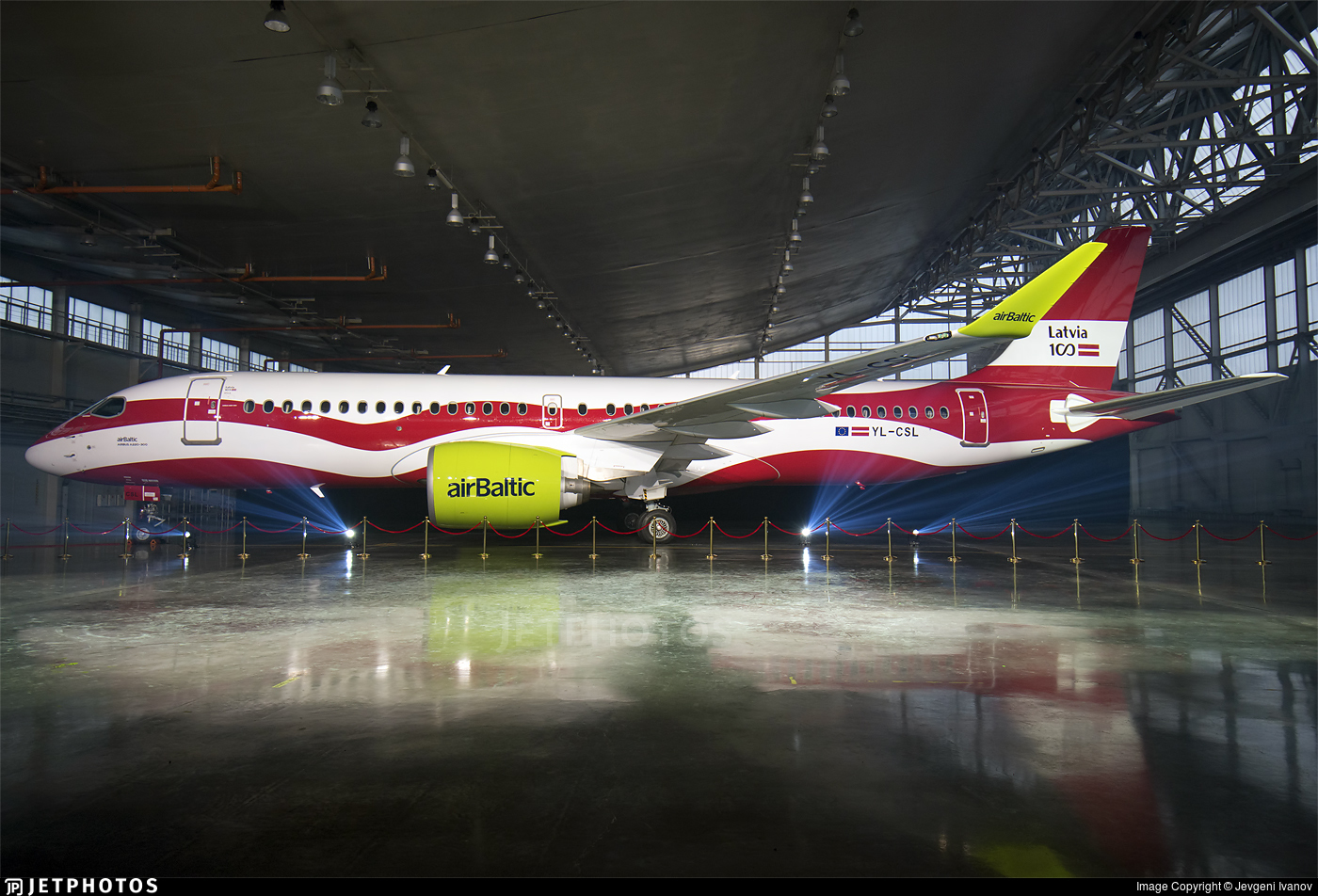 Diving deeper into the data: the past year at airBaltic

Last week we had a chat with Martin Gauss, the CEO of airBaltic – you can listen to it on the latest AvTalk podcast and/or read sections of the interview with additional context on the blog. Gauss spoke of a sudden cut in flights almost overnight, which brought along with it the retirement of two aircraft types in the fleet. He also described a modest recovery that was followed by continued declines – to the point that now, the Riga-based airline is maintaining only “essential connectivity” and waiting for demand to pick up again.

We thought it would be interesting to dive deeper into the Flightradar24 data for airBaltic during the past year. Just how badly did flights dip? Which cities have seen continuous service during the pandemic, if any? And what did the recovery really look like?

The data brings home the reality of what Martin Gauss described – that from one day to the next airBaltic stopped flying completely, due to Latvian government regulations as the pandemic picked up steam.  That lasted 62 days. What service we do see during the late March to late May grounding will have been special flights only – for example, repatriation flights. 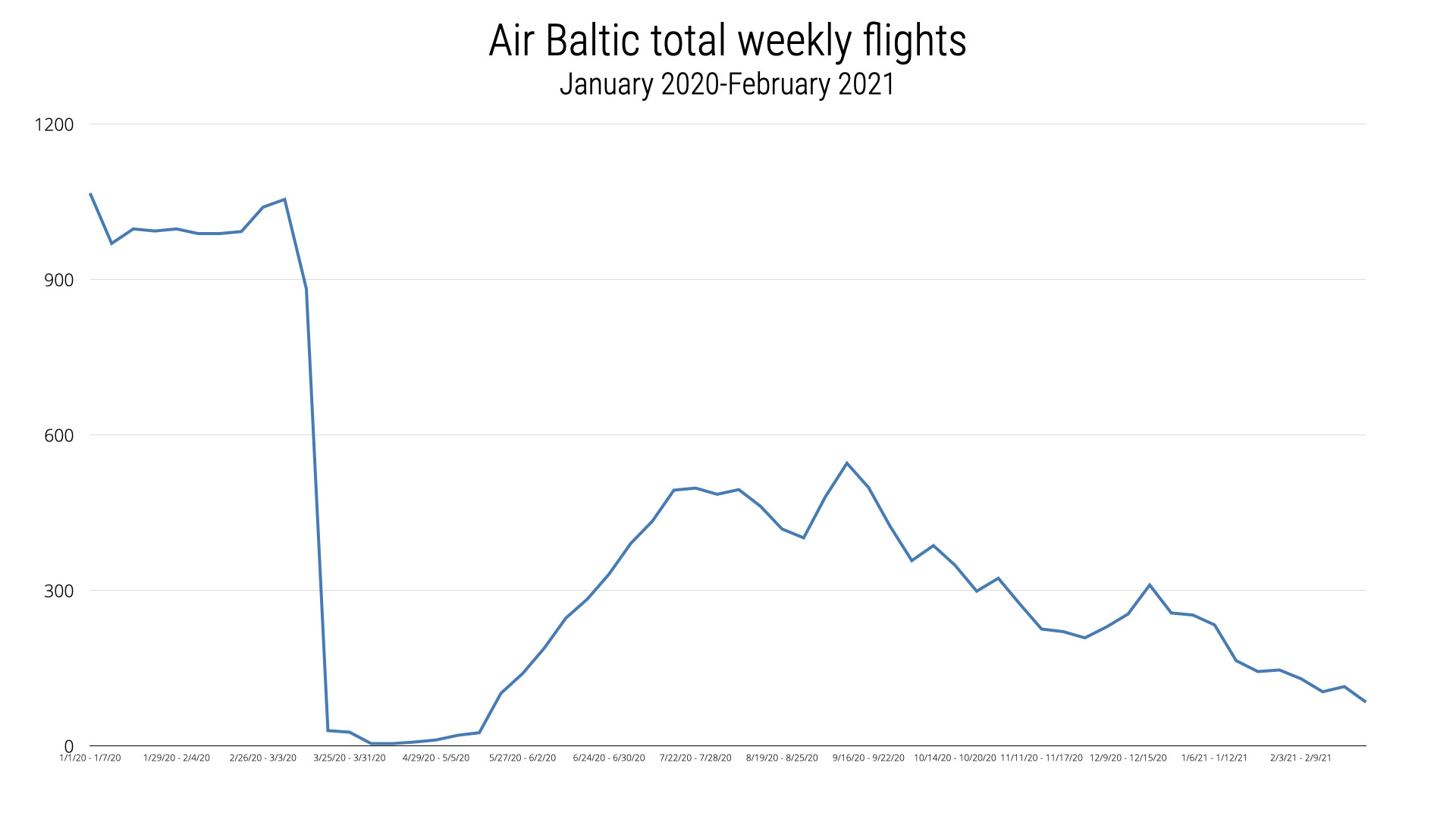 The other thing that jumps out is how suddenly the Dash-8 and 737 fleets found themselves retired in March. As we covered in last week’s post, their retirement was already planned – just not for a few years yet. The shift to an A220-only fleet happened overnight. Mr. Gauss pointed out what a great decision that’s proved to be. He said that if they had known how well it would work to simplify the fleet, they likely would have done so earlier, pandemic or not. 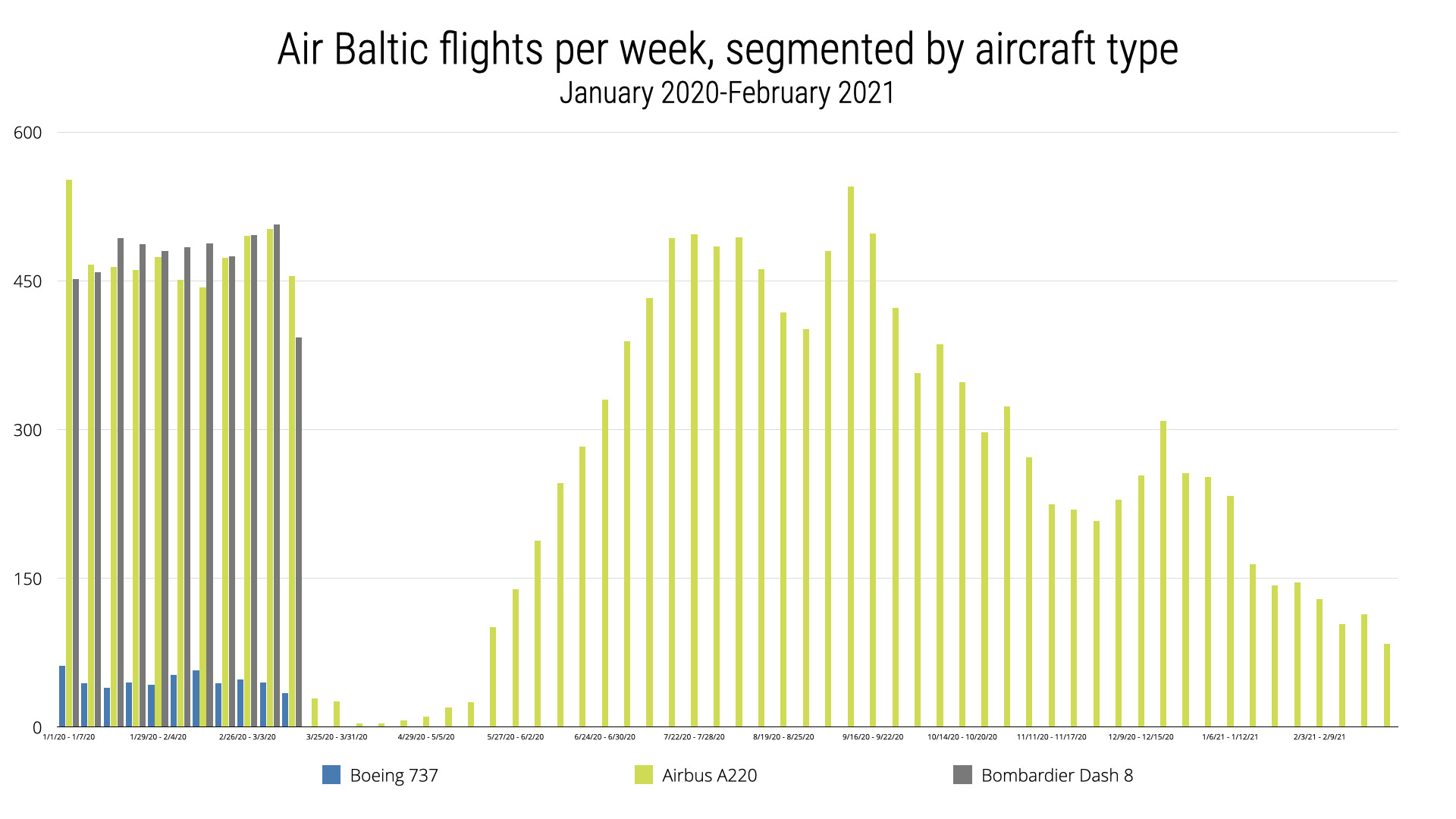 Listen to expert aviation analysis in our latest podcast

It’s always interesting to see which cities are a priority for an airline amid significantly reduced operations. Naturally the top three cities for airBaltic since the beginning of 2020 are Riga, Tallinn and Vilnius. For an airline with “Baltic” in its name, this makes sense. And despite the fact that the main hub and headquarters are in Riga, airBaltic had been busy building up smaller bases at the other Baltic capitals in recent years – a process the airline intends to resume once demand picks up again. But what about the rest of the network?

Every city in the airBaltic network lost service at some point, but certain cities clearly saw more flights over the past 15 months than others. 23 other cities saw 100 or more total airBaltic flights in that time. The nearby Nordic neighbors are clear winners here – Oslo (648 flights), Helsinki (638), Copenhagen (605) and Stockholm (575). In normal times airBaltic does a good business funneling connecting passengers from and to these cities via Riga, and no doubt will soon again.

And yet, one city beat out all the Nordics, and by quite a margin too. Aside from the Baltic capitals, this is the number one winner: Amsterdam. Even in the last week of March 2021, when traffic was at very low levels overall, Amsterdam saw 8 flights while Oslo saw 5, Helsinki saw zero, and Copenhagen and Stockholm had 1 and 2 respectively.

Listen to expert aviation analysis in our latest podcast 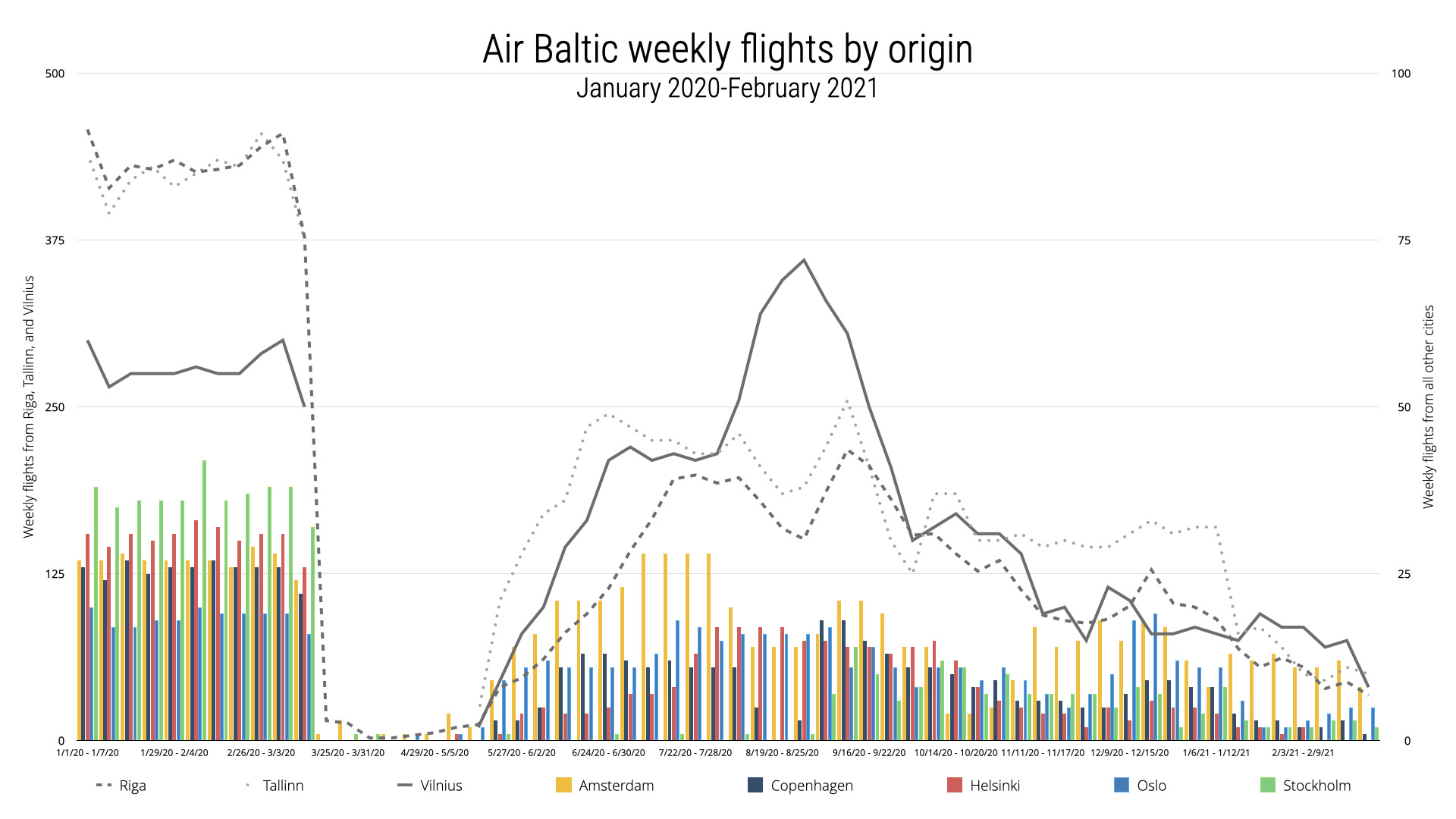 Another interesting piece of the data is the Russian flights. These are normally an important part of the airBaltic network. Moscow saw around 4 flights a day prior to the pandemic. St Petersburg had around three a day. Of course Russia stopped almost all international flights going in and out once the pandemic hit, and has only been gradually relaxing that lately. As of the end of March there were still no airBaltic flights to Russia operating. 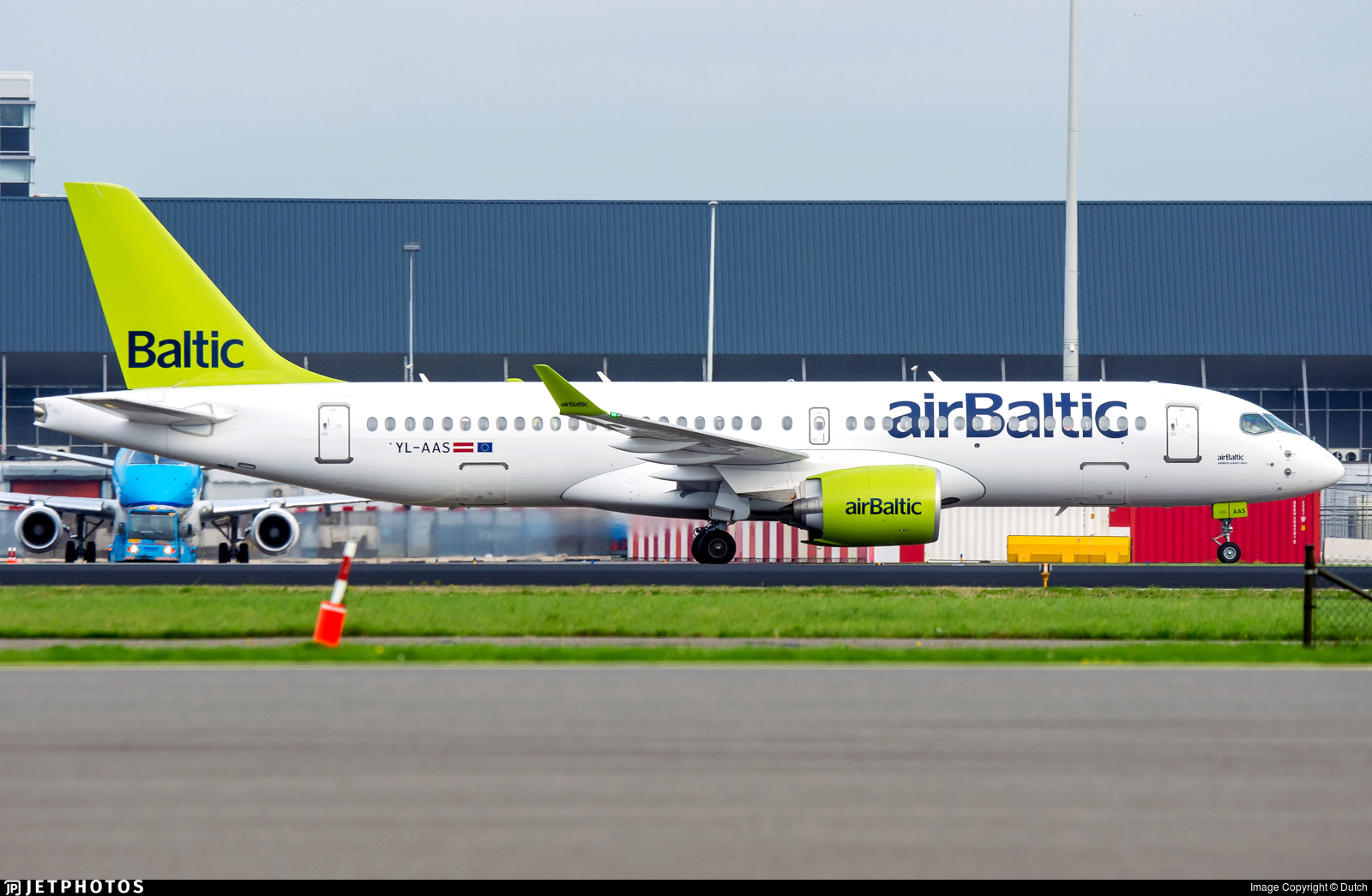 A small recovery, but continued declines ever since

Overall the data gives us a fairly negative picture. While summer 2020 saw a nice boost to traffic it’s been a relatively steady decline ever since. By the end of March this year flights were at some of their lowest levels since the stoppage a year ago.

All hope is not lost, however – and if you listen to our interview with Martin Gauss you’ll hear that he is optimistic about the coming travel boom. As he put it, airBaltic may soon “have a luxury problem.” With only 145 seats per plane, Gauss said, “we will have the issue then of, do we have enough aircraft?”