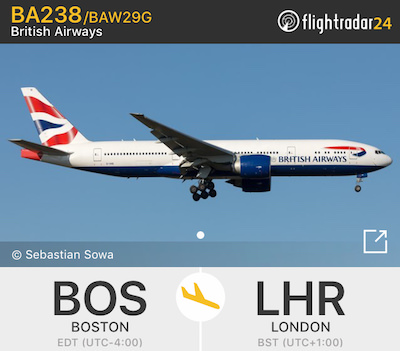 Call signs are used by flight crews and air traffic control to identify individual flights on the controller’s screen and over the radio. A call sign may or may not match the flight number and some airlines have radio call signs that differ from the airline’s name. For example, British Airways flight 238 between Boston and London would display the commercial flight number BA238 on passengers’ boarding cards, airport signage, and in flight announcements. To the air traffic controllers it appears as BAW29G and when the controllers and pilots communicate via radio, you would hear ‘Speedbird Two Niner Golf ’ on the radio, as Speedbird is the radio call sign for British Airways. The commercial flight number, which most people commonly associate with a flight, includes the airline’s two digit IATA identifier and the airline-assigned flight number. The full call sign includes the airline’s three digit ICAO identifier and the airline-assigned numeric or alphanumeric digits.

Why not make them the same?

For a long time, a flight’s commercial flight number and call sign were the same apart from the initial IATA/ICAO identifier. As the number of flights worldwide increased and as more flights were in close proximity to each other, airlines and air navigation service providers (ANSP) looked for ways to reduce call sign similarity (CSS) that leads to call sign confusion and possible safety issues. Call sign similarity can occur when two flights are operating in the same airspace on the same radio frequency with call signs that look or sound similar to each other or to a commonly stated phrase on that radio frequency, such as a runway assignment. For example, Air France 1531 and Ryanair 1531 might be climbing out of Paris airspace at the same time and mistake instructions meant for the other flight as their own. Beyond identical call signs, other factors contribute to CSS, such as anagrams (1531 vs 1351); similar end pairs (2124 vs 3124); digit repetition (555, 1117, etc); common information elements like runway names, flight levels, altimeter values, and many more.

First flight to use alphanumeric call sign operates in Australia

To arrive at alphanumeric call signs, certain airlines append a character to the flight number, so Virgin Atlantic flight 1 would become VIR1F (Virgin One Foxtrot over the radio). Others remove numeric characters and then add a letter, for example Aer Lingus flight 174 becomes EIN17A (or Shamrock One Seven Alfa over the radio).

In the British Airways example above, the flight was just assigned a call sign that would be sure not to conflict with other flights. In limited circumstances, airlines will replace the flight number with a separate all-numeric call sign, like KLM in the case of this Amsterdam-San Francisco flight 605, which used the call sign KLM281. Some airlines maintain the same call sign for a particular flight number, while others change on a daily basis.

How does this affect Flightradar24?

The ADS-B message emitted by the aircraft only includes the call sign for the flight, not route or commercial flight number. We acquire flight schedules data from third-party schedule providers and then match call signs to flight numbers using proprietary databases and machine learning. When call signs change during the seasonal schedule updates (or sometimes on a daily basis for some airlines), depending on the airline and geographical area, it may take 1 or 2 flights to rematch the call signs to flight numbers. Alphanumeric call signs have made processing flight data slightly more difficult for us, but the safety gains are more than worth the work.