AvTalk Episode 112: They walked away from a mid-air collision

On this episode of AvTalk, a Metroliner and SR22 collide over Denver and everyone walks away safely. A Boutique Air flight loses a door. And Boeing fixes the latest issue with the 737 MAX.

A Cirrus SR22 and Key Lime Air Swearingen Metroliner collided near Denver’s Centennial Airport last week. Everyone walked away safely. We cover what we know so far.

A Boutique Air flight from Minneapolis to Ironwood didn’t get very far last week. On the departure roll on the runway, the aircraft’s cargo door opened.

Boeing has developed a fix for the potential electrical grounding issue on some 737 MAX aircraft. Some airlines have already repaired theirs and put them back into service, while Boeing has begun delivering the aircraft once again.

Which airlines are on the move, and which are still grounded?

JetBlue is finally, actually flying to London with tickets going on sale this week from New York to both Heathrow and Gatwick airports. PLAY airlines, founded by a group of former WOW executives, is set to launch next month from Iceland. And Porter Airlines, which has been been grounded since last year due to the pandemic border restrictions between the US and Canada, has extended its suspension of service through at least July.

Air New Zealand’s special Koru Care flight was this week and 50 kids with disabilities or terminal illnesses got the flight of a lifetime.

Is Alaska, is not Alaska?

Ian takes issue with the phrase “Proudly all Boeing” and invites you to set him straight.

We’re moving to a weekly format! You’ll hear Ian and Jason twice as often beginning next week. The show format will stay similar, but we’ll likely keep the episodes a bit shorter. Have suggestions for future shows? Let us know by leaving us a review on iTunes. Reviews on iTunes not only help us make a better show, they help more people find the podcast! Want to send us additional feedback, just email us. 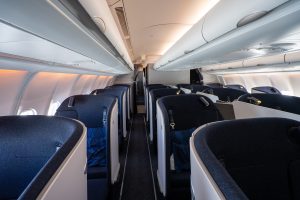