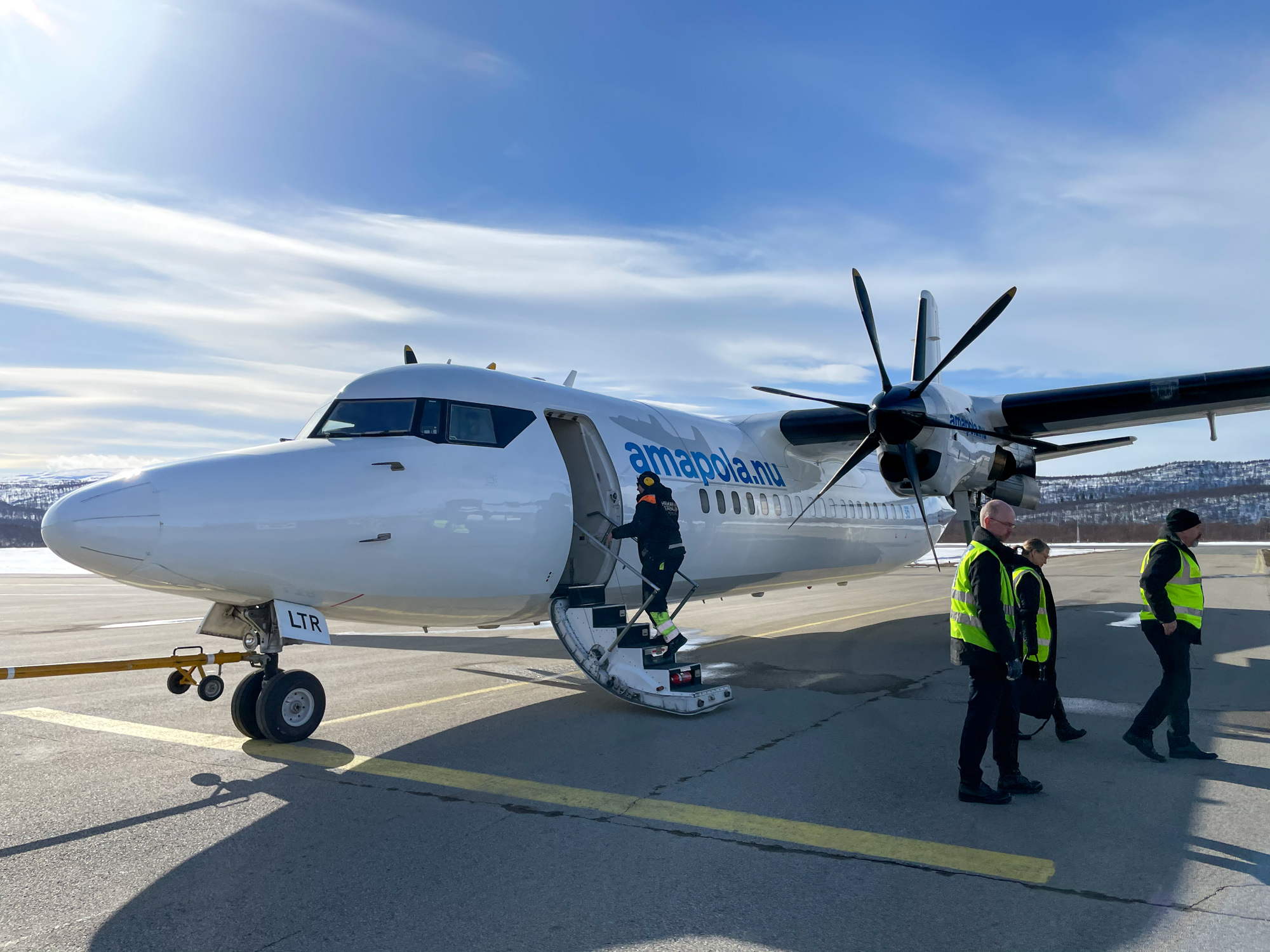 If you’re following us on Instagram (and if you’re not, please do!) you’ll know that last week I took a trip up to Hemavan (HMV) and back to Stockholm (ARN) on the Fokker 50. Those of you who know your turboprops will know the Fokker 50 is a very special bird indeed, so this was an exciting trip for an avgeek.

The airline operating these Fokkers is called Amapola Flyg. It’s a small Swedish airline, part of a family business, that started out carrying the mail and has since branched out into passenger flights as well, mostly to small communities in Sweden. It specializes in PSO routes – government-subsidized links to remote communities. Just last week the airline won a contract to serve a Finnish route as well – Helsinki to Joensuu, a small town near the Russian border.

A Fokker 50 to the far north

Hemavan is up in the north of Sweden not far from Norway. There’s a small ski resort or two up there and not much else. The airstrip doesn’t see a lot of action aside from Amapola flights. While all the snow had already melted down in Stockholm – things up there were still very wintry. We got lucky with sunny weather – it had been snowing daily in the run-up.

I recently interviewed Amapola’s CEO Erik Salén in order to find out a little more about this unusual airline. It’s all the more unusual because if you ask around even in Sweden, most people haven’t really heard of it. The entire interview can be heard on the latest edition of the AvTalk podcast.

I later visited the Fokker 50 maintenance facility at Malmö’s Sturup airport (MMX). There’s a lot more to come from all this, including a handful of videos, but for now here are a few of the things I’ve learned about Amapola so far.

“Amapola is more Fokker 50 than it is an airline”

Erik Salén told me that he considers Amapola to be more a Fokker 50 company than an airline. The aircraft is central to what they do, and not only because it’s very well-suited to the missions they fly.

“We own these Fokker 50s that we fly,” said Salén. “We sell spare parts. We sell maintenance services. We own one of the few remaining Fokker 50 simulators that we sell time in. And we sell aircraft and we buy some aircraft. And we try to make money out of the asset rather than dreaming of making substantial amounts of money on the airline services.”

The Fokker 50 is the business model, he says – not only because it’s relatively cheap to operate but also because they are all paid off – which makes it possible to serve communities that only need relatively infrequent service. If these planes have a relatively high amount of downtime between flights, that’s okay.

“They are well-depreciated and our capital costs are low,” said Salén, pointing to the importance of that in a country like Sweden which is sparsely populated but spread out, meaning there isn’t a need for round the clock service but there is a need for flights. “You don’t fly very much during the day. You take the American majors, they start with their regionals at 5am and stop at 1am the next morning – 18, 20 hours a day. In Sweden it’s quite often that you go in and out in the morning and in and out in the evening. And then capital cost is an important factor.”

The pilots on this flight, who graciously gave me the jump seat so that I could see what it was like to fly the plane, mostly wanted to talk about how much they loved the Fokker 50. Both of them had been flying it for years, and couldn’t imagine what they would do once it reached the end of its life.

As many will know, Fokker no longer makes planes. Amapola’s birds are mostly over 30 years old. Fokker has committed to supporting the remaining fleet until 2030 – so it’s likely that after that point, we’ll start to see the beginning of the end for this plane. But in terms of flight cycles, it still has plenty of life left in it.

And the pilots said it was remarkably modern for its age, even as it’s quite a simple plane that’s easy to fix up and get back in the air. Tomas, the first officer, said it’s very jet-like in the sense that there’s no need to fine-tune the propeller RPMs manually. Different flight modes are selected by the push of a button and all that is handled automatically. The instrument panels are designed to present only essential information, keeping pilot workload reasonable.

At the same time, it is a rugged and robust plane that’s a joy to hand-fly, they told me. It can handle all kinds of weather, short runways and rough landings. It can carry plenty of cargo and a lot of fuel as well. Tomas’s longest segment on the plane was a trip to Kosovo, which took around 6 hours. But it’s happiest, according to them, on little hour to hour-and-a-half hops like this one.

Salén pointed out that sentimentality aside, there really isn’t much out there that can replace the Fokker 50 – in this size category and with this capability.

“You have the paradox that there has basically been no aircraft manufactured after the early 90s in the 50 seat and below range,” said Salén. “Now you have a large fleet of aging aircraft, and nothing to replace them with. And that’s of course why there still is a market for the Fokker 50. It ages well.”

There is a new crop of electric aircraft in development that may hold some promise, though most will be smaller, at least to begin with. So what will fit into this niche in the future – or if anything will at all – remains to be seen.

Amapola serves mostly small communities that would otherwise lack air service. Amapola’s leadership seems happy to stick to doing that and doing it well. During the pandemic the airline bid for new contracts to maintain air links to larger cities in Sweden and won some of those, so it had a larger role to play in domestic aviation for a time. Now it’s operating somewhat fewer flights during the peaks of 2020. For more on that, head to this post from last year which looked at the data around the increased role Amapola had to play in Swedish domestic flying.

For his part, Salén is clearly not rushing to expand unless there’s a clear advantage to doing so. “We will only go into another segment if we think that it’s sparsely populated for us to have a niche worth the name. Because if you’re in the market where everybody else is, it’s absolutely impossible to make money.”

Enjoy it while it lasts

I have to say that from the jump seat this did indeed seem like a lovely aircraft to fly. It’s sad to think its days are numbered, even if it still has some years left. And the existence of this quirky little airline that no one has heard of is a kind of improbable one-off that, in the words of Erik Salén, probably can’t ever be recreated.

“You wouldn’t be able to recreate an Amapola if it hadn’t already existed,” said Salén. “Because we have all this knowledge and know-how about the aircraft with the people that we have. If Amapola would have gone away and you tried to do a Fokker 50 airline you would not find that know-how again. So with the Fokker 50 we’ll just enjoy it while it lasts.”

Stay tuned for much more from us on the Fokker 50 and Amapola Flyg.