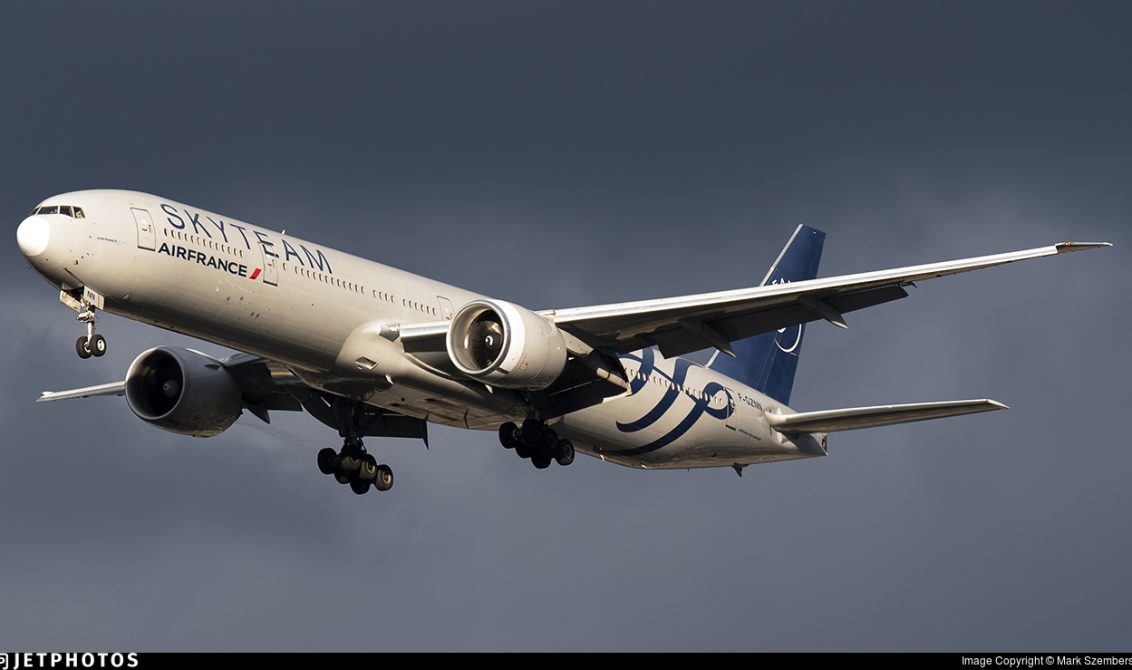 Air France across the Atlantic: a look at the data

After taking a long-haul flight with Air France from San Francisco that was stuffed full of cargo and had 100 seats occupied (read all about it here), I wondered what the French carrier’s transatlantic network has looked like over the course of the last year. Anecdotally I knew the airline has kept fairly busy during the pandemic, maintaining passenger service to a number of cities and running a pretty robust cargo operation too. But in absolute terms it has flown far fewer flights than normal. That’s true even on transatlantic which is an important part of its business. North America is a very big market for Air France – plus there’s also flights to French territories in the Caribbean and other Central and South American services.

But what does the Flightradar24 data say about Air France across the Atlantic? Let’s dig in to the numbers a little.

As with many airlines, April and May 2020 marked the low point for total weekly flights at Air France. It wasn’t until June that the airline broke past 100 transatlantic passenger flights per week. At that time the cargo operation was quite active already, in part because Air France already had a dedicated cargo fleet and network. In April and May last year there were between 75 and 97 flights per week, and around one-third of those were exclusively cargo. 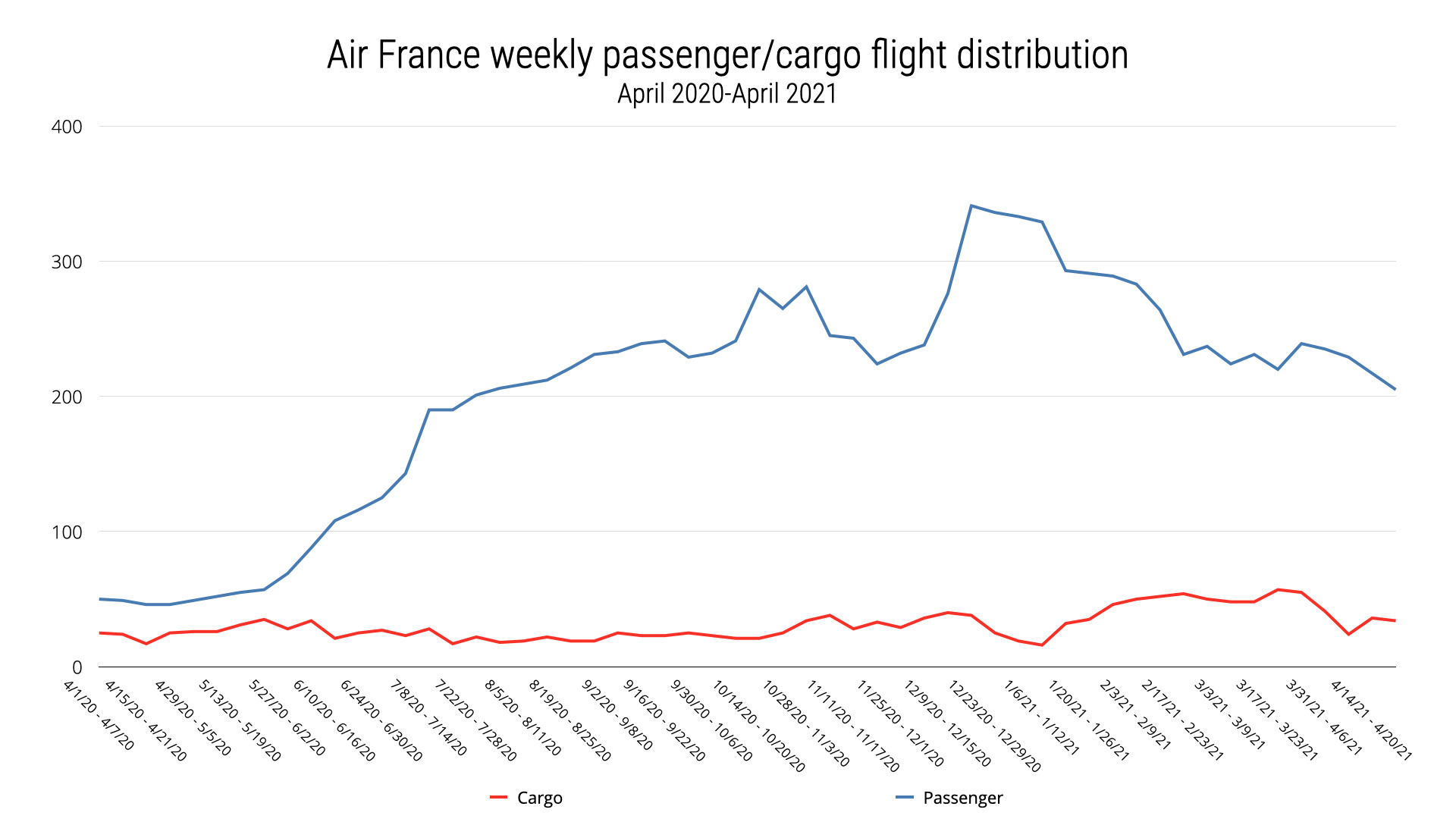 One interesting piece of the data is that the number of weekly flights grew somewhat in summer last year (as one would expect) but then continued to grow until around December. It then dipped slightly in January and February but not much – despite the hit that overall air traffic took at that time because of concerns around variants of the virus, et cetera. Weekly flights were regularly in the 300+ range during that whole time. It was only in March and April, interestingly enough, that things dipped back into the 200s, and by late April the weekly total was 239, the lowest since August of last year.

So which cities were most important in the Air France transatlantic network over the past 12 months? Some of the top few are actually surprising. New York leads the way with 1359 flights – and that’s no surprise. But number two is Pointe-à-Pitre (PTP) in Guadeloupe, a French overseas territory, with 1022. I didn’t expect that it would be quite so high. Moving down the list are Chicago (ORD) at number three, Montreal (YUL) at number four, and Fort-de-France (FDF) in Martinique – another Caribbean territory – placing fifth. Here’s the full top 10. 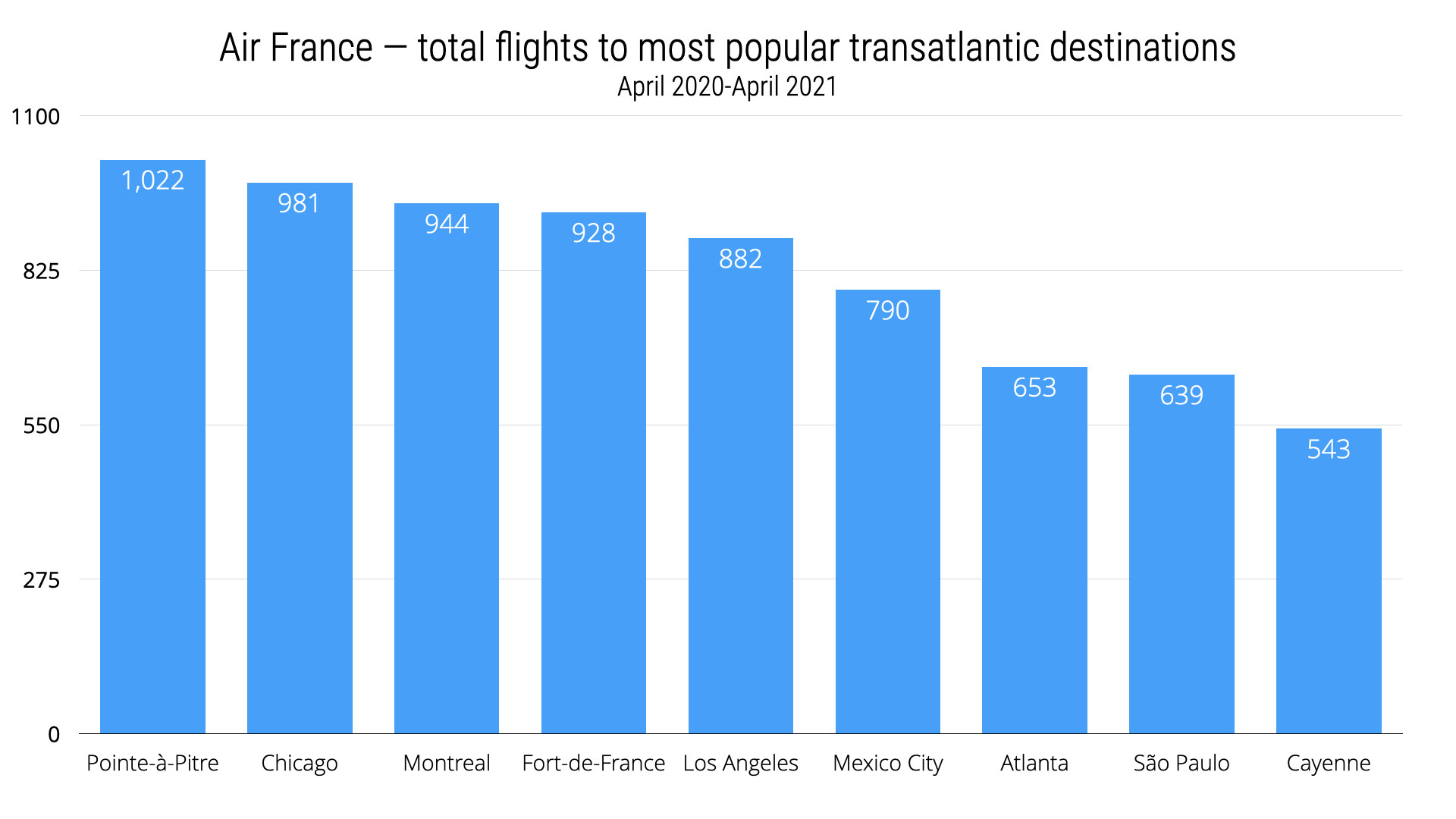 San Francisco’s total flights were low, at just 219 in either direction for the year.

Air France has quite a few wide-body aircraft in its fleet including most of the types currently offered by both Airbus and Boeing. But the 777-300ER stands out as a go-to airplane on transatlantic routes. In fact it accounted for over half the total flights since April 2020: 7,026 flights out of a total of 13,267 (and that total includes the cargo 777-200F fleet).

What will happen next?

For the moment we’re seeing a downtrend in total transatlantic flights, but it would be reasonable to expect that to turn around soon. Europe is looking to open up in the coming weeks, and many newly-vaccinated Americans are itching to travel in particular. France has said it plans to allow vaccinated travelers into the country this summer with less restrictions and impediments. Assuming virus figures continue to trend lower in Europe and North America, I’d expect to see these numbers go up, and maybe sharply. We’ll see.

In the meantime, if all this has given you an urge to fly Air France but your next trip isn’t for a while yet, here’s the latest update to Air France’s safety video.