A look at Air Greenland’s operations through the pandemic

Air Greenland is one of the world’s more intriguing airlines, and not only because of its distinctive red color scheme. Partly it may have to do with the fact that your average person rarely sees an Air Greenland plane. That’s because it’s mostly a domestic airline, with just one regularly scheduled longer connection to Copenhagen. The fact that it has just one A330, dedicated to the Copenhagen missions, is also unique. Then there’s the fact that a number of its domestic sectors are flown by helicopter. There aren’t many carriers in the world where your day’s journey might mean connecting from an A330 to a Dash 8 to a Bell helicopter. (See a full list of Air Greenland’s fleet here.)

And Greenland, with its huge landmass, numerous remote communities and shortage of roads connecting them, certainly relies on its airline. It was for that reason (as well as a general fascination with the carrier) that we thought it would be interesting to look at the Flightradar24 data for Air Greenland since 2019.  How much did the pandemic affect it? And did it have equal or different effects on domestic versus international?

Air Greenland’s operations through the pandemic

Flightradar24 data since the beginning of 2019 shows that while the pandemic slowed things down at Air Greenland to some extent, the drop in flights was notably less severe at most airlines. As mentioned Greenland is a big and remote place. For that reason, flight coverage can occasionally be incomplete, but this data is a fairly complete picture of the airline’s fixed-wing operations. It does not cover helicopter operations, so the true number of flights by the airline over this period will actually be a little higher in general. 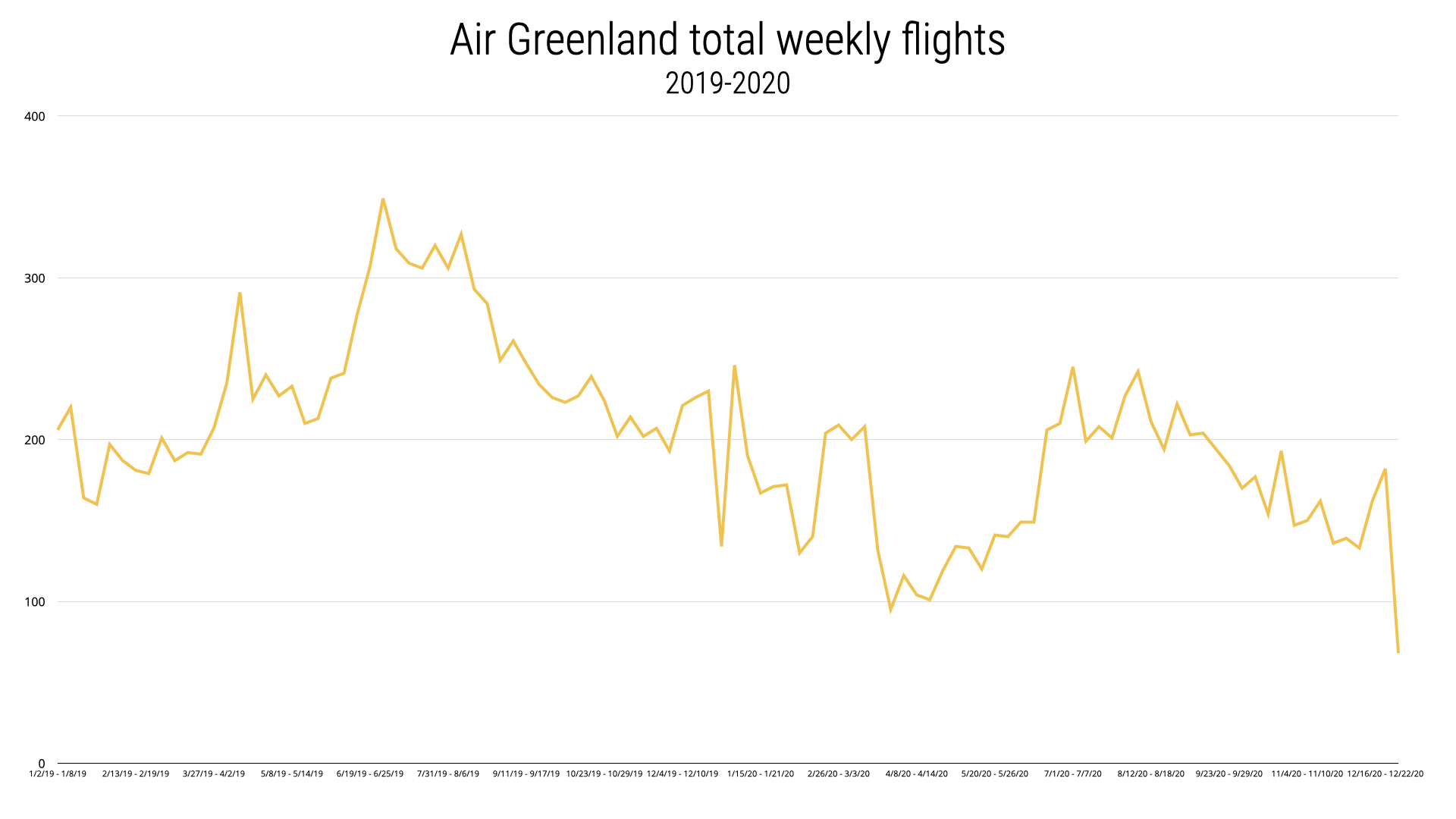 The backbone of Air Greenland’s fleet

Just like Norwegian airline Widerøe, which we looked at in-depth in this article last year, Air Greenland relies heavily on a fleet of trusty old Dash 8-200s for its domestic runs. Picking out just the Dash 8 flights we tracked over two years, we can see that even at the low point in April 2020, they only dipped below 100 weekly flights briefly.

Traffic was down in 2020, including in summer, though again not by so much. July of last year saw around two-thirds of the level one year prior. 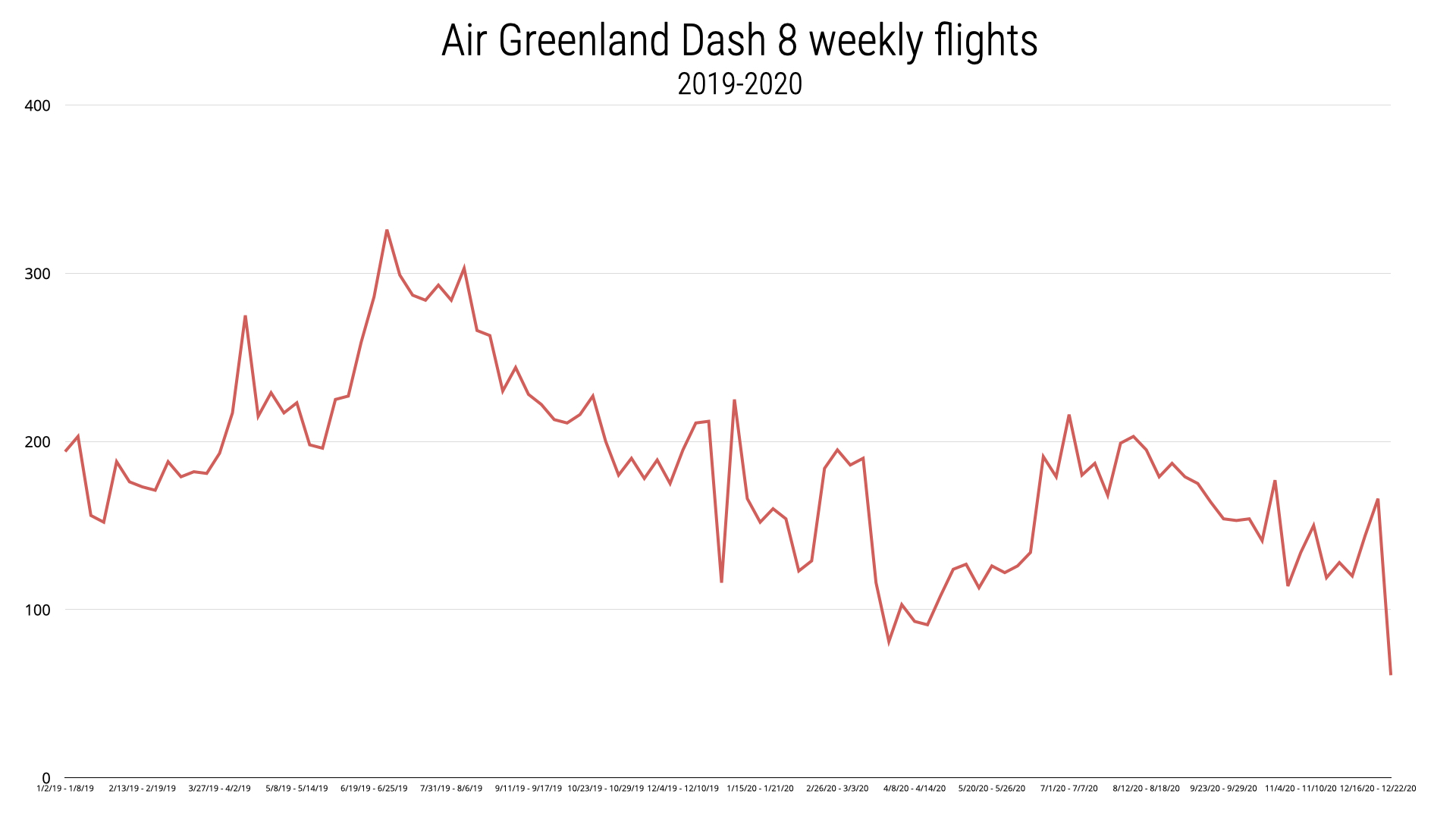 The connection to Europe is important

Considering Greenland’s relative isolation, it’s no surprise that the regular link to Europe is critical. That’s true not only for passengers but also for cargo. Air Greenland recently confirmed an order for an A330-800NEO to replace its existing A330-200 (OY-GRN). Many may have questioned why it would opt for another large plane to do a roughly 4-hour flight to Copenhagen. That would be easily within range of the A321NEO for example – a plane that’s smaller and hence easier to fill and cheaper to operate. One answer to that question is no doubt cargo. The A330 can carry so much more in its belly that even during off-seasons when it may be harder to fill seats, it still makes sense for the airline. 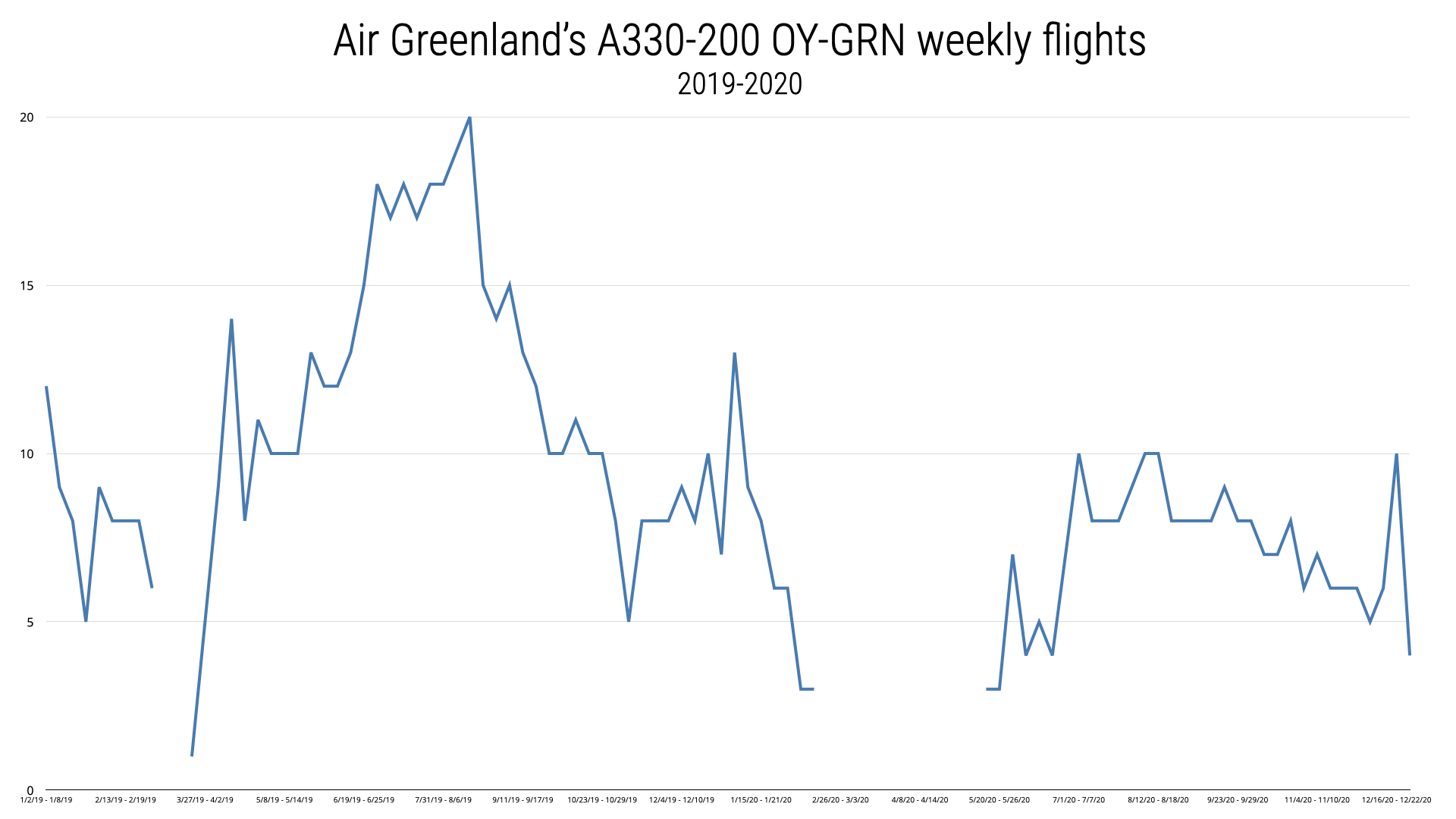 In the A330’s chart we can see that summer is unsurprisingly the peak season for Greenland. The dip in early March of 2019, as well as the dip in March and April 2020, were because of the A330 being out of service. Wet-lease flights in many cases filled in the flying during those periods, as we’ll look at next.

Quite a lot of wet-leasing

With just one A330 in the fleet, Air Greenland fairly regularly needs to bring in hired help to fill in, especially on its Kangerlussuaq (SFJ) to Copenhagen (CPH) flights. That often happens when the A330 is in need of regularly schedule maintenance or an unexpected issue grounds it for a period. Quite commonly a Hi Fly A330 has been brought in to pick up the slack. A319s and A320s from Atlantic Airways (the airline of the Faroe Islands) have also done a few missions under an Air Greenland code.

Not all of the wet-leases have been to cover for the A330, however. The chart below also shows the wide range of wet-leased aircraft that have been brought in. Many of the 737s were Jettime aircraft flying passengers between Copenhagen and Narsarsuaq (UAK) in summer 2019, for example. 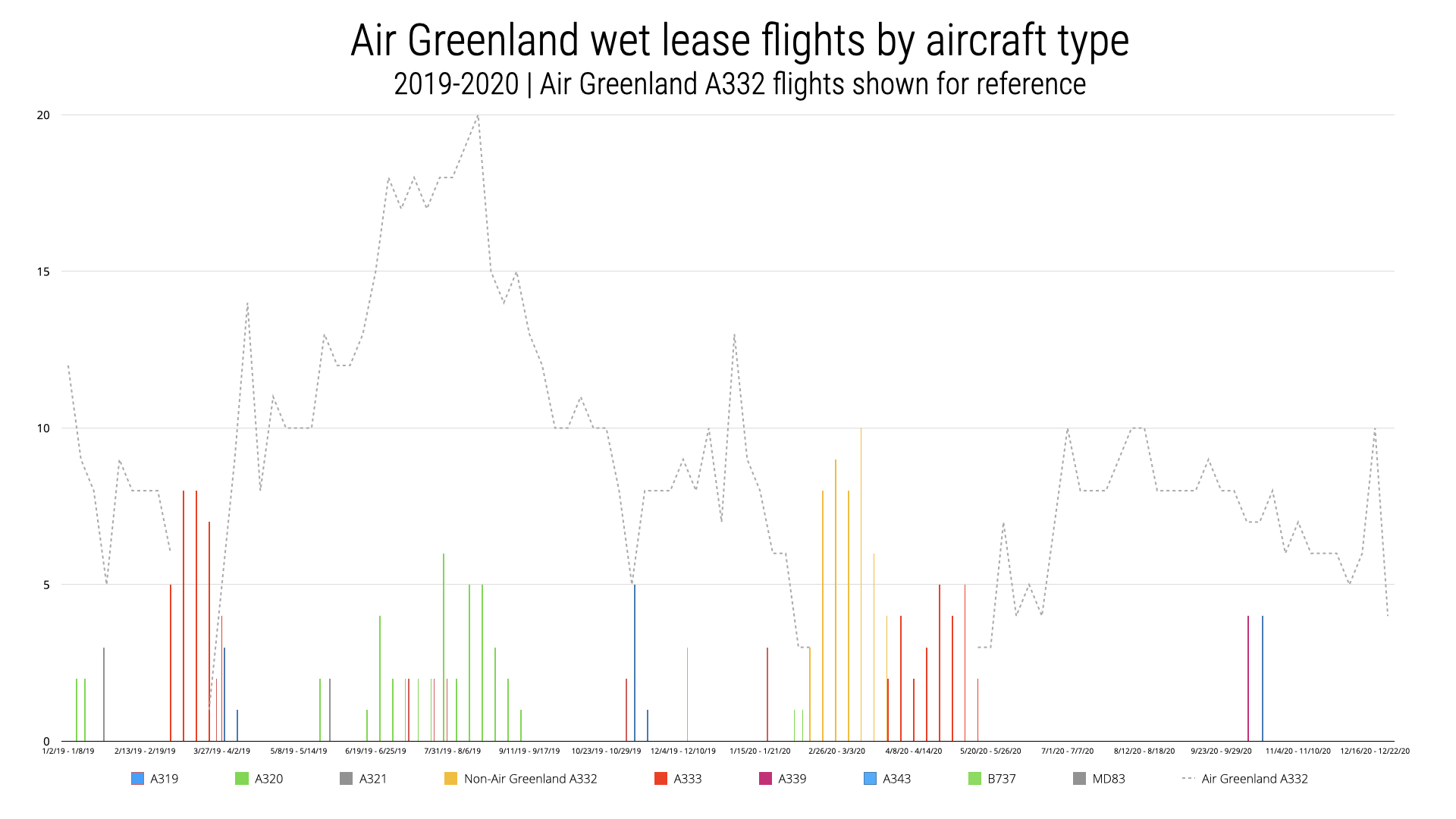 As we (hopefully) emerge from the worst of the pandemic and see flight demand pick up again, it should be interesting times for Air Greenland ahead. There are at least two new airports beginning to be built in Greenland, in the capital Nuuk and the tourist-magnet Ilulissat to the north. Currently the only runway that can reliably handle a plane as big as the A330 is Kangerlussuaq, and most passengers have to continue onward from there to their final destination. The idea is to make Nuuk and Ilulissat capable of handling direct flights from further afield – mainly Copenhagen, but maybe eventually other cities too.

Tourism to Greenland was growing steadily until the pandemic hit, and it will no doubt pick up pace again. Greenland’s government is eager to facilitate more people coming to see the country. As that happens, and as new airports come online, the possibility for new service to Greenland will only grow. Canadian carrier Canadian North has even talked about starting flights from Canada’s far north.

As someone who truly can’t wait to get to Greenland and see it for myself (and to try and fly every aircraft in Air Greenland’s fleet), all of this is great news.